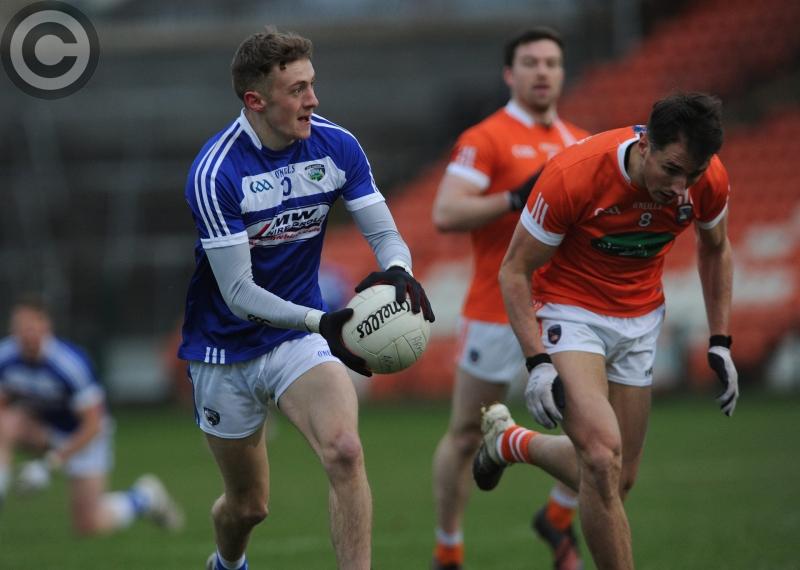 A dramatic comeback from the Laois senior footballers saw them claim a one-point win over Armagh in the Athletic Grounds on Sunday.

Trailing by five points and seemingly headed for defeat with thirteen minutes of normal time remaining, Peter Creedon's men sprung to life, and fought back to claim a one-point win. It was every bit as dramatic as the scenario suggests, with three red cards in the closing stages, a penalty, and missed free from Armagh with the last kick of the game.

Laois started brightly, and even though Armagh took the lead in the first minute through a Stefan Campbell free, the visitors were the better side early on.

Committing more men to defence, they were hitting Armagh on the break, and Cormac Murphy drew them level in the fourth minute. They got through for a goal soon after, when a brilliant pass from Sean Ramsbottom over the Armagh defence allowed Niall Donoher to run clear on goal, and he found the bottom corner.

Danny Luttrell added another point soon after as Laois surged four ahead after 13 minutes, with Armagh wasting a number of chances at the other end.

Another Campbell free left the goal in it, and corner back Paul Hughes then got them within two. Laois hit back with a Kingston free, before he and Oisin O'Neill traded points to leave three in it with seven minutes to go to half time. Laois's forays forward started to slow down after that, and only Armagh's poor play in attack kept them in front.

They hit a bit of form as the half time whistle approached though, and a point from captain Aaron Forker lifted his side. Jamie Clarke and Ethan Rafferty then had a two-on-one break, with Clarke setting up Rafferty 12 yards out. Luckily for Laois, Brody was quick off his line and he smothered the shot.

From the resulting 45, a quick one-two between O'Neill and Forker saw O'Neill land a good point, and midfielder Stephen Sheridan ensured they went to the dressing rooms level with his first score; 1-4 to 0-7 at the break.

Laois started the second half with two early points from Kingston and Donoher, but Armagh took control after that, as Jamie Clarke took centre stage.

The Crossmaglen star first won a free, which Oisín O'Neill pointed, before adding to from play to push his side three clear. Laois sprung Padraig McMahon from the bench to try and curb his growing influence, but Clarke won another free, with Rory Grugan slotted over.

Stefan Campbell the added another as Armagh went five ahead, 0-14 to 1-6, as Laois looked bereft of ideas. They had only managed one shot at goal in ten minutes, a long range effort from Darren Strong which went wide, and didn't even look like scoring in truth.

Things changed dramatically, however, after a Niall Donoher point sparked them back to life. They then punished a sloppy Armagh kickout from that score, as a rampaging Donie Kingston was fouled for a penalty, and converted it himself. Mark Shields was red-carded for his role in fouling the Arles-Killeen man.

Armagh hit back through Jamie Clarke, but Laois were on a roll, and they were causing havoc in the Armagh defence. The home side weren't helping themselves by taking short kickouts or, on a handful of occasions, kicking the ball directly to Laois players, but the mistakes were all a result of the pressure Laois were putting them under.

Kingston pointed either side of a Niall Rowland effort before holding his nerve over a long range free in injury time to level it. Then, from the resulting kickout, another poor one from Armagh, Darren Strong won possession and kicked what proved to be the winner.

It was far from the end of the action, however, as Paul Kingston and Aidan Forker were sent off in injury time, Kingston on a second yellow, Forker on a straight red. There was still time for Armagh to fashion a chance to level the game, winning a free 45 yards out in front of goal.

Oisin O'Neill's stood up to take it, but his shot didn't curl enough, as it tailed off to the right and wide, ensuring Laois held on for a remarkable win.

Main Man
Graham Brody gets the nod for his display between the posts. Made a couple of crucial interventions and one of his runs forward even set up a point. Donie Kingston, Kevin Meaney and James Kelly all impressed on the day as well.

Talking Point
What a result this was, considering the players Laois were missing. A very young side on the field but they dug in really well to get the win. Plenty still to work on, but a very positive showing in response to the Louth game.

Turning Point
Niall Donoher's point in the 60th minute. It got Laois up the field and all that was good about the rest of the game came from that moment onwards.

Ref Watch
Did ok, but was really keeping an eye out for the off-the-ball fouls. The most this reporter has ever seen given in a single game.

Highlight
Donie Kingston's free to level the scores, 45 yards out, into a stiff breeze, was a hell of point to score.

Lowlight
Midway through the second half Laois were really flat, and looked to be out of the running.