Laois caught out by Kerry's second half revival 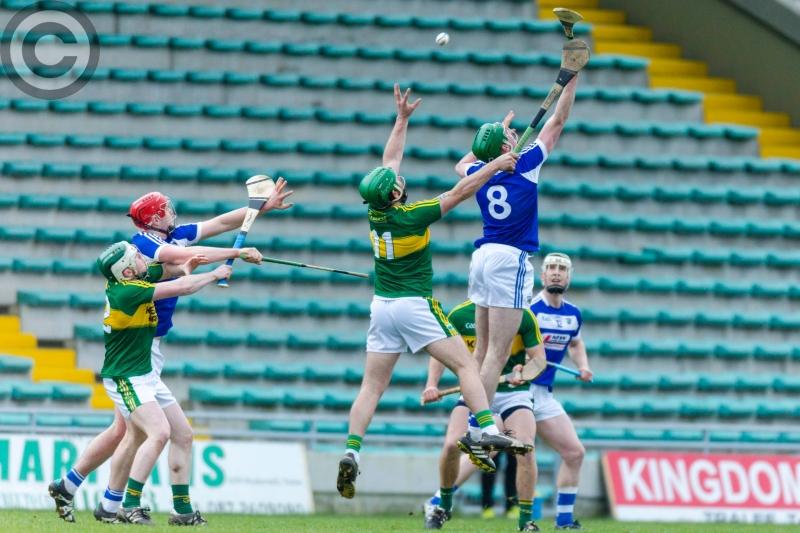 Laois senior hurlers saw a nine-point half time lead evaporate in Tralee on Sunday afternoon, as the home side staged a remarkable comeback to claim an opening round win.

This clash was always going to have a major bearing on the relegation places at the bottom of Division 1B, and an excellent first half performance from Laois appeared to have them in the driving seat.

With Picky Maher deadly accurate from placed balls and Kerry misfiring at the other end of the field, Laois lead 0-13 to 0-4 at the interval and the win only seemed a formality at that stage.

Kerry, understandably, started the second half strongly, winning a penalty in the opening minutes which Padraig Boyle converted. Despite that early setback, Laois hit back with a couple of points and appeared to be handling the home side fairly well, but two goals in a minute from Kerry midway through the half was the beginning of the end for Laois.

The hosts stormed towards the final whistle, and had wrapped up a 13 point second half turnaround by the final whistle. It is a very disappointing loss for Laois, but as manager Eamonn Kelly pointed out afterwards, they don't have time to feel sorry for themselves as Offaly come to town this Saturday night.

It had all looked so promising for Laois in the early stages, as the impressive Willie Dunphy and Neil Foyle both hit the target. Picky Maher then rifled over a couple of frees and Laois were four ahead after as many minutes, with Kerry struggling to live with them.

Shane Nolan finally opened their account with a free, but the pace of the game started to pick up after that with a blistering spell of play. Picky Maher and Nolan traded points from frees before Eoin Fleming made a stunning save to deny Jordan Conway a goal for Kerry.

That save gave Laois a real boost of confidence, and they kicked on from there, with Picky Maher tapping over another free and Paddy Whelan adding another from play, Eamonn Kelly's side now really hitting their stride.

The next few minutes were all about Willie Dunphy, who showcased just how dangerous he can be. The Clough-Ballacolla man can be a prodigious scorer when he gets his eye in, and he hit three in four minutes to leave the home side stunned.

Nolan again replied for Kerry but a Maher free and a point from play by Ben Conroy had Laois on control. Nolan's freetaking was letting Kerry down at the other end of the field, and when the half time whistle sounded, the O'Moore men were 0-13 to 0-4 ahead.

The warning signs came early for Laois when play resumed, with Padraig Boyle winning a penalty two minutes after the restart. He took it himself, and found the bottom corner.

Laois initially responded well, with Picky Maher pointing twice from frees to almost cancel out the goal. Willie Dunphy then saw a snapshot for goal clip the post and and go wide, and luck and momentum were now deserting Laois.

Kerry were growing in confidence and Mikey Boyle, Shane Nolan, Colum Harty and Daniel Collins all pointed to crank up the pressure on Laois. Picky Maher did his best to relieve it, as he pointed another brace of frees either side of a second score for Daniel Collins, but there was an air of inevitability about what was happening now.

Eoin Fleming was again called into action as Kerry were on the hunt for goals, and they wouldn't have to wait too long.
The first to strike was wing-forward Jack Goulding when he pounced on a breaking ball in the square, and Colum Harty then ghosted through to get their second.

With the bit between their teeth Kerry kicked for home, and a flurry of late points from them got them ahead for the first time, and with Laois unable to respond, Kerry cruised home in the end. It's Offaly up next now, as Laois took to bounce back.