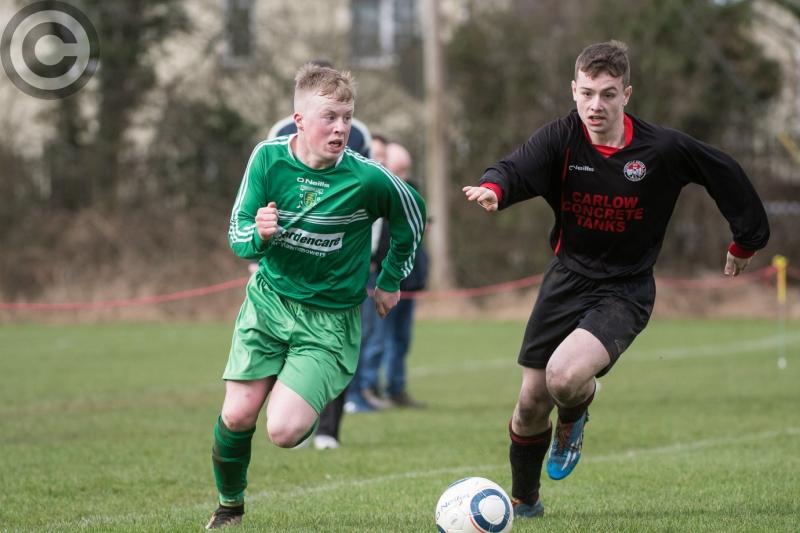 in arguably the biggest game Portlaoise U-18s have played to date in their young careers, they were left feeling despair as they were knocked out at the last sixteen stage of the SFAI Cup on Saturday to a strong outfit in Parkville.

In truth, Portlaoise can have no regrets about the game, as their goalkeeper, Sean McCormack, pulled off some splendid saves to keep them in the tie.

The first half was a one of both teams trying to feel each other out, with both not taking many chances going forward. Portlaoise had the opening chance of the game with Brian Sheehy taking down a Craig Reddin cross, but he pulled his shot wide.

Craig Reddin would then take on a shot from long range, but Parkville keeper Alan Maher Broderick was never in trouble.

Parkville had their first substantial chance of the match when Griffin Kennedy found space in the box for himself, but Sean McCormack proved equal to the attempt. A few half chances for both sides followed, but none really troubled the keepers at either end of the pitch.

However, Parkville would grab the first goal of the game after 38 minutes. Griffin Kennedy was again causing trouble for the Portlaoise defence, and got his reward when his cross was taken down by Ross Hanley. He was given far too much time in the box, and easily finished past a helpless McCormack to get the only goal of the first half.

Portlaoise knew they had a lot to work on as the half time whistle blew, but there were enough chances there from the first half to give the home side hope.

Portlaoise came out the sharper in the opening minutes of the second half and Fionn Scully levelled the scores from the penalty spot. The spot kick resulted from Keith Ryan’s ball into Niall Doran, who was first to the ball and earned the penalty. Scully made no mistake from twelve yards.

McCormack was forced into action from the kick off, as he pulled off a fingertip save to keep Jamie Farrell’s audacious chip from floating over him. Fionn Scully then went within inches of finding the back of the net, with a long range shot that rattled off the crossbar. Brian Sheehy then had his header cleared off the line, and you could sense Portlaoise’s second goal was coming.

However, the tide turned when Parkville scored a second against the run of play. Substitute Craig Stounton dribbled past three Portlaoise players without a sweat and coolly finished to put his side back in the lead.

McCormack made some terrific saves to keep his side in the game for the next ten minutes, but Parkville’s relentless pressure would pay off. Griffin Kennedy ran through the heart of the Portlaoise defence, and composed himself to claim the insurance goal that would send his side to the last eight of the SFAI Cup.