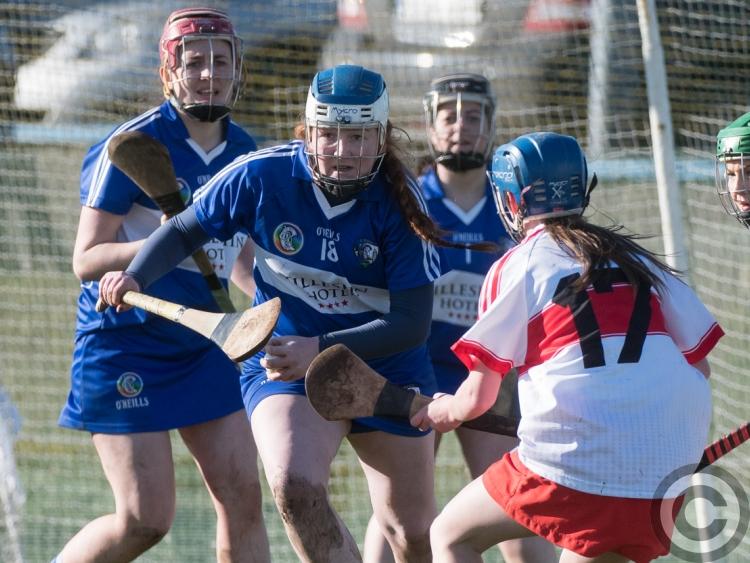 Niamh Coss, Laois breaks to clear this ball in their Camogie National League clash with Down. Photo Denis Byrne.

Laois played host to Derry in the second round of the Littlewoods Ireland National Camogie League Division 2 in Mountmellick on Sunday.

After the heavy spills of rain the pitch was soft but playable, with a cross wind not helping either side on the day.

Laois started off well but were up against a very strong Derry team. Derry goalie Niamh McQuillan pulled off a great save in the opening minutes and it was the same case with the Laois goalie Laura Dunne pulling off some of her own saves of the day, with a penalty saved on the line nine minutes into the game.

Scores were hard to come by but Derry got easy ones from scorable frees taken by Karen Kielt. Sarah Anne Fitzgerald scored two points from frees awarded and a point by Linda Keyes in the 28th minute to bring half time score Laois 0-3 Derry 0-6.

The second half started off well for Laois with Sarah Anne converting a free. However, Derry didn’t stay quiet for too long with two points tapped over in quick success before Mairead McNicholl scored a goal, as Laois had to work hard to get any score.

The Derry goalie saved a cracker from Joan Dollard who received a short free from Sarah Anne Fitzgerald.