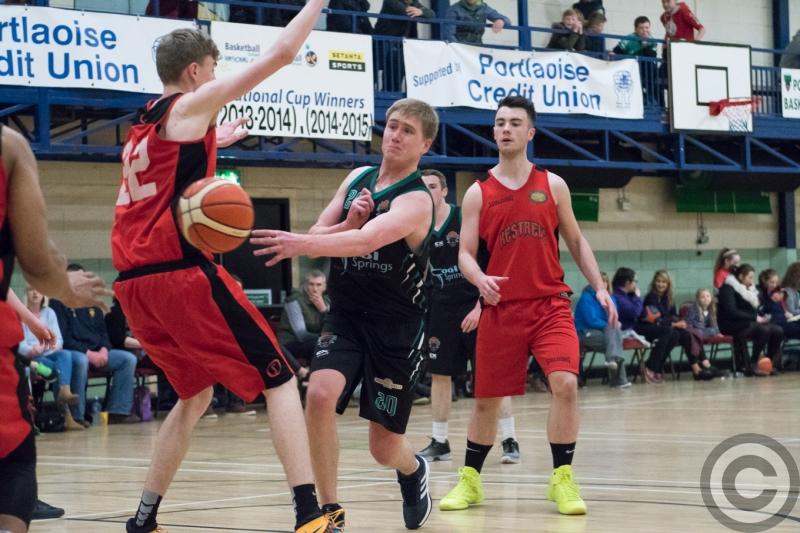 Portlaoise Panthers took on Kestrels in the Midland League on Sunday night in St Mary's Hall, and the crowd in attendance were treated to an unbelievable game which went down to the last play in double overtime, with Kestrels just holding on for the win.

A busy weekend schedule saw Kestrels suit up for their third game in succession, but it wouldn’t take much for them to stay motivated in this local derby game. They were in hot form following an impressive victory the previous night in the National League, and Portlaoise knew that they were up against it following their blowout loss in the Midland Cup last month.

Portlaoise Panthers were looking for an improved performance and got the reaction they were looking for as they held an early lead through scores from Peter O’Sullivan, Peter Duignan and Jack Scully. Kestrels American guard Chris Teasley was in top form early on keeping the visitors ticking over with two quick scores.

Liam Guinan struck from deep with the first three pointer of the game but this was cancelled out by two baskets under the boards by Peter Duignan and Kyle Burke. Kestrels sat in a busy zone defence for the game with Portlaoise taking their chances in a man to man. The Panthers defence collapsed in on the Kestrels big men but that left room outside the arc where Debosz and Teasley took their chances with two big three pointers.

Benny Carroll found room in the corner in offence where he picked up his first points of the game to draw the game level at 15 apiece. Indiscipline in the Portlaoise defence allowed Kestrels head to the line to finish the quarter with both Debosz and Aaron Whelan converting. A late basket from Peter O’Sullivan drew the sides level after ten minutes of play on a scoreline of 18-18.

The second quarter saw both sides making a run with Portlaoise coming out with the first two baskets with Jack Scully picking up the first basket underneath while O’Sullivan found his range from the three point line.

Kestrels regrouped and baskets from Aaron Whelan and Chris Teasley left just one point between the teams. The differing defences were winning out for large periods of the quarter with both teams finding it difficult to make inroads. Jack Scully was using his experience inside the key finding the gaps and finishing another two scores for the home side.

But Aaron Whelan ended the quarter well for the Kestrels men scoring their last five points following great post up play. Jack Dooley brought the game level once again at the end of the half hitting two from two at the line to leave the scores at 32-32.

Portlaoise were definitely the happier of the sides at this point as they were well in the game against a panel that are currently competing on the National stage this year. Patient build up play by Portlaoise was important to their success as it allowed them to pick holes in the Kestrels defence with Kyle Burke getting to the board and finishing off the first score of the third quarter.

Debosz remained a handful for Portlaoise on the defensive end as he scored another basket while drawing defenders and allowing his team mates more space with Teasley hitting another three pointer from deep. The game was being played at a frantic pace at times and scores were starting to come thick and fast.

Jack Dooley was cutting open the Kestrels defence hitting another two mid-range efforts but again Teasley, Conor Foster and Debosz replied in kind. Kestrels were beginning to get the upper hand as Guinan and Teasley added further scores for the visitors but two more three pointers from O’Sullivan gave Portlaoise some hope heading into the final quarter.

The fourth quarter saw the lead change hands time and again as both sides looked to gain the upper hand. Kestrels had their two stand out players to thank for their fourth quarter scores as Teasley and Whelan accounted for fifteen of their seventeen points in this period. Teasley took on the Portlaoise defence and got to the hoop with ease.

Aaron Whelan used his speed to great effect getting out on the break and punishing any poor Portlaoise turnovers. Benny Carroll kept Portlaoise in it with a brilliant break away basket and followed this up with a big three pointer. Portlaoise were beginning to work the ball better in offence and added another two three-pointers from Dooley and O’Sullivan which kept them well in the game.

The lead changed hands numerous times late on which kept the crowd on the edge of their seats. Chris Teasley composed himself to hit two free throws with under a thirsty seconds remaining to give Kestrels a one point lead and with just two seconds remaining in regular time Jack Dooley was fouled and sent to the line with a chance of putting his side ahead. Dooley missed his first attempt but made his second free throw to bring the game to overtime.

The game didn’t deserve a losing side as both teams had given their all in regular time and this was evident as tired bodies found it hard to break down the opposing defence. The extra five minutes saw both sides scramble to keep out their players.

Teasley was again the go-to player for Kestrels as he scored Kestrels three points in this period while Peter Duignan replied with a lovely mid range effort and O’Sullivan hit one from two from the line to bring the game to double overtime.

Every defensive and offensive play was extremely important at this stage of the game as scores were hard to come by. It was again Whelan and Teasley that would step up for Kestrels on the offensive end as they combined for their sides seven points in the final period.

Portlaoise battled hard and a fine drive to the basket by Jack Dooley resulted in a score while O’Sullivan hit his fifth three pointer of the game to put just two points between the teams. Portlaoise had the final opportunity to either draw or win the game but were unfortunate to run out of time as the buzzer went before they could get a shot off giving Kestrels the victory as they remain unbeaten in the Midland League.

This was an exciting game with some excellent basketball played by both teams with the crowd getting fully behind their players. Portlaoise remain in third place in the table and will hope to cement this place and avoid the possibility of meeting Kestrels in the Top 4 semi final on the May Bank holiday weekend.