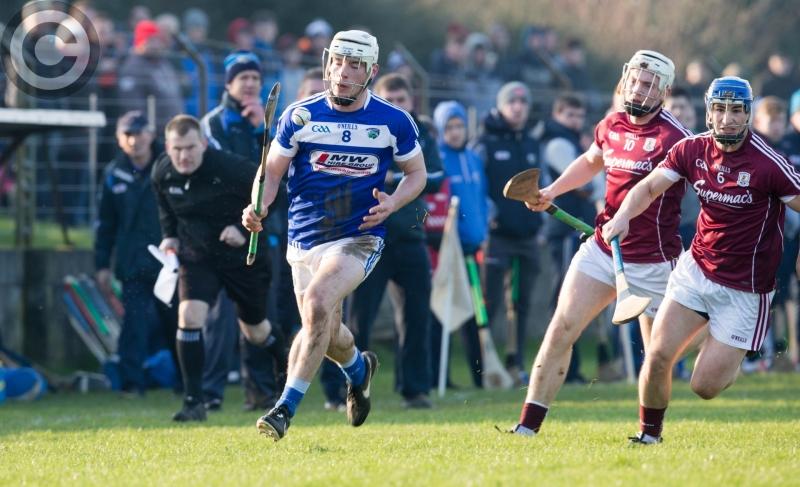 Ben Conroy on the attack for Laois against Galway in Rathdowney. Pic: Alf Harvey

LAOIS hurlers felt the full force of a Galway backlash on Sunday afternoon, falling to a 26-point trouncing in the third round of the National League Division 1B in Salthill.

With the Mannion brothers back from club duty, Micheál Donoghue fielded his strongest XV of the campaign to date and Galway played with real intent from get-go, no doubt still smarting from local criticism and with a point to prove after allowing a winning hand slip away against Wexford a fortnight earlier.

Laois gave Galway plenty of it under Cheddar Plunkett's reign, but the Tribesmen put their understrength line-up away with ease on what was an afternoon to forget for the visitors.

Their scorers-in-chief against Offaly and two of the stars in IT Carlow's run to the Fitzgibbon Cup final, Stephen 'Picky' Maher (broken finger) and Cha Dwyer (tonsillitis), were among the absentees and Laois never seriously troubled Galway in a match that was over from an early stage.

Paul Flaherty set the onslaught in motion within seconds of the throw-in and backed by a stiff wind blowing from the Árus Bóthar na Trá end, Galway clocked up nine unanswered points with barely seven minutes on the clock.

Laois were obliterated on their own puck-out and though 'keeper Eoin Rowland attempted to mix it up, long or short the net result was generally the same as Galway possession was quickly translated into a white flag.

Cathal Mannion and Jason Flynn shot two apiece, while David Burke, Daithí Burke, Joseph Cooney and Thomas Monaghan also got in on the act. Some of Galway's interplay and creation of space was superb and there was no absolutely wastage in their shooting early on.

Laois' first attempt on goal came courtesy of a well-worked Adrian Corby point on nine minutes and though Patrick Purcell followed it soon after, it proved a brief interlude to the Galway procession.

Padraic Mannion and Flaherty added further points and when Conor Cooney made it 0-12 to 0-2 in the 13th minute it meant all of Galway's starting forward line had chipped in with scores.

Ross King floated over a free for Laois' third on 18 minutes and although some sloppiness crept into Galway's play in the attacking third, they moved further clear with a delightful Conor Cooney point the highlight as Paul Killeen became their 11th different scorer and Cathal Mannion, Thomas Monaghan and Jason Flynn all brought their individual tallies to three points apiece.

Cian Taylor and Ben Conroy, who carried the Laois fight as much as anyone, struck late points but, in the main, it was one-way traffic. Rowland also dealt well with goal attempts from both Jason Flynn and Joseph Cooney during the half, while the wide count statistic of Galway's six to none for Laois also told a tale as the home side took a 0-20 to 0-5 lead down the tunnel.

Even with the elements in their favour, it was a damage limitation exercise for Laois in the second half. King followed a point from open play with one from a placed ball before Galway struck another rich vein with 1-7 coming without response as they moved 24 points clear.

About all that was missing from their performance up to then was a goal and that was addressed in the 43rd minute when Paul Flaherty and David Burke combined for Cathal Mannion to fizz a stinging shot to the net.

It was all too easy, with far too much space and time afforded to Galway players. Mannion would finish the day's top scorer with 1-5, while Flaherty capped an extremely productive hour with five points of his own.

Joe Canning's return from the severe hamstring injury is being carefully managed and the 27-year-old converted a 56th minute penalty, following a foul on Jason Flynn, to go along with two points from play, while another sub before Conor Whelan finished Galway's third goal.

King brought a 17-minute Laois drought to an end before Stephen Bergin flashed the sliotar to the net after they had sliced through the centre of Galway's defence.

King then brought his personal tally to five points and Neil Foyle found the target late on, but they were mere footnotes as a miserable day was compounded by an injury that led to Dwayne Palmer, one of Laois' best players, being helped from the field deep in injury-time.

Next for Laois is meeting with Limerick at O'Moore Park on Saturday evening (throw-in 7 o'clock), while Galway travel to play Kerry on Sunday afternoon.