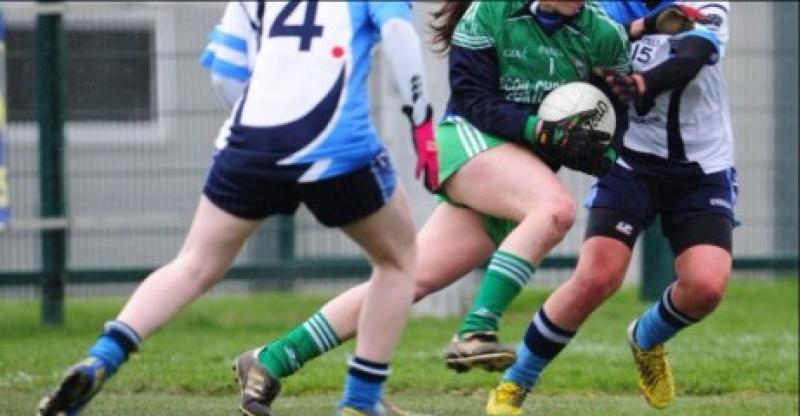 Scoil Chríost Rí saw their dreams of All-Ireland glory end at the semi-final stage on Tuesday, as they lost out to St Ciaran's from Ballygawley at Ashbourne.

The Ulster side, boasting five Tyrone senior panellists, struck for five goals either side of half time, and that was enough to get them over the line. Scoil Chríost Rí dominated the game for spells, but those Ballygawley goals proved crucial.

It was a bright start to the game for Scoil Chríost Rí, who took an early lead through Erone Fitzpatrick. All the play was in the Ballygawley half of the field, and Gráinne Moran soon doubled their advantage with a free.

Instead of pressing home their advantage, however, some poor shooting started to let the Portlaoise girls down. A handful of good scoring chances went a-begging, and as the half progressed they would be left to regret that waste.

St Ciaran's took their time to put them under pressure, but they almost opened their account with a goal, only for Chloe McCaffrey's shot to find the side-netting.

The same player would finally get their opening score in the 13th minute, when Chríost Rí had a free awarded against them for a kickout not going far enough. McCaffrey slotted over the resulting free, and Ballygawley were up and running.

Six minutes later, McCaffrey cut in from the left wing and fired low past Aimee Keane, as the Ulster side started to show what they were capable of. Chríost Rí responded well though, and a quickly-taken free found Jenny O'Neill in space 25 yards out, and she popped it over the bar.

Unfortunately that would be their last score of the half, as Ballygawley, with wind advantage, took control of proceedings coming up to the interval.

Maria Canavan, niece to Tyrone legend Peter, pointed from 20 yards out, before another powerful run from McCaffrey resulted in their second goal. Moments later, Tara O'Hagan's shot for a point looped over Aimee Keane and under the crossbar for a third goal.

McCaffrey added another free just before the half time whistle sounded, and those three goal separated the teams at the break, 3-3 to 0-3.

Chríost Rí needed a strong start to the second half, and they duly got it when Emma Lawlor was fouled in the square, and Gráinne Moran rolled home the resulting penalty. That was a timely boost for her side, but Ballygawley hit back in devastating fashion.

Maria Canavan rifled home their fourth goal from the edge of the area, and McCaffrey brought up her hat-trick from close range, as they now lead by twelve points, 5-4 to 1-4.

All looked lost for Chríost Rí, but they completely dominated the remainder of the game, and threw everything they had into getting a result.

Ballygawley defended in numbers and stifled them as best they could, but points from Emma Lawlor, Erone Fitzpatrick and Isabella O'Toole ate into their lead.

Portlaoise needed goals though, and their best chances came with seven minutes to go when they won another penalty. This time, Grainne Moran's shot went agonisingly wide. She had another chance from play moments later, only to be denied by a last-ditch block from Meabh Corrigan.

They battled on to the final whistle, but they had left themselves with too much to do, as their brave bid for an All-Ireland title was ended at the semi-final stage.