Cycling sussed, dinner etiquette, and the simple joy of seeing someone fall off a skateboard 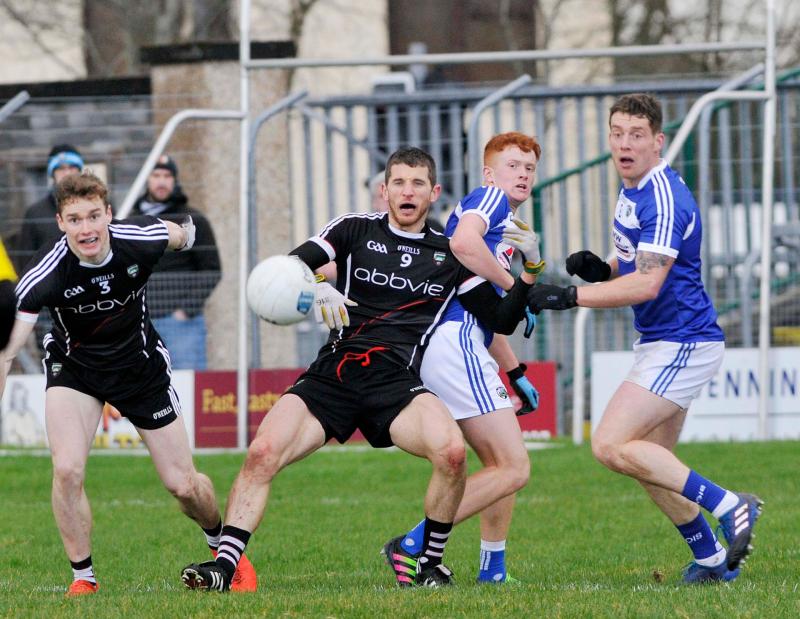 Darren Strong and James Kelly eye up this ball along with Sligo's Adrian McIntyre and Kevin McDonnell on Sunday.

And so, it was back to the road. After a brief hiatus as Laois had a home game last weekend, my GAA wanderlust returned as I had the pick of two Connacht citadels - Galway or Shligo. Sorry, Sligo.

I opted for Sligo, having never been there before, and also because I was owed a report from the Tuam Herald, which covered me on the hurlers trip to Galway. So, with a heart full of hope and a stomach full of porridge, I set off for the north-west.

Heading the Athlone-Roscommon-Boyle route, it was all mostly new territory for me once I got off the M6, so I eagerly anticipated what the journey had in store for me. As it turned out, the first thing that struck me was that Sunday morning appears to be the official time of the week dedicated to cycling.

Dotted along the route - Tullamore, Athlone and Lecarrow in particular - were packs of cyclists, all paired off as they proceeded two-by-two, like they were heading for Noah's Ark.

Having no one in the car to discuss this phenomenon with, I was left to speculate on why these people spend their Sunday mornings at this aberrant behaviour, and eventually I came up with a theory I was happy with - they are lapsed Catholics.

After a childhood of Sunday mornings being dragged to mass, they have been left horrified by the idea of spending a precious weekend morning genuflecting to our Lord. However, the great by-product of a Catholic upbringing - an ability to feel guilty about absolutely anything - means they still can't force themselves to do anything pleasurable or joyful in its place.

So, they drape themselves in as much flourescent clothing as they possibly can, and spend the morning in a tightly knit group, looking at the arse of the middle aged man in front of them getting bisected by a horrendously uncomfortable saddle. Each to their own I suppose, but once cycling has run its course, I'd imagine attendances at mass should improve.

As I press further into Roscommon, I meet a sign which urges me to 'Visit the Clay Pipe Museum' in Knockcroghery, but I don't. There's only a certain amount of excitement any of us can handle in our lifetime.

The longer I was on the road in the West, the more Catholic iconography started to rear its head. From grottos, shrines and graveyards, to light reflectors on the side of the road in the shape of a crucifix. To hammer home the point, there was also a sign which read 'Jesus, I Trust In You' on the side of the road in Sligo. While Catholicism might be on the wane nationally (because of the cyclists, obviously), you can see how it could hold on in a place like this.

If I had to spend most of my life looking at stone walls, farming bad ground and having one of my best friends be a sheep, I'd probably sign up to any organisation which promised me that things would get better once you're dead.

I eventually made it to Sligo, with time on my hands to get dinner and have a quick walk around the town before the game. I was almost instantly rewarded for this.

As I ambled along, a young skateboarder rolled past me in the middle of the street, clad in a leather jacket, while his two dogs trotted alongside him. It was an impressive display of cool and control from the teenager, and he maintained this too-cool-for-school facade right up until one his dogs made a hard left in order to urinate on a lamp post, pulling the young man clean off the skateboard in the process, and leaving him in a crumpled heap on the side of the road.

This instantly justified my decision to come to Sligo, and is already in the top three of my 'Things To Have Witnessed Following Laois' list.

Still in search of dinner, I headed into the first open premises I find, a place called Eala Bhán, by the river. It is completely empty, and I ask the waitress if they are open. "We open at 12.30 for lunch" she informs me, and a glance at my phone tells me it is 12.31. I currently appear to be the most eager lunch goer in Sligo, but in the midst of this exchange, I have overlooked a crucial fact - this restaurant is far too fancy for a sports journalist to eat in.

When on the road covering a team, eating should be confined to a handful of places - your car, a motorway service station, a carvery, or, if you're feeling a bit fancy, the bar area of a hotel on the outskirts of whatever town you are in. In essence, you should only eat in the kind of establishment where everything on the menu comes with chips, but Eala Bhán is a different beast entirely.

I shouldn't be eating in a proper restaurant, but I've engaged in conversation with the waitress now, and social norms prevent me from turning my back on her and running.

The restaurant has awards and recommendations everywhere, a quote from WB Yeats on the wall, and the cutlery is already on the table. This is indeed a strange occurrence, as it means it will not now be handed to me wrapped in a napkin, along with a collection of ketchup and mayonnaise sachets, as I'm accustomed to.

I allow myself a smile when the waitress brings me the wine list, seemingly oblivious to my GAA-hoody-and-wooly-hat combo. I am given a complimentary amuse bouche of spicy tomato soup, and follow it with pan-fried salmon, purple mashed potato and seasonal vegetables. Even the lemon wedge with the fish has been fussed with, contorted into an impressive shape, like citrus origami. Sauces are spread across the plate like some kind of homage to abstract art, and the whole thing looks very impressive (see below). 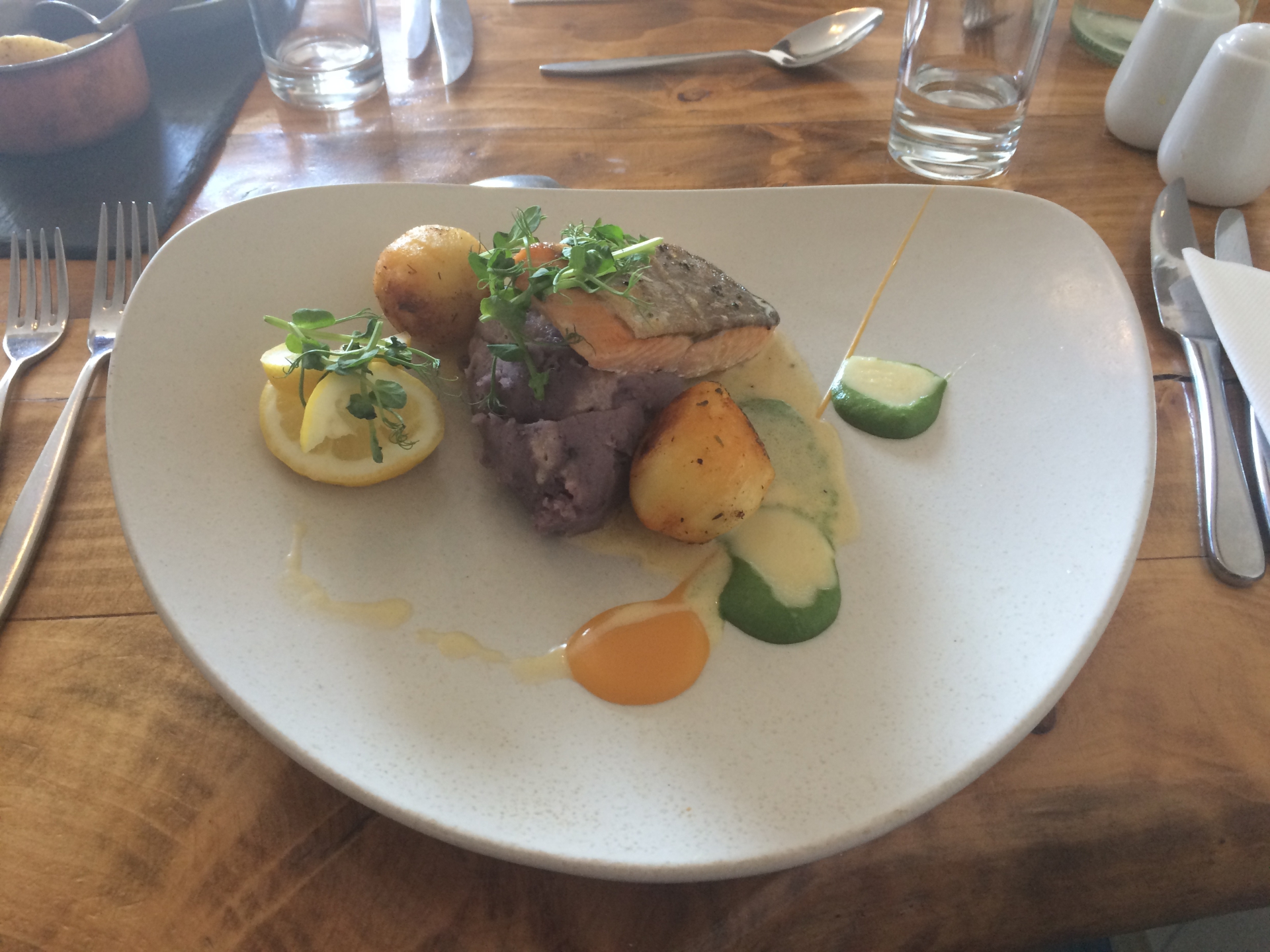 It is undoubtedly delicious, but I can't get over the thought that I shouldn't be here, so I skip dessert, settle the bill, and head for Markiewicz Park.

For 30 minutes, Laois' performance easily matched that of my dinner. It was easy on the eye and there was some substance to it. They were bossing the game, picking off scores at ease and getting some joy out of direct balls into the Kingston brothers.

Then, Kevin Meaney's moment of madness lead to a noticeable shift in mood. Sligo players knew they had been thrown a lifeline, and coming when it did, just before half time, it allowed their management team time to plan for the second half.

Laois hung on for as long as they could, but were eventually reeled in with normal time almost up. It was bitterly disappointing, and for all the effort and good work that is being done, Laois just can't seem to translate it into a victory at the moment.

Peter Creedon appears relatively calm all the same, although he rarely seems too ruffled. He is only half way through his first league campaign as Laois manager, but he is now facing into some crucial games, starting against an improving Antrim team, in Antrim.

Laois fans would have liked promotion this year, but would probably take not being relegated. At present, relegation is a definite possibility, and support continues to ebb away. For the sake of the players and everyone else, here's hoping they can win their remaining three games, and get some bit of positivity back associated with the team.

With the game over, it was back to the car, and time to unleash the essential ingredients of a long road trip - a few good podcasts and a bag of jelly snakes. It's not an easy drive, but there was at least one bonus to the return journey - the cyclists had their penance done, and the roads were that bit emptier.

I still didn't visit the Clay Pipe Museum though. Maybe next year.

I had the pleasure of a bonus road trip this week, going to Ashbourne on Tuesday to watch Scoil Chríost Rí Portlaoise in the All-Ireland senior 'A' semi-final.

They met an incredibly strong team in St Ciaran's from Ballygawley, who had five Tyrone senior panelists in their ranks. Goals win games, they say, and Ballygawley got five of them, so they won.

Chríost Rí fought like hell though, and completely dominated the last 20 minutes or so. They just couldn't get the goals they needed, but there were audible sighs of relief from the Tyrone contingent when the final whistle sounded.

The most memorable part of the game arrived after the final whistle, however. Having lost a game of that magnitude, the Chríost Rí players still provided a guard of honour to applaud St Ciaran's off the field.

While so many management teams focus on teaching their players how to win, teaching them how to lose properly is rarely addressed. John Scully, Pat Critchley, Liam Dollard and everyone else involved with them deserve a lot of credit for that.

You just can't help but be impressed by the school at the moment.