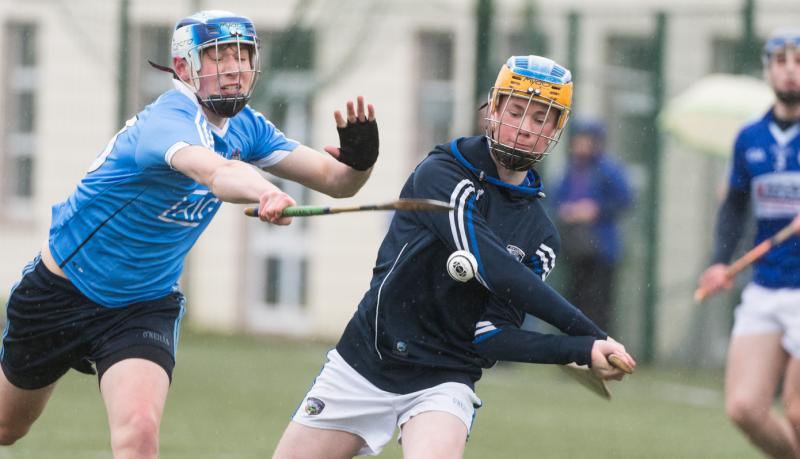 Cathal Dunne, Laois about to send this ball long against Dublin in their Leinster M.H.C game. Photo Denis Byrne.

The Laois Minor hurlers got their League campaign off to a winning start as they held off a late Dublin comeback to claim a deserved two-point victory in miserable conditions in Heywood on Saturday last.

Dublin opened the scoring with a free from centre-forward, Cian Derwin, and he doubled his tally, and Dublin’s lead, shortly after with his second converted free of the day.

Laois registered their first score through a Ciaran Comerford free with thirteen minutes played. Comerford went on to add a second three minutes later before Laois lifted the first green flag of the day.

Blood-substitute, Ciaran Conroy, made an instant impact for the Laois men as he cleared the path with a great run before laying off the ball to Brandon McGinley rifled the ball past Gibbons for the first goal of the day as Laois took the lead for the first time in the game. Comerford followed up with his third free of the half as Laois settled into the lead.

Joe McCormack looked to have increased their lead to five points through Joe McCormack’s point, but Dublin were right on their tails with Derwin slotting one of his own as the game reached the twenty-minute mark.

Laois restored their five point lead a minute later with wing-back, Padraig Delaney, landing a huge free from range to extend the lead. Derwin pulled one back for the Dubs on the twenty-five minute mark, but Laois responded superbly with their second goal arriving a minute later when Comerford’s long-range free got the better of Gibbons in the Dublin goals to raise their second green flag.

Corner-forward, James Keyes, pushed the Laois lead out to eight points with a well-taken score, but Dublin rallied in the final minutes to cut the deficit to six points thanks to a Derwin brace to leave the half-time score at 2-6 to 0-6 in favour of the Laois men.

Laois restarted the scoring with Comerford splitting the posts two minutes into the half, and Keyes followed up with his second to restore the Laois lead to eight points.

Derwin’s seventh point of the game came after thirty-eight minutes, before Kevin Desmond became only the second name on the Dublin scoresheet with his first of the day.

A brace of frees from Comerford once again restored the eight point cushion for the Laois men as the game entered the final ten minutes. Unwilling to lay down, Dublin went on the attack and notched 1-2 in two minutes with the goal coming from substitute Kevin Kirwan as the Laois lead shrank to four points.

James Keyes brought his tally to three at a vital time for Laois as he put five points between the sides, but a Derwin brace and a monster-free form centre-back, Tom Aherne, cut the margin to a single point with two minutes to go.

Laois looked strong a closed out the game with McCormack adding his second as Laois held out to claim a deserved two point victory as they now have a bye-week to look forward to, before a challenging test against Kerry.