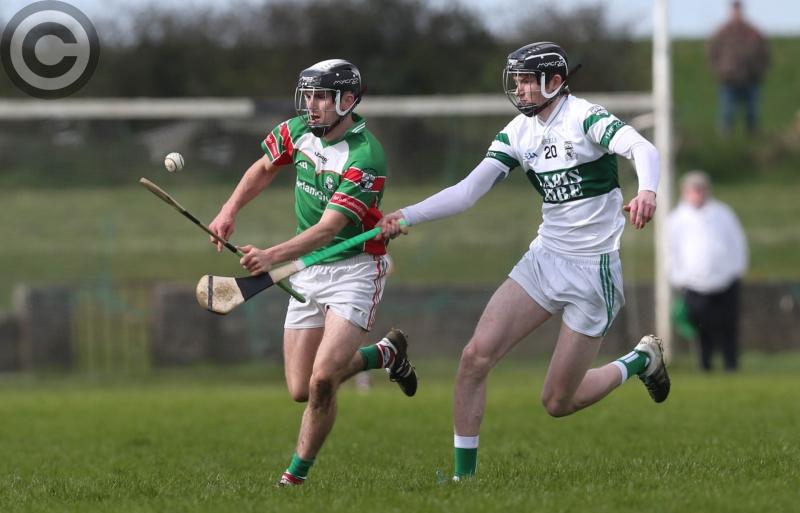 A strong finish from Rathdowney-Errill ended a brave challenge from Portlaoise in the opening round of the ACHL Division 1 on Sunday.

Rathdowney-Errill opened the scoring in a game played in tough conditions. Paddy McKane who was, their biggest threat throughout the game, swung a free neatly over the bar against the wind.

Portlaoise struggled to make the wind advantage count early on with a few poor wides. Paddy Whelan added another for Rathdowney before Aaron Bergin got Portlaoise off the mark from a placed ball. McKane hit back with two brilliant individual scores before adding his second free of the game.

Portlaoise then hit their purple patch; Bergin added another two points from frees before a long puck out caused havoc in the Rathdowney full back line, the ball broke to Shane Whelan who flicked it to the unmarked Seanie Culleton, Culleton spun and shot in the same movement burying the ball in the far top corner to give Portlaoise the lead.

Rathdowney struck back to narrow the lead but another two points for Portlaoise before the break gave them a three-point lead facing into a stiff breeze for the second period.

The second half was a tightly contested affair, weather conditions were difficult and wind advantage wasn’t paying much dividend to either team. Rathdowney-Errill were the quicker out of the blocks and Paddy Meehan got the home sides first score before a long range free from Liam O’ Connell left just the minimum between the sides.

Portlaoise were not going down without a fight, and Bergin pointed two more frees to restore their three-point advantage, before McKane hit back with two placed balls of his own as the game now had a real tit-for-tat feel to it.

A couple of substitutions on both sides broke up the flow of the game as we entered a scrappy phase, as both teamed wrestled for control. A long range free from Ciaran McEvoy broke the deadlock but then a moment of magic from McKane brought Rathdowney within one again as he floated over a sideline from the right-hand side.

Rathdowney-Errill's experience began to come to the fore as they fought hard to grind out a result. First O’Connell pointed a 65 after McKane was unlucky to see his goal bound shot well saved, then came maybe the score of the game as John Keane tore up from his corner back position to put Rathdowney-Errill a point to the good.

They didn’t look back from here and scored three of the next four points to give themselves some daylight. A goal from Tadhg Dowling killed the game as a contest as his effort at a point dropped into the Portlaoise net to give Rathdowney-Errill a hard-fought win.