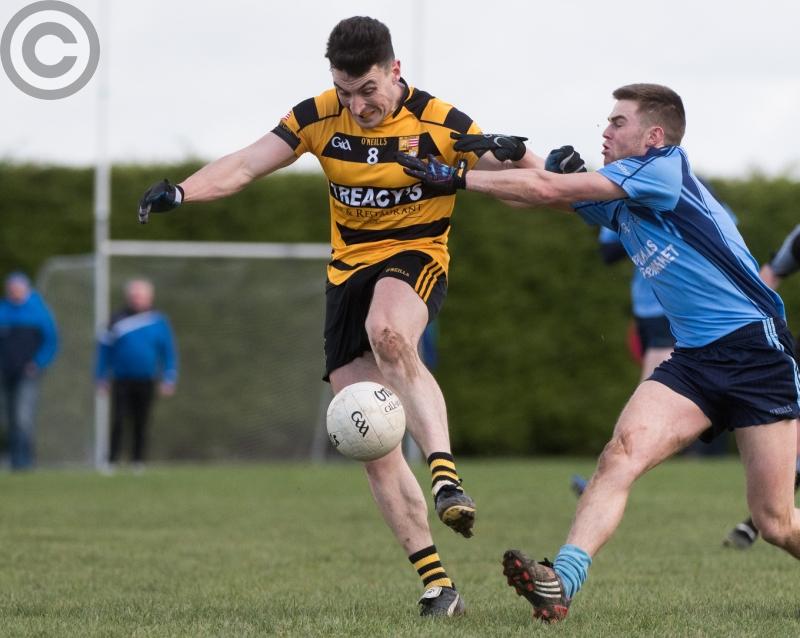 The Heath got their 2017 campaign off to good start with an emphatic eighteen-point dismantling of thirteen-man Ballyroan Abbey in The Heath on Sunday morning.

The home side and eventual winners got off to a dream start as with just a minute and a half on the clock, Chris Bergin finished off a superb passing move to raise the green flag for The Heath. Looking to stretch their early lead further, Evin Keane followed up with a well-taken point to put a four point margin between the sides.

Trailing by four points with just three minutes played, Ballyroan Abbey found their footing in the game as Adam Brennan opened their account with a good point from an acute angle, before an MJ Tierney brace and another point from Brennan levelled the game after thirteen minutes.

Chris Bergin and Ciaran Booth exchanged points with Eoghan Whelan and Tierney as the Ballyroan men briefly took the lead for the first time in the game as the first half entered injury time. However, their fortunes were to take a turn as they lost County star, Padraig McMahon, to a dubious straight red card in the thirty-second minute.

Ballyroan Abbey closed out the half with a close-range free from Tierney to level the proceedings, with credit also due to Ballyroan Abbey goalkeeper, Trevor Phelan, for a string of spectacular saves to leave the scoreline at 1-4 to 0-7 going in at the interval, as they now faced into a strong wind as well as being a man down for the duration of the closing half.

The second half proved to be much less of a contest as The Heath kept their opponents scoreless until injury-time of the second half. Keane reopened the scoring just thirty seconds into the half, with points from Bergin (2) and Ciaran Booth following, before Robbie Dowling lifted the Ballyroan net with a calm finish as they went seven points clear after forty-three minutes.

Things went from bad to worst for Ballyroan Abbey as they were reduced to thirteen men on the forty-five minute mark as MJ Tierney picked up a black card for dissent, while already being on a yellow card, to get his marching orders.

Shortly after, a third red card was brandished - this time to The Heath’s Alan Whelan for a second yellow offence as The Heath’s two man advantage quickly returned to one.

The Heath continued to rattle off scores in the final ten minutes with Keane notching a further 2-1, while substitute Eoin Delaney sprung from the bench to fire 1-1. Ballyroan Abbey ended their thirty-one minute drought in the first minute of injury-time through an Adam Brennan free, with the same man swinging over his fourth of the day a minute later as Ballyroan fell to a comprehensive defeat.