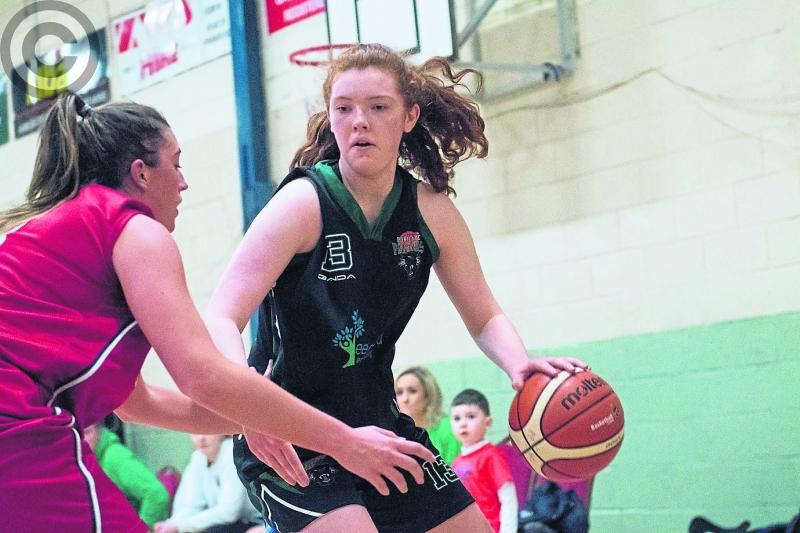 Coming off the back of a hard-earned win over Brunell last weekend, all roads led to Galway on Saturday as the girls faced a Mystics side who have been struggling to find form in their debut season in the Super League.

A win was imperative for the Panthers as other results in the league went their way, which now leaves them level on points with both Killester and Waterford Wildcats in fourth position going into the last game of the season, leaving them with the chance of gaining that coveted playoff spot.

The Panthers looked in control from the outset of the game as they attacked the Mystics man-to-man defence and scored at will from both inside an outside the arc as O'Sullivan, Sterling and Phelan notched up a three pointer each in what was a high scoring first quarter.

Claire Melia scored nine of her twenty one point tally in this opening quarter as she exerted her dominance down low unphased by Mystics' 6"2 American, Ebony Wells inside. Although they dominated on the offensive end, Portlaoise struggled defensively at points throughout this quarter as Galway penetrated at will off the dribble.

Hannah Coen converted two opportunities in a row, keeping her team within touching distance at the end of the first quarter as Portlaoise lead by eleven points.

Following a timeout for the home side, they upped their intensity on defence and scoring opportunities were at a premium for the Panthers. As momentum began to shift in the game, Claire Melia saved a shot clock violation with a suberbly executed one hand three pointer right on the buzzer and kept her team on top.

Wells grew into he game in this quarter as she caused all sorts of problems for the Panthers defensively and became the main focus of the Mystics offense, scoring and creating opportunities for her teammates.

However, the Panthers offense remained solid and two free throws from Sinead Melia ensured that they maintained the lead they had established in the first quarter and took in an 11 point lead at the half.

At the start of the third quarter Necole Sterling showed her quality as the finished off the jumper and under the board, equally as accurate, and was the catalyst in her team going on a seven point unanswered run.

A three pointer from Connaire and two scores from Blaney saw Mystics claw back the deficit as Portlaoise seemed to slack a little on the defensive end. The Panthers were in full control of their defensive boards through Sharon Melia and Sinead Nihill and this allowed them to run the break against a visibly tiring Mystics side.

Phelan and Sinead Melia both converted opportunities on the offensive end as they again held an eleven point lead going in to the last quarter.

The scoring differential always seemed more throughout this game as Portlaoise were on top and seemed in totally control, but much to Mystics credit they came out all guns blazing in the last quarter and implemented some full court pressure.

Claire Melia, Phelan and O'Sullvan managed this pressure well, passing their way out of trouble and setting up the offense once over the half way line. With Wells in foul trouble for Mystics midway through the final quarter, Melia became the target player down low as they struggled with her height inside, and she accounted for six points in a row for the visitors before she found herself on five fouls with two minutes on the clock.

Sinead Nihill and Sharon Melia both finished well under the board and kept their teams tally ticking over, which was hugely important as Mystics were throwing everything at the Panthers. Alison Blaney netted the final basket of the game for the home side, but the Panthers ran out nine point victors.