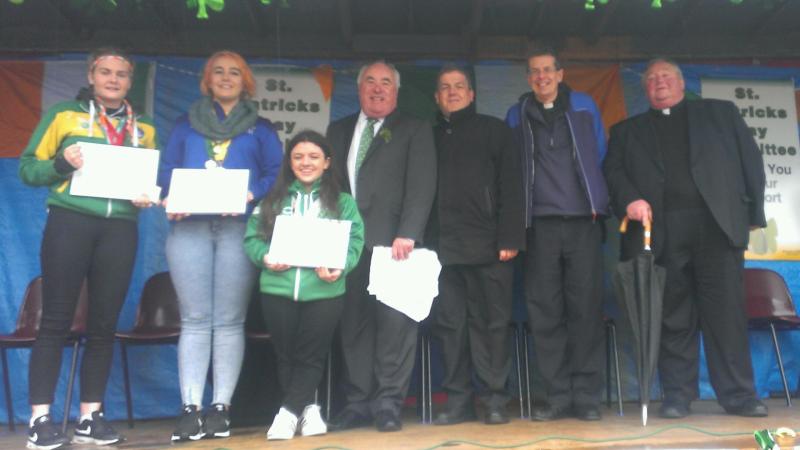 Three of Portarlington's finest sports women were given Guest of Honour status at this year's St Patrick's Day parade in the Laois Offaly town.

Star swimmer Nicole Turner, champion boxer Kayleigh Woods and high achieving athlete Seodhna Hoey led the parade through the town before they were welcomed to the viewing stand by MC Willie Murphy.

Last week she competed in the inaugural Para Swimming World Series in Copenhagen. While she didn't medal, her time in the 400 medley final was faster than Rio.

Seodhna Hoey is fast emerging as one of Ireland's brightest athletic hopes. She already has 16 county titles and won 54 Leinster medals of which 25 are titles. She has 26 national titles and won Leinster and National schools titles.

In 2014 she represented Leinster in the Tailteann Interprovincial Games in which she won silver in both hammer and discuss and a place on the Irish team representing her school and Ireland.

She has received two national juvenile sports star awards from Athletics Ireland and a Leinster juvenile star award. She was selected as best athlete in Laois in 2016.

Seodhna is now in her 1st year at Dublin City University studying post primary education. She trains and competes for DCU Athletics team and has already won gold for the university in the Indoor University Championships.

Kayleigh Woods has enjoyed some fantastic boxing achievements already in her career.

Presentations were made to the three young women at the culmination of the parade.