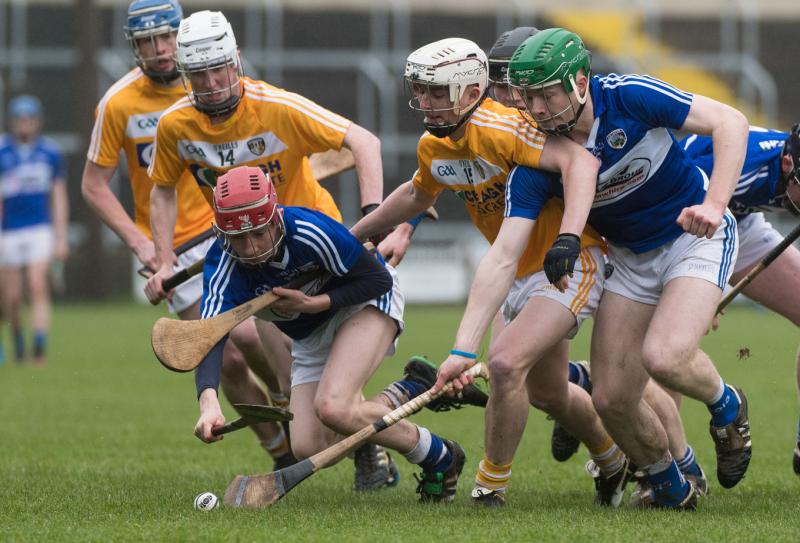 Laois minors suffered a fourteen point defeat at the hands of Antrim in O’Moore Park on Saturday afternoon, in a game where goals were key to Antrim’s victory.

A game which was down to take place in the Laois Training Centre was moved half an hour before throw-in to O’Moore Park due to the pitches in the Training Centre being deemed as unplayable.

Laois took full advantage of the wide playing field and after two minutes of play added their first score of the game from the stick of Ciaran Comerford, after a poor puck out from Antrim keeper Ruairi Sharpe.

Antrim responded quickly and added four points without reply, three of these points coming from open play. It took Laois ten minutes to get their second score of the game which came from a free from Ciaran Comerford. The same player added a point from play and a free to leave it 0-4 each after 16 minutes.

Laois responded however with a lovely point from James Keyes right on the sideline. Antrim went in a goal up at half time 1-5 to 0-5.

The second half didn’t get any brigher for Laois as Antrim’s full forward added a point directly after the throw in. Both sides traded points and after some good play,Cathal Duggan added another point for Laois which left only a goal separating the two sides.

Antrim responded almost immediately as their half forward David Kilgore added 1-1 to his name in the space of five minutes. Laois forwards were struggling to break down the Antrim defence and were not as clinical as Antrim in front of the goal.

Antrim finished much stronger than Laois in the last 10 minutes as corner forward Ed McQuillan added another goal and any sight of a comeback for Laois seemed to vanish. Laois did add a point from play but Antrim added two of their own along with another goal from Ed McQuillan to leave the full time score 4-10 to 0-8.