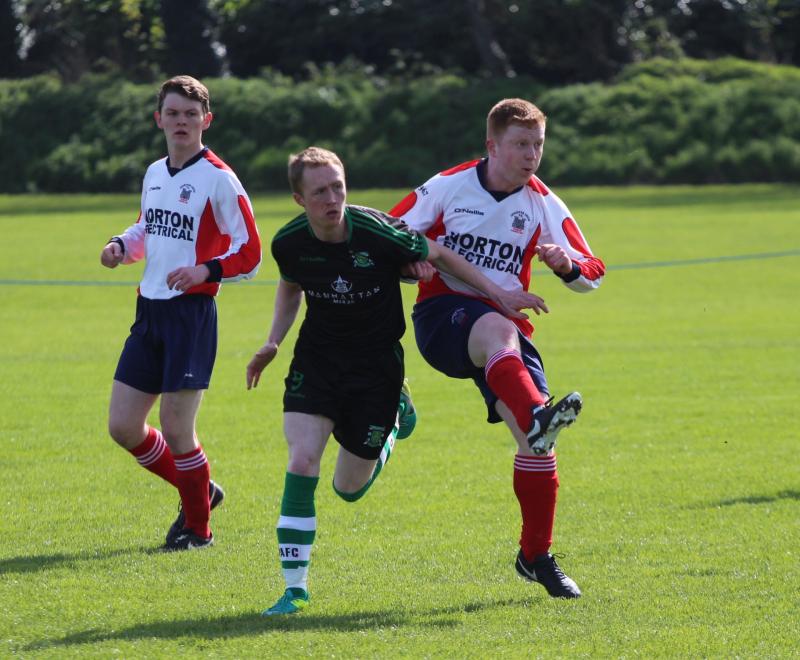 Jason Murphy in action for Portlaoise on Sunday morning.

Portlaoise AFC first team missed the chance to go top of Leinster Senior League Senior 1B following an average performance away to Leicester Celtic on Sunday afternoon as they dropped two points on the hunt for promotion.

Leicester Celtic had the first chance of the game when a good cross from Sean Keller found the head of Phillip Halligan, but he somehow missed the target from four yards. Portlaoise settled into the game however, and created a number of opportunities, but good defending kept them at bay.

Portlaoise should have received a penalty as Dillon got behind the defence and was taken down by Miley but the referee, to the astonishment of everyone, somehow awarded a free kick to Leicester.

On 28 minutes Leicester punished Portlaoise for not taking their chances and some sloppy play, as Halligan made no mistake from six yards. Leicester took control for the next five minutes and the visitors had to be thankful to Mateusz Cwienk for two stunning saves, and his heroics kept Portlaoise in the game.

The equaliser arrived on the 30th minute when a great move opened up the home side and Jody Dillon volleyed home from 15 yards.

The second half was all Portlaoise as the home side sat in and defended, but despite numerous close efforts the closest they came to getting a winner was when Jason Murphy’s shot was brilliantly pushed onto the post by Lew.

Oisin Fitzpatrick was sure he had got the winner from a James Mullaney cross but as the Portlaoise players celebrated the referee ruled the goal out for an offside decision that baffled everyone.