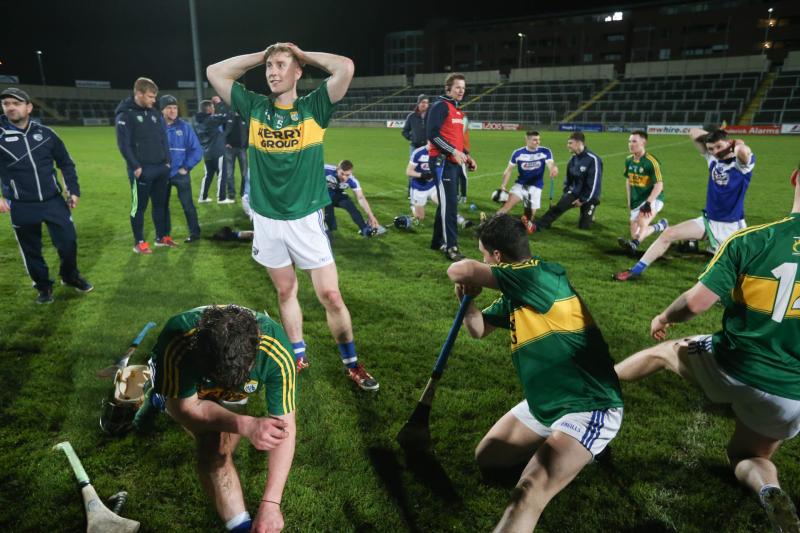 Not since I was forced into an early GAA retirement can I recall a game which has taken such a physical toll on my body.

Life in the press box is undoubtedly a sedentary one, but Saturday night was different. As a remarkable game unfolded over the course of 100 or so minutes, my stomach leapt, my heart pounded, nails were gnawed and already dodgy knees were rendered even weaker.

Quite how anyone managed to play in the game is a mystery to me, when watching it took so much out of me. Huge credit must go to both Laois and Kerry for the resilience, passion and skill shown on the night.

Laois v Kerry will never be a glamour game to the hurling fraternity, but recent history between them shows they are always intriguing, for a variety of reasons. Ourselves and the Kingdom might not have the same lustre as Tipp v Kilkenny, Cork v Waterford or Limerick v Clare, but all things being relative, you'll struggle to get better value for money.

The third meeting between them, later this year in the round robin, promises to be another humdinger.

Throughout Saturday's drama, it was truly impressive to see Ross King get better and better as they game went on. It is a point we made after last year's drawn Laois SHC final, but the Rathdowney-Errill man has repeatedly shown that he can be relied upon for the big occasion.

So far in his career he has played in five county finals, including replays. In those games, he has scored 1-51, or near enough an average of 11 points per game. In the last two weeks, Laois hurlers faced into two games to save their NHL Division 1B status, against Wexford and Kerry. In Wexford Park, he hit 0-10, and then on Saturday night he added 0-13, with six of them coming from play.

In two of those county finals, the drawn games against Clough-Ballacolla (2012) and Borris-Kilcotton (2016), he hit the equalising point with the last puck of the game. On Saturday, after Laois squandered a three point lead in a manner which could have broken them, he responded with four points in the first half of extra time to lift them again.

It was a captain's performance in every way, and he was eventually forced off the field, his legs seizing up after a herculean effort.

You have to hand it to any player who can dig that bit deeper when it is needed the most, and in his relatively short hurling career thus far, King has shown an admirable talent for doing just that.

His ability has been a no secret to anyone in Laois over the last five or six years, but it is only now that he appears to have cemented a starting place with the county senior team. Injuries certainly haven't helped, but the captaincy this year has been a major show of confidence in him by Eamonn Kelly.

Another aspect which shouldn't be overlooked is that he has been given the free-taking responsibilities. This might not seem like a big factor as to how a player performs in open play, but for those who take them regularly at club level, doing so on the county team allows them to get into a rhythm of play which suits them.

Nailing a couple of early frees can give them confidence, and that can then be transmitted into open play. With Picky Maher coming back to full fitness it remains to be seen if King will remain as free-taker for the rest of the year, but he has done little wrong since being entrusted with them.

Of course, King wasn't the only Laois player to impress on Saturday. Leigh Bergin keeps growing into the full-back position, and while not the finished article yet, his performances have been hugely impressive this year. Cahir Healy went into kamikaze mode in the second half, flinging himself in front of Kerry attackers time and time again, even blocking a shot on the line for good measure.

Willie Dunphy, thankfully free of injury, gets better with each game, and the Cha Dwyer experiment also paid dividends. He's by no means a man-marker, but his distribution into the forward line, and willingness to throw his weight around at centre-back, certainly made a difference.

With players to come back into the fold, Laois will hopefully improve from here. The league campaign was far from perfect, but there was enough on show to keep appetites sufficiently whetted for the year ahead.