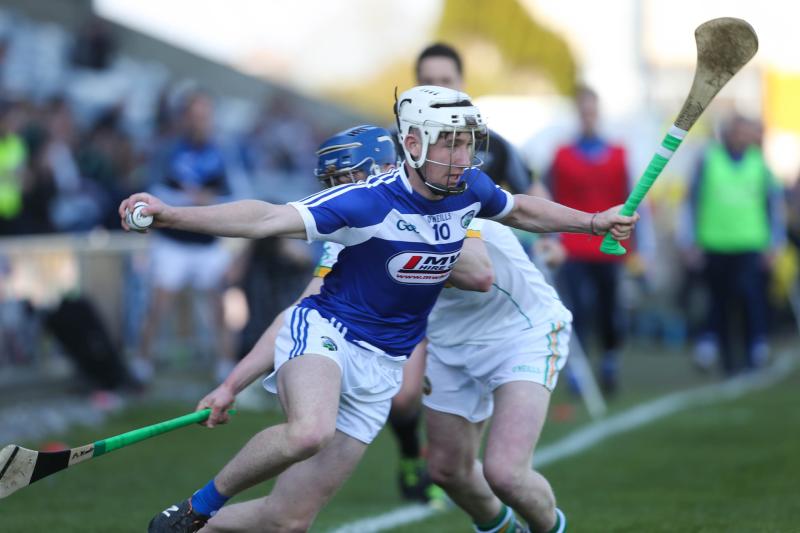 Ciaran Comerford in control for Laois against Offaly in the Leinster MHC at O'Moore Park. Picture: Alf Harvey/HRPhoto.ie

The Laois minors hurlers secured a 14 point win against neighbours Offaly on Saturday afternoon in O’Moore Park, on a day where conditions were perfect for hurling.

Offaly were quickest out of the blocks and after seven minutes of play had a 0-4 to 0-1 point lead thanks to scores from Lochlann Kavanagh, Shane O’Toole and Aaron Maher. Laois rallied back through scores from James Keyes and Ciaran Comerford to leave the sides level after 13 minutes of play.

However, a superb point from Ciaran Comerford from the sideline, coupled with an Oisin Bennett free, put Laois out in front for the first time in the game. The gap grew after 18 minutes when Bennett found Joe Phelan on his own in front of the goal to finish past Offaly goalie Ciaran Flynn.

Ciaran Comerford added another to his tally when he took an excellent pass from club mate Padraig Delaney. A few minutes later Bennett added another free and Ciaran’s twin brother Daniel put over another point for the Laois team to leave the score 1-9 to 0-5 after 21 minutes.

Offaly did respond and a Conor Langton point and two frees from David Nally meant that four points separated the sides. A 65 from Padraig Delaney was the last score Laois were to get of the first half, and it meant that Laois went in leading at the break 1-10 to 0-9.

The second half started much the same for Laois as they continued to win the breaks and dominate the game. Captain Podge Delaney added a long range free to his tally and a minute later Oisin Bennett knocked the ball out of the Offaly’s defenders hand to kick in a second Laois goal. This left Offaly with a big gap to bridge as Laois took an eight point lead.

Laois will now face Dublin next Saturday in Round 2 of the Leinster Championship. Kilkenny face Wexford in the other round two clash.