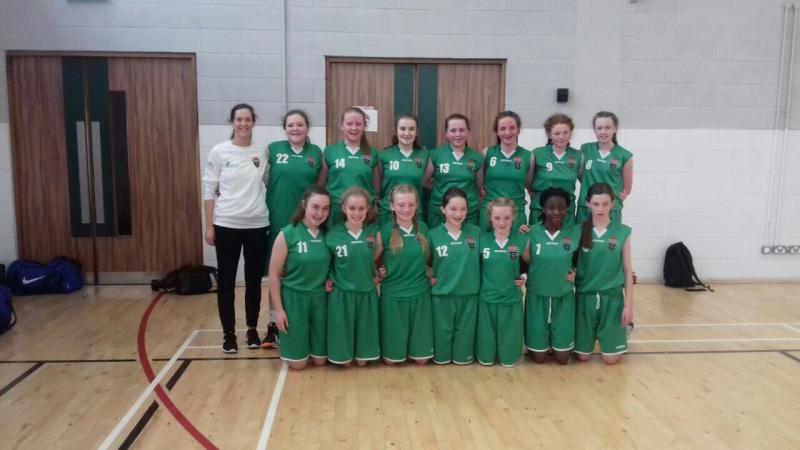 The Portlaoise Panthers U-14 girls team with coach Grainne Tomlinson.

Last weekend saw the U-14 girls partake in the All-Ireland Club Championship, hosted by the North Munster Area Board.

Having come runner up in the Midland League, Portlaoise represented the Midlands in the competitive Division 2 competition in the UL Arena.

The girls had the tough task of playing three games in quick succession, so they knew they would have to dig deep in order to top their pool and keep themselves in contention for top honours.

First up for the girls was a fast paced game against Kerry representatives Gneevaguilla. This athletic side was up for the challenge but Portlaoise dominated the first quarter with scores from Neassa Towey and Sinead Brady, while Siobhan McEvoy made numerous defensive stops to give Portlaoise the lead the lead 7-5 at the end of the first quarter.

The second quarter saw Portlaoise hit the ground running and the lead began to stretch through Grainne O'Reilly who led the charge for her side clocking up some great scores from the outside drive. Ella Byrne found her range and popped in some great shots to give Portlaoise a comfortable lead at half time.

Score difference is always a factor in pool games so Portlaoise pushed on for the second half of the game, with all girls playing a part. Portlaoise showed their skill on the ball and a brilliant combination move to the basket in the third quarter by Jessie Preston and Eleanor Healy saw Healy get to the basket and finish with confidence to give Portlaoise a commanding lead heading into the last quarter.

The last quarter saw the youngest player on the team, Jill Johnston, showing everyone how it's done with two brilliant shots in quick succession to hand her side their first victory of the weekend on a score line of 18-39.

The second pool game saw Portlaoise take on competition debutantes Sligo All Stars. All Stars had a tough two point defeat to Belfast Phoenix in their opening game and needed a win in order to keep their title hopes alive.

Portlaoise started the game strong with Neassa Towey leading the game from the point. Sinead Brady showed she was no pushover, battling for every dirty ball for her side while Munirat Shabowale's pace was too much for the Sligo girls, and Portlaoise took a lead into the second quarter that they never relinquished.

The second quarter saw Portlaoise introduce fresh legs in the form of Rachel Glynn, Sinead Murphy and Grainne O'Reilly. This trio of players were too much for the Sligo side as they weaved in and out of the Sligo defence with all of them on the scoresheet within the first two minutes.

Aoibhe Mulhall found her form at the basket and made no mistake pushing Portlaoise 15 points ahead at the half time whistle.
Caoimhe Sweeney took charge of the ball at the start of the second half giving a self assured display for one of the younger members of the team. She led her team from the point spraying the ball left and right giving the girls numerous opportunities and scores at the board. The last quarter continued in the same vein.

Niamh McKittrick entered the fray and took up where her team mates left off. A steal at the top of the key saw her use her pace down the floor to finish with a great score. Sligo dropped their heads and Portlaoise put them to the sword on a scoreline of 21-55.

Portlaoise Panthers took to the floor for their third pool game against Belfast Phoenix, knowing that they could afford to lose by eighteen points and still qualify for the semi final. But losing was not in the mindset of the girls, who continued their unbeaten pool run to qualify and set up a mouth watering semi-final against Waterford Wildcats.

The last pool game started at a very slow pace which could be expected as the girls were tiring. Portlaoise were unfortunate to be placed in the only group with four teams meaning an extra qualifying game, but this group of fourteen girls didn't let that get to them.

Neassa Towey controlled the game from the start, making some fantastic passes into Siobhan McEvoy who finished well under the basket. Phoenix also got a great start and notched up a few nice scores, but Portlaoise came back strong at the end of the quarter to take a narrow lead into the second quarter.

Portlaoise Panthers came out all guns blazing in the second and frustrated Phoenix from the off. Grainne O'Reilly continued to score at will and found it easy to pick off assists with Rachel Glynn and Aoibhe Mulhall getting on the scoresheet.

Phoenix were also finding it hard to get baskets as the Portlaoise girls upped their intensity levels on the defensive end. A healthy lead at half time was just rewards for their efforts and also put the game, and topping the pool, beyond doubt.

The girls were not about to sit back in the game and continued to play hard both ends of the floor with Caoimhe Sweeney and Munirat Shabowale fighting for every ball and getting out on the break. They worked the ball around on offence and picked off some fine scores with Ella Byrne and Sinead Brady putting the finishes touches to the plays.

The final quarter was a formality for Portlaoise as they rotated their players in and out to try keep things fresh. The girls were in control at both ends of the floor and playing like a team well beyond their years. With the semi final in their sights the girls slowed the game down in offence but continued to pick off some wonderful scores. Portlaoise won out on a score line of 39-18. 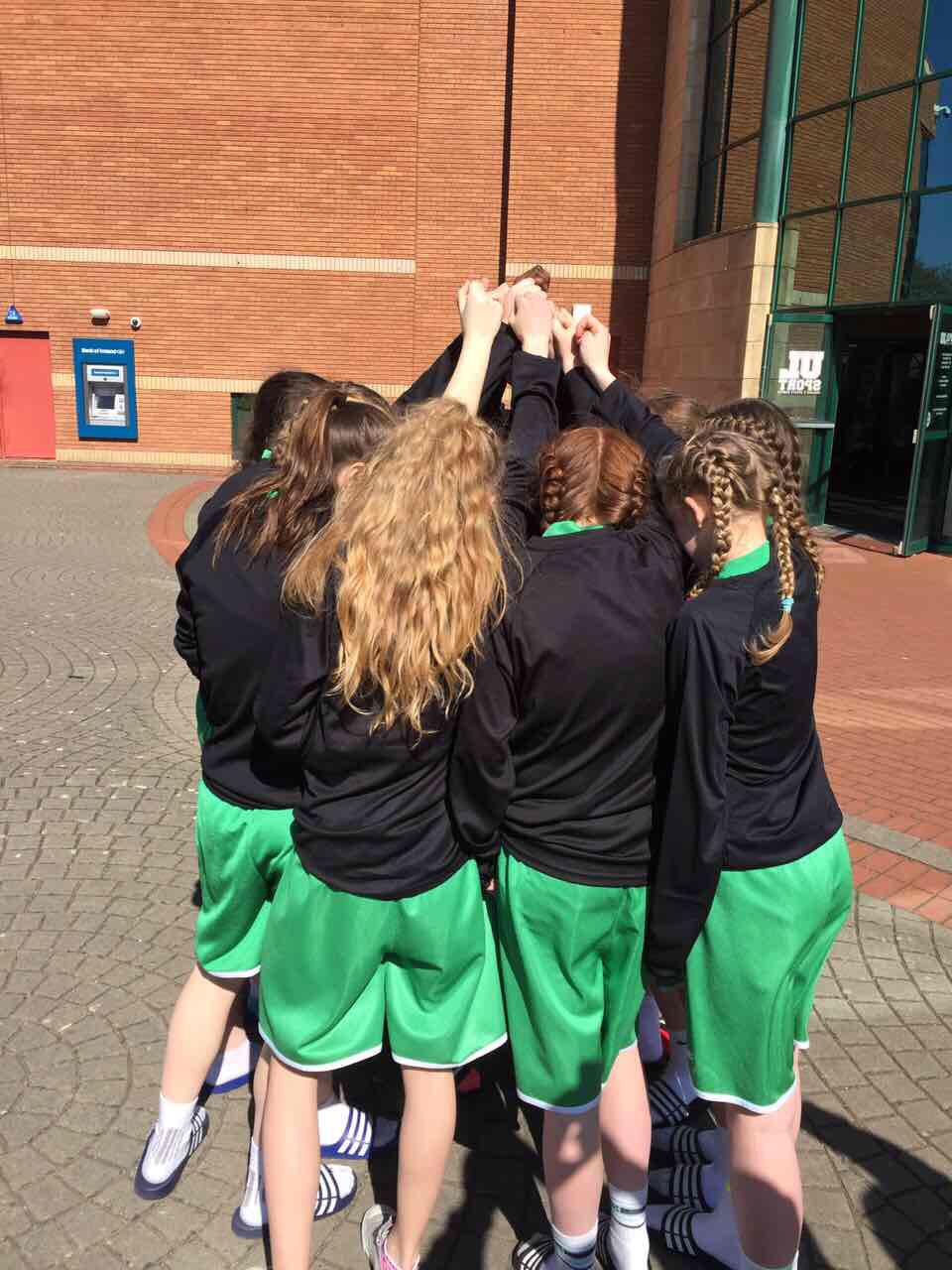 With Portlaoise topping their table the scene was set for a semi final clash against Kilkenny League rivals, Waterford Wildcats.

The girls had met before Christmas with Wildcats clinching the victory after a hard fought game. Waterford had two tough games in their pool while Portlaoise played three but the rest period was significantly different, with Waterford receiving a five hour break compared to Portlaoise having just one.

The game was a battle from the tip off. Unlike the previous three games, Portlaoise had to fight for every possession, every rebound and every score.

Siobhan McEvoy had her hands full with inside star forward Hayes. McEvoy was up for the challenge and kept her rival at bay numerous times but Wildcats lead 5-9 after the first quarter. The battle continued in the second quarter.

Grainne O'Reilly rose to the occasion making every possession count. O'Reilly used her speed and agility to weave in through the Wildcats defence clocking up 17 points for her team and giving her side a three point lead at half time.

The third quarter saw the girls maintain their lead, pushing it out to nine points at one stage before Waterford clawed it back to five points at the end of the third quarter. The last quarter was a fraught and well fought encounter by both sides.

Wildcats upped their intensity and their fresher legs were the difference in this quarter. Portlaoise poured everything they had into the final four, minutes but came up against a resolute Wildcats defence who saw out the game with a six point victory.

Portlaoise Panthers took on Drogheda Sparks in the 3rd and 4th place play-off game on Sunday morning, with the girls looking to finish off a fantastic weekend of basketball with a win.

They were coming up against an unknown force in Sparks, but they ground out the win to finish third in the AICC competition with their only loss coming against eventual winners Waterford Wildcats.

Portlaoise got off to a shaky start with Drogheda Sparks setting down an early marker. Sparks were by far the bigger team, but Portlaoise were not going to let that deter them.

Sparks led throughout the opening quarter but scores from Siobhan McEvoy and Neassa Towey kept the margin to four points at the end of the quarter with the score line reading 9-5.

Portlaoise had to make inroads into the Sparks lead in the second quarter to keep the game as close as possible. A basket by Grainne O'Reilly and Ella Byrne brought the game back on level terms, before Sparks broke down the floor and left Panthers trailing again. Niamh McKittrick held her own on the floor and was unlucky not to nick a score or two.

Sparks seemed to be getting the upper hand on the Portlaoise defence as they got to the board on numerous occasions. Sparks still held a two point lead at the half time buzzer on a score line of 19-17.

The third quarter started with Portlaoise still struggling to find their rhythm at this stage of the game. A time out early in the third quarter settled the girls and they ran through their plays with scores coming off their next two offences with Ella Byrne converting.

This lit a fire under Portlaoise and they rattled off further scores as they looked to put the game beyond Sparks.

The fourth quarter saw captain Grainne O'Reilly make two crucial scores which gave her side the confidence they needed to close out the game. Sparks weren't lying down and they threw everything they had at Portlaoise, but the Portlaoise defence stood up strong with Siobhan McEvoy and Aoibhe Mulhall owning the boards.

Sinead Brady scored a basket which was a final nail in the coffin as Portlaoise saw out the game to take third place in the AICC competition.

A big well done to all the girls and coach Grainne Tomlinson on their achievement. The girls now look forward to the Top 4 semi final when they match up against a very strong Longford Falcons outfit next Friday in Portlaoise.