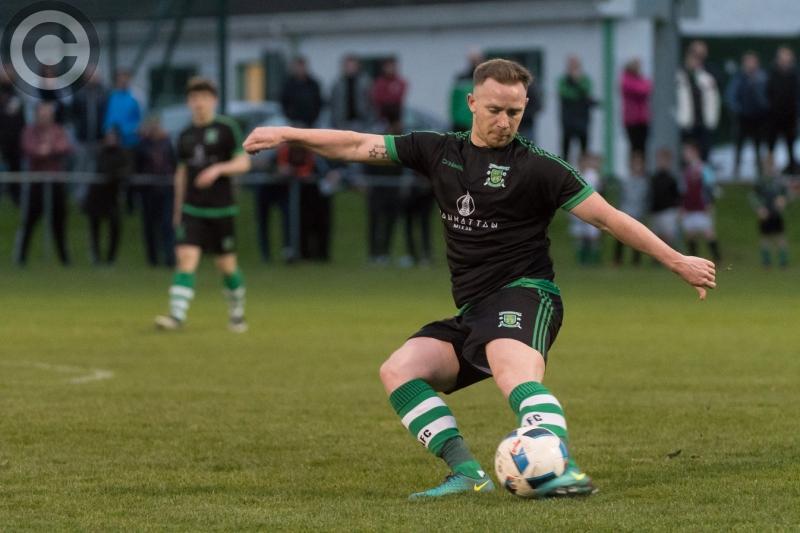 Portlaoise AFC first team secured a valuable three points in their promotion push with a brilliant 4-1 win away to old rivals and fourth placed Greenhills/Greenpark FC on a blustery Sunday morning.

The sides met in January where Portlaoise stunned the then league leaders 6-1, and since then Portlaoise have pushed on, but Greenhills form has been inconsistent.

Portlaoise knew that they would have to be at their best to win against a team that have won at home for the last seven seasons when the two teams have met, and on Sunday morning were dealt a massive blow when top scorer Jason Murphy was ruled out with illness.

However, Robbie Ging made his first full start for the team this season and was excellent throughout the first half as his skill and energy gave the home defenders lots of issues.

The visitors went in front after just six minutes when Jody Dillon was fouled outside the penalty area and Paul Cahillane stepped up to send a stunning free kick to the top corner of the Greenhills net.

Portlaoise almost doubled their lead when a superb pass from Cahillane found the overlapping James Mullaney and his first time cross was met with a brilliant header by Dillon, but Paul Lyons denied him with an outstanding save.

However, Portlaoise went 2-0 up on 14 minutes when Cahillane exquisitely picked out Aaron Rafter’s run and he brilliantly volleyed home first time past Lyons. Cahillane was causing the home defenders all sorts of problems and yet another free kick put Portlaoise 3-0 up after just 25 minutes, this time his ring wing delivery went all the way to the net with Robbie Ging’s run deceiving Lyons.

Portlaoise had two good chances to go further ahead before the break but were denied by Lyons on both occasions, while at the other end Emmanuel Okpara was again outstanding at the heart of the midfield. Colm Poole went close with an effort from distance but the score remained 3-0 at the break.

Greenhills started the second half well and should have pulled a goal back but Stephen Cummins missed the target from close range, then on 57 minutes were awarded a penalty for handball in the area and Darren Goode scored.

Portlaoise defended superbly for the next 15 minutes with Mark Brennan, James Mullaney and captain Eoghan White giving the visitors very few opportunities, and when they were breached Mateusz Cwienk made a stunning save to deny Christy Aires.

Cahillane went on a great run but his strike was saved by Lyons, and substitute Derek Beale’s follow up effort was somehow cleared off the line before Aaron Rafter got his second of the game after Cahillane’s shot came back off the post.

Portlaoise now lead the division, one point ahead of St James’ Gate and three ahead of Inchicore Athletic but both sides have a game in hand and meet next weekend, while Portlaoise are idle.