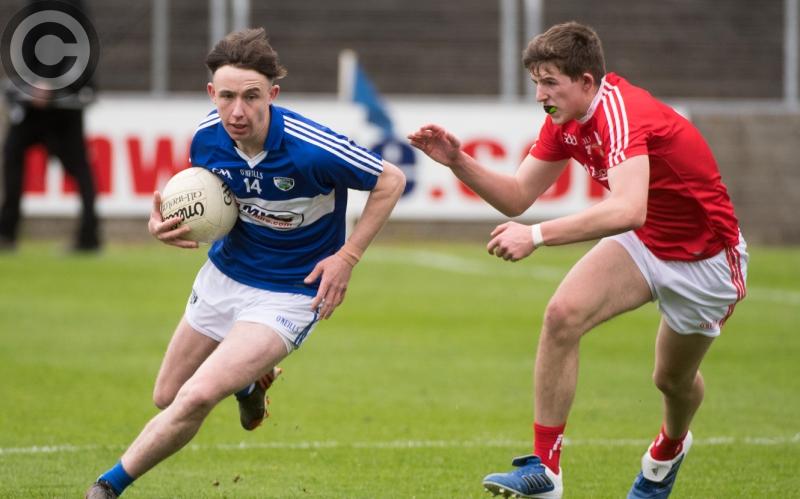 Ciaran Comerford on the attack for Laois. Pic: Denis Byrne.

The Laois minor footballers opened their 2017 Championship campaign with an agonising, but brave two point defeat to Louth after extra-time in O’Moore Park on Saturday evening.

A missed penalty, fifteen wides and a host of somewhat dubious officiating-decisions - particularly two controversial points awarded to the visitors, Damien McCaul’s 'wide' with essentially the last kick of the game in ordinary time, and Diarmuid Whelan’s obvious haul-down in the box with two minutes to go in extra-time as two points separated the sides - all hindered Noel Delaney’s side in their opening Championship fixture.

Laois made a positive start to the game with an Alan Kinsella free nudging them in front with less than thirty-seconds played, before wing-back, Colin Slevin, doubled their advantage with the aid of the post.

Louth hit-back with a free of their own from the impressive John Gallagher to bring them back to within one, but Laois quickly restored their two point advantage with Diarmuid Whelan’s first of the day with ten minutes played.

The first of Louth’s questionable points arrived after seventeen minutes with blood-sub, Jack Murphy’s point controversially awarded, inspiring Diarmuid Whelan to respond with a superb run before launching a booming effort from thirty-five yards to keep the gap at two.

Louth hit for their first goal of the day when Ben Mooney blasted the ball past Tom McCann in the Laois goals with twenty-four minutes played, but Laois scored the first of three successive points twenty-seconds after the goal through Jack Owens, Whelan and Ronan Coffey to leave them two points ahead with two minutes remaining in the half.

Louth would have the last say in the half as Gerry Garland pointed to bring the deficit to the minimum as Laois went in one-point ahead on a scoreline of 0-7 to 1-3 at the break.

A quick brace of frees from Gallagher just after the restart edged Louth into the lead, but an Alan Kinsella free briefly levelled the sides before corner-back, Alan Connor, had the visitors back in front shortly after.

Whelan landed a brace, one free and one from play, with a Gallagher point sandwiched in-between as the sides remained deadlocked with a quarter of an hour left to play.

Laois lost centre-forward Niall Dunne to a black card after forty-nine minutes, with Alan Kinsella seeing his penalty saved two minutes later as the result looked to be slipping away from the Laois men.

Laois took the lead a minute later through a Mark Barry free, but a forty-five from Gallagher four minutes from time levelled the game to ensure a nervous finish.

Laois weren’t without chances in the final minutes as some opportunities went astray, but it was Louth who edged in front right on the stroke of full-time with Gerry Garland providing the point as Laois looked to be in trouble.

Alan Kinsella provided an all-important equaliser in the first minute of injury-time that looked to have sent the game to extra-time, before a late, late Damien McCaul effort was controversially judged to have gone wide as the teams now prepared for extra-time.

Alan Kinsella put Laois into the lead two minutes into the first half of extra-time as he saw his shot from point-blank range blaze over the crossbar for a point, before doubling the lead four minutes later with a point from his right boot.

Louth flourished in the final minutes of the half with Ciaran Keenan converting a free, before Gallagher levelled the sides with a dubious point that was initially waved wide before the referee overruled his umpires.

There was still enough time in the half for Gallagher to rattle the Laois net from the penalty spot as Louth led at the interval by 2-11 to 0-14.

Laois narrowed the gap to two points with a free from Whelan five minutes into the closing half of extra-time, before they were denied a blatant penalty with two minutes remaining when Whelan again caught a high ball into the square before being hauled down - only for a free out to be awarded to Louth.

Laois continued to search for that crucial goal but to no avail as Louth progress in the Championship, while Laois will now prepare for a run in the qualifiers.