Portarlington RFC coach gets Leinster 'Volunteer of the Year' Award 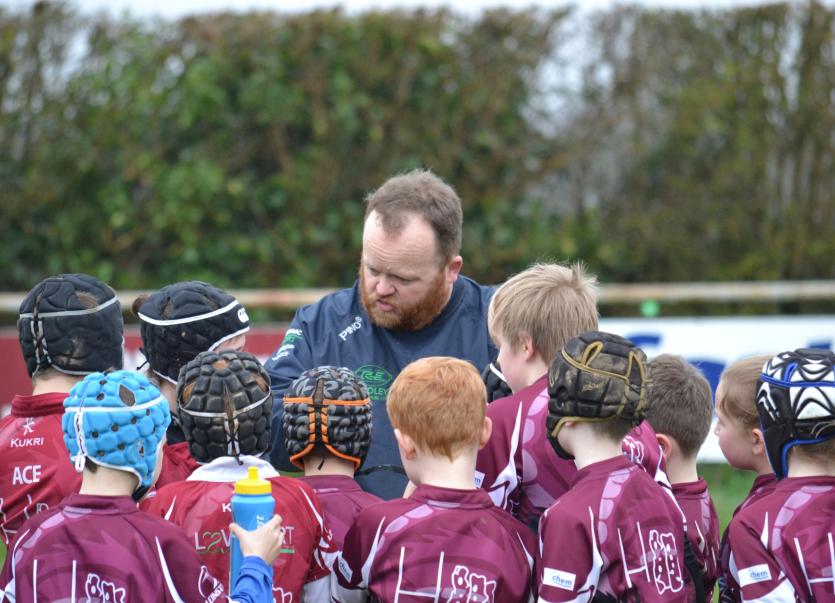 Clive Doody fire’s up the troops during a recent minis blitz.

Last year Leinster Rugby introduced a new initiative that recognises the exceptional commitment shown to club rugby by volunteers all over the province, and this month saw Portarlington RFC’s Clive Doody honoured as he was selected as the 2017 Volunteer of the Year.

Clive, who was also presented with the Portarlington Gun Club Member of the Year award this year, became involved in rugby when his son Callum began playing with the club’s minis. It wasn’t too long before he was helping out with coaching and attending coach development courses run by Leinster Rugby.

The enthusiasm that Clive, along with fellow coaches Sylvia McGuinness and Cormac Powell, brings to the role has led to an increase in the numbers of boys and girls playing with the U-9s squad as fun, inclusion and development are prioritised during every training session and blitz day.

However, Clive’s commitment to the club doesn’t end with coaching. He has also become one of the club’s most enthusiastic supporters on the side line as he attends as many youths and senior matches as possible every weekend. When asked about this Clive said “The respect that all players in this club show for the Port jersey is incredible. Regardless of whether they are winning or losing our boys, girls and senior players keep playing with incredible spirit until the final whistle.

“Rugby is the ultimate team sport and it makes addictive watching, so myself and Callum will always stay around to watch youths games after minis training or jump in the car to get to an away match. As a coach I find it really beneficial to see what the more experienced guys are doing with their teams and they are always great at giving advice about developing the skills of the kids that I am working with.

“I have to thank my wife Nicola for putting up with it though. She knows how much myself and Callum enjoy it and she never complains. It’s a real honour to be given this award but I feel a little bit embarrassed because there are so many other people in the club doing amazing work every week. Its great to be able to be a part of it all”.

Portarlington’s President Jim Coman says that this award is well deserved, and that Clive’s dedication doesn’t go unnoticed at the club. “If we need someone to volunteer for car park stewarding then Clive is there, whenever there is a coaching course his is the first name on the list and I’m starting to think that he’s cloned himself judging from the number of games that he gets to every weekend!

“Clive is also a huge help with club fundraisers and he raised a significant amount of money to kit his minis team out with club gear last season.”

To thank him for his commitment Leinster Rugby presented Clive with two VIP tickets for the recent Champions Cup game against Wasps but it was no surprise to anyone that he ended up giving them to a friend as he was already committed to bringing his U-9s to the game on a club trip to the Aviva!