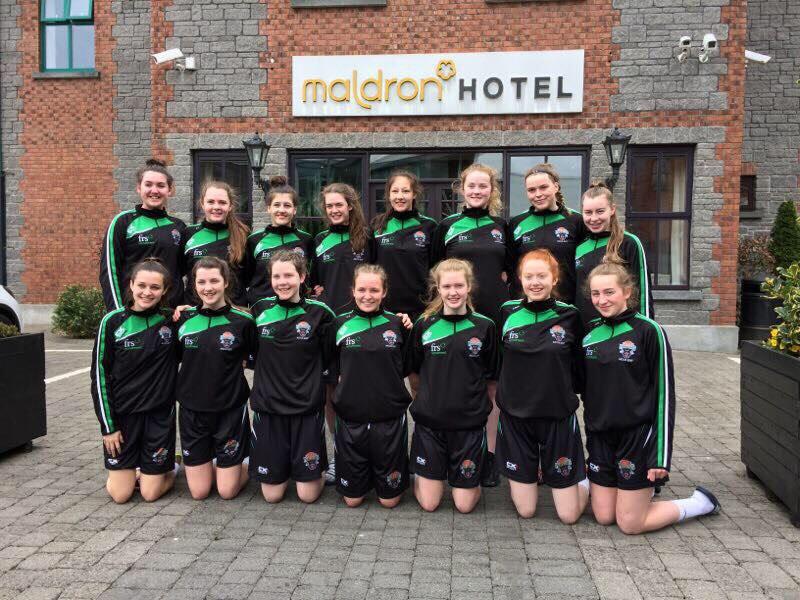 The Portlaoise Panthers U-16 team at the AICC finals.

The U-16 girls travelled to Galway last weekend to compete in the AICC. The girls were facing a tough Cork side in their first game in Brunell; a well-established and well known club who had a very convincing win in their first game.

The girls took the floor looking great in their new gear kindly sponsored by FRS Recruitment. Things didn’t go according to plan in the first half, the nerves got the better of the girls who found it very hard to get going and found themselves trailing by nine points very early in the game.

The girls were making some very uncharacteristic mistakes and Brunell were capitalising on these. The girls found themselves trailing by 12 at half time.

Tactical changes and a good team talk at half time saw a different team take to the floor for the second half. The girls showed massive determination and grit and saw Cork sides lead cut to six points within the first two minutes.

They continued to push on and now had the momentum and before the end of the third had narrowly taken the lead. The girls were so determined now not to let this lead slip their defence was superb and they were now forcing their opponents to make errors.

Panthers had too much in the end and held out to take a hard fought seven point win.

After a tough win in first group game the girls now faced Galway Titans in a must win game to keep themselves in contention for a semi-final spot. Again the girls were slow to get going and they allowed Titans to dictate the pace of the game early on.

However they found their momentum and took a six point lead at the end of the first. The Galway side who had nothing to lose after suffering defeat in their first game started to force our girls to make mistakes and fumble some plays resulting in Titans brining the game level at half time.

With a semi-final spot to fight for the girls again had to dig deep and showed us what they are capable of. They created good scoring opportunities and were just too strong in the end. They had now secured a semi-final spot and a top 4 finish.

After two good wins on Saturday, Portlaoise faced their toughest test on Sunday squaring up against favourites and on form side Liffey Celtics in the U16 A semi-final in The Jes, Galway.

The first quarter was a very tight affair with both sides taking time to get into the game. Portlaoise opened the scoring through Ciara Byrne with a well worked score. Liffey Celtics replied with three inside scores to lead 6-2 before Shauna Dooley left them trailing by a single basket with three minutes to play.

Hannah Collins and Jasmine Burke showed their strength in defence, denying Liffeys’s inside players numerous opportunities. A drive by Amy Byrne resulted in two shots which saw her make one, leaving Portlaoise just trailing by one point after the first quarter.

The second quarter saw Liffey Celtics assert their dominance in the game with quick passing and stong finishing at the basket. Portlaoise were struggling to contain their bigs who were clinical at the basket. 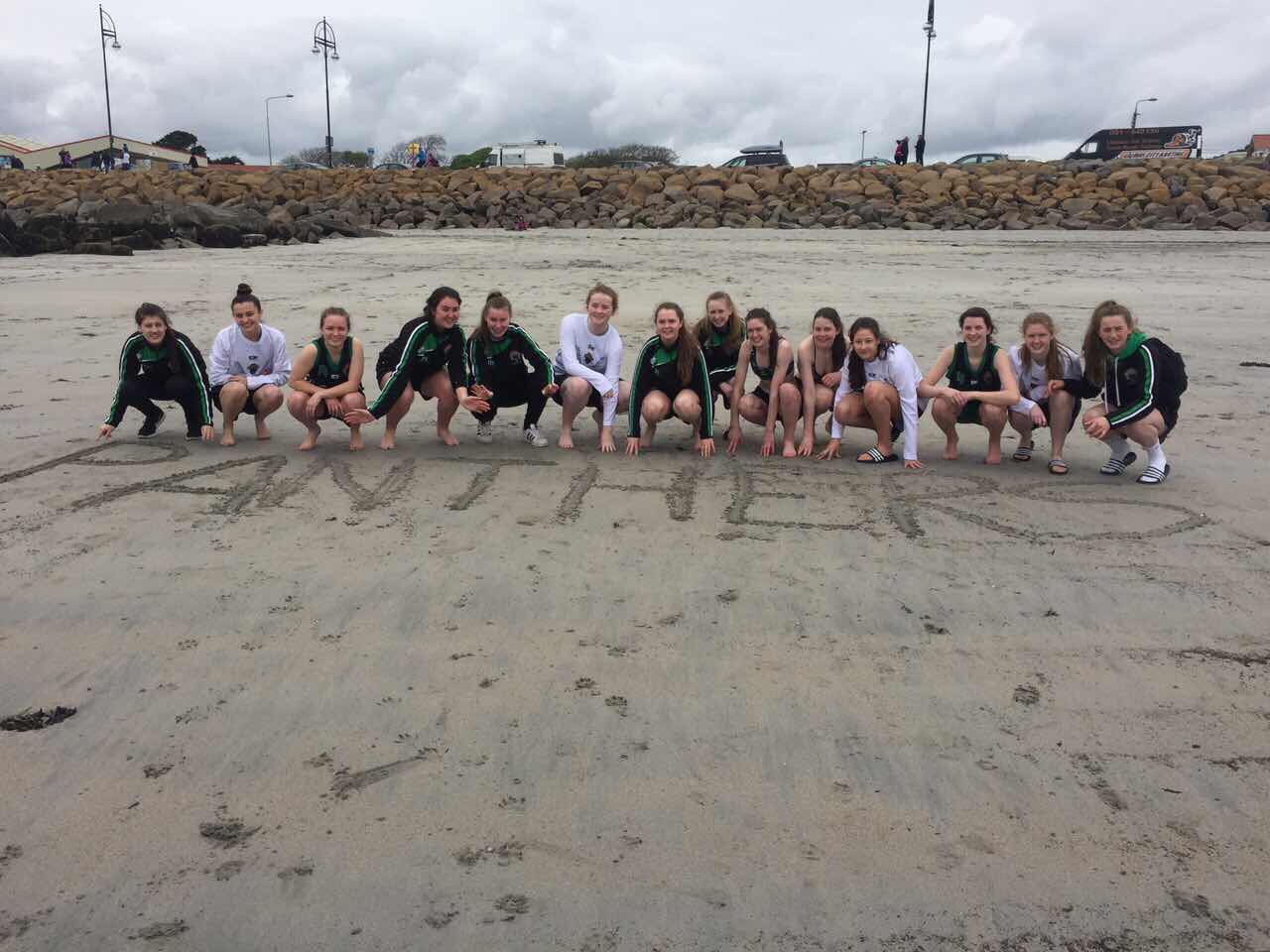 A great score by Hannah Collins settled Portlaoise and a determined Shauna Dooley tagged on another vital score to lift her sides spirits. Sophie Delahunt showed her athletic ability and speed as she broke out of defence creating opportunities for her side.

Sisters Amy and Ciara Byrne gave everything they had in this quarter challenging for every loose ball. Portlaoise needed a score to stay in touch and this came in the shape of Sarah Fleming, who coolly slotted away a huge three pointer to finish off a hard fought quarter.

The third quarter saw Liffey Celtics put the nail in the Portlaoise coffin. Portlaoise applied a press to close the gap however Liffey Celtics used their experience and speed to clock up five unanswered baskets to push the lead out to more than twenty points. A time out settled Portlaoise and a more determined side came back onto the floor.

The last three minutes of the quarter saw Portlaoise stay solid in defence as everyone on the floor worked hard for each other and played for pride of their jersey.

The finals quarter saw Portlaoise throw everything at the Kildare side. For the entire quarter Portlaoise played excellent defence, holding Liffey Celtics to just three points for the quarter. Rebecca Reddin entered the game and made an immediate impact.

A rebound by Ciara Byrne was out letted to Shauna Dooley finding Rebecca Reddin who took the contact going to the board and still finished the basket. The birthday girl duly slotted away her free throw for a great three point play. Jasmine Burke shone on defence leading the charge for her side.

Shona McKittrick, Lauren Dwyer and Aimee Collier took to the floor keeping the intensity up on both ends of the floor.

Reddin clocked up another two free throws before Aimee Collier added another seeing Portlaoise take the final quarter. Liffey Celtics ran out winners having dominated the middle two quarters. Liffey Celtics were eventual winners of the tournament and the game was a great test for the girls.

Portlaoise had to put their tough defeat to Liffey Celtics behind them as they quickly faced St Marys Castleisland in the 3rd/ 4th playoff of the competition.

Portlaoise put in a flawless performance in the first quarter as they came out all guns blazing with a crippling full court press from the tip off. 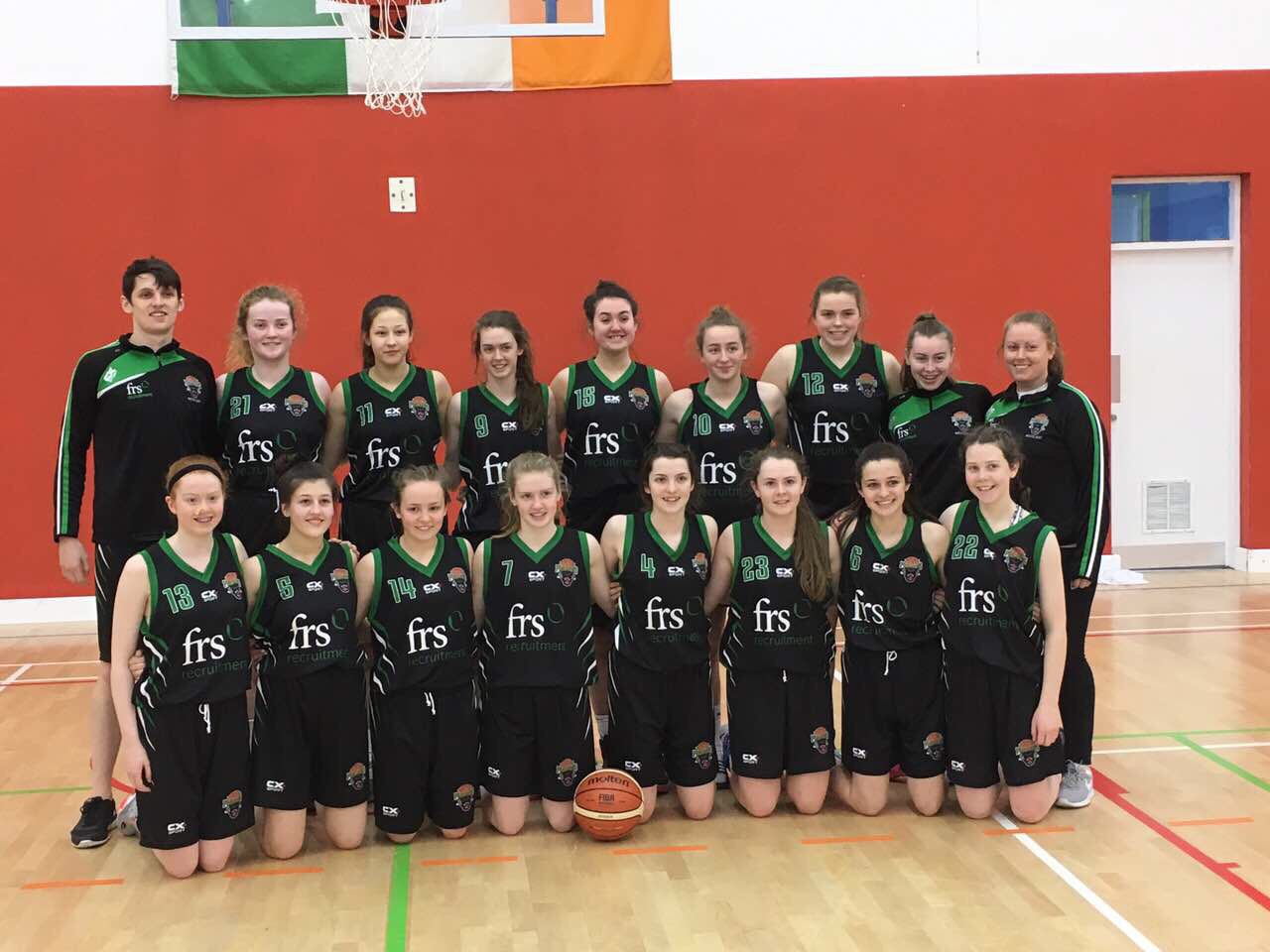 This quickly paid great dividend with two fantastic steals by Amy Byrne resulting in two scores by Byrne. Solid defence by the Panthers limited Castleisland to just four points for the first quarter and also led to numerous turn overs of possession which resulted in further scores by Hannah Collins and Amy Byrne.

A big three pointer at the end of the quarter by the ever reliable Shauna Dooley rounded off an excellent first quarter and saw Portlaoise lead on a score line of 15-4.

The second quarter was more evenly matched as both side traded scores throughout. Jasmine Burke and Hannah Collins owned the boards on the defensive end which allowed countless fast break opportunities for their team mates.

A drive to the board by Ciara Byrne followed immediately by a steal and a score by Byrne really put the Kerry side under pressure. A great assist by Sophie Delahunt found Hannah Collins inside who made a great move and made no mistake with the basket. The move of the game saw the Byrne sisters combine with two great passes which found Shauna Dooley under the board for an easy finish.

The full court press continued to cause CastleIsland difficulty seeing the solid Sarah Fleming steal the ball and finish a great layup. Ellen Garvey entered the game and immediately got a great rebound which she out letted to Rebecca Reddin who notched up another score for her side. Another score at the death by sharp shooter Sarah Fleming gave her side a 13 point advantage at half time.

Portlaoise Panthers continued to dominate with Amy Byrne coming back into the game after a bad knock in the second quarter and immediately had her name on the scoresheet again. Ellen Garvey was making her presence felt on the offence end and was extremely unlucky not to convert her chances.

Portlaoise sat back in a zone defence but continued to work hard thwarting many Castleisland scores. The Panthers girls continued to clock up scores with a long rebound and layup by Sophie Delahunt before Grainne O’Reilly slotted home a long two for her side.

O’Reilly showed her smarts with her next shot, while off target she followed the ball slipping inside the Castleisland defence rebounding her shot and finishing in style under the basket.

With eight seconds remaining in the quarter, Aimee Collier started and ended a lovely piece of basketball. In bounding the ball to Ciara Byrne who passed it down court to sister Amy who found Collier trailing to the basket to finish on the buzzer giving her side a nineteen point lead heading into the final quarter.

The last quarter was played with the same intensity as Portaoise went to finish the job they started. Castleisland threw everything they had at the Laois side. Shona McKittrick and Lauren Dwyer were able to the task and worked hard under the boards, stepping across to help their teammates stem Castleisland scores.

The final three minutes saw coaches Jack Dooley and Aoife O’Malley finish out the game with the out going U-16 players who played out their last few minutes at this age group.

This was a lovely touch and the girls saw out the game in fine fashion. Portlaoise claimed a well deserved third place finish in the completion which is the highest finish a club team has achieved in the competition.