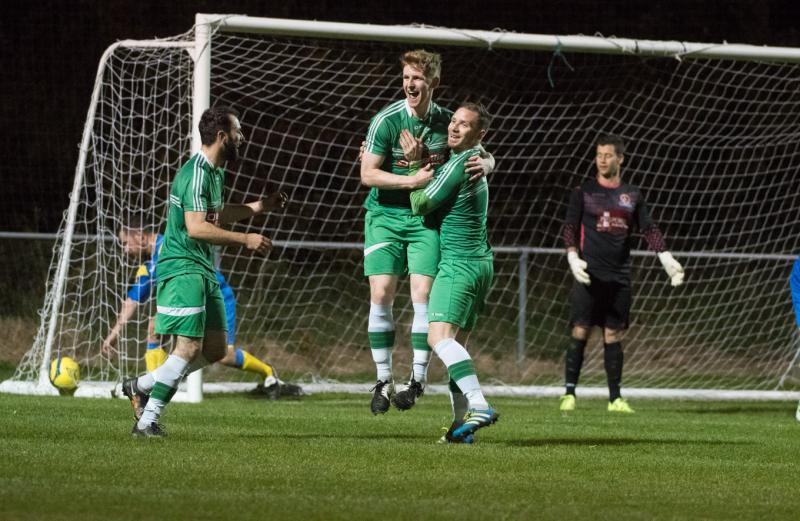 The home side knew they had to get three points to keep the pressure on Portlaoise, St James Gate, Inchicore and Greenhills, but were stunned with the visitors opening.

Paul Cahillane’s free kick was pushed onto the crossbar by Shane Davies, but Aaron Rafter reacted quickest to score a bullet header past the home keeper for his tenth goal of the season. Portlaoise went further ahead on 18 minutes when a long pass from Aaron Rafter found Jason Murphy and he held off Keith O’Callaghan to slot past Davies for his 21st goal of the season.

The home side settled into the game and started to create chances of their own as their direct play in the conditions was causing Portlaoise problems, and on the stroke of half time it was 2-1. Ross Hopkins found space on the right and his inch-perfect pass found Paul O’Carroll who headed home brilliantly from nine yards.

Skerries were now back in the game and took the game to Portlaoise, but brilliant defending by Eoghan White, Mark Brennan and James Mullaney kept them at bay while behind, Mateusz Cwienk was brilliant with his handling and decision making.

With 12 minutes to go Skerries had drawn level, a long ball into the area was not dealt with by Cwienk after he lost it as it looked like he was fouled, and Will Archer finished from close range. Skerries were pilling on the pressure now and went close when Shane Kiely’s strike from distance came back off the post.

With the game heading for injury time Portlaoise pushed forward in search of an equaliser. Cahillane’s free kick found White, but his strike was brilliantly blocked by Alex Doyle. From Cahillane’s resultant corner White was on hand to finish from close range and send his side into ecstasy.