Portlaoise snatch draw with Crettyard thanks to last-gasp Lawless free 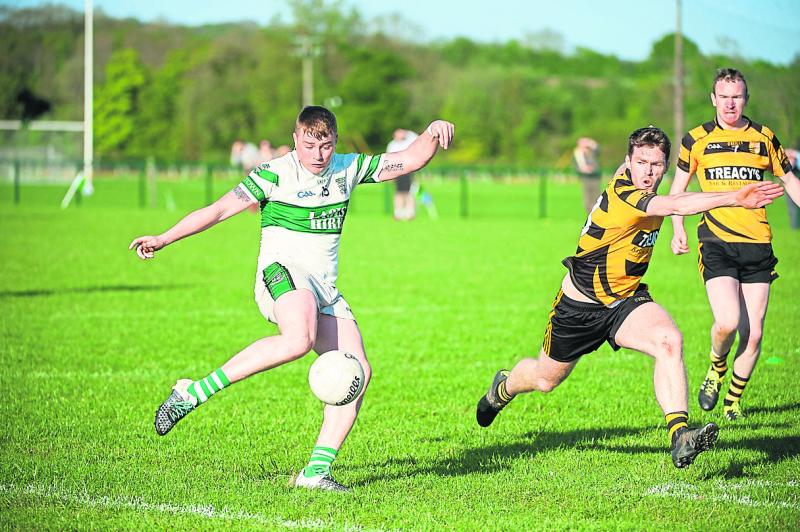 Portlaoise sealed a draw with an injury-time last-gasp free from Scott Lawless to share the spoils in Crettyard on Thursday evening.

Portlaoise took the lead in the opening stages through a Dean Cullen point to set the scoring underway, before corner-forward, Liam McGovern, followed suit to give The Town a two-point lead with four minutes on the clock.

Crettyard claimed the next two points through Eddie O’Reilly and wing-back, Cormac Phelan, to bring the sides level with less than ten minutes played.

Portlaoise again went on to take a two point lead with Scott Lawless converting a tricky free before Jack Brown marauded forward from centre-back to give his side a two point advantage.

Crettyard responded with a brace of frees from Cormac Murphy, both from similar positions, into a strong wind to bring the sides onto level terms once again.

Portlaoise and Crettyard closed out the half as Lawless and Cullen exchanged points with Eddie Reilly (2) to see the sides go in level at the interval on a scoreline of six points apiece.

Three points directly after the restart from Lawless had The Town in the lead yet again, only for Cormac Murphy to equal his opposing marksman with three of his own as little could separate the sides.

Another substitute, Cillian O’Shea, was sprung from the bench and rewarded Sammy Kelly’s faith in him with a well-taken point in the fifty-third minute to give Crettyard a slender one-point lead.

Crettyard had an opportunity to steal the result a minute later when Cormac Murphy found himself one-on-one with Portlaoise shot-stopper, Mick Nolan, only to see his effort superbly turned-away by the keeper.

Crettyard doubled their advantage on the twenty-five minute mark with full-forward, Liam Kelly, grazing the crossbar with his strike - only for Scott Lawless to bring Portlaoise back to within the minimum as the game approached injury-time.

In the fourth minute of injury-time Portlaoise broke forward only to see their progress halted thirty yards out, giving Lawless the opportunity to slot his eight point of the day and level the game.

Lawless stepped up to ball with complete composure and calmly split the posts to share the points in Crettyard.