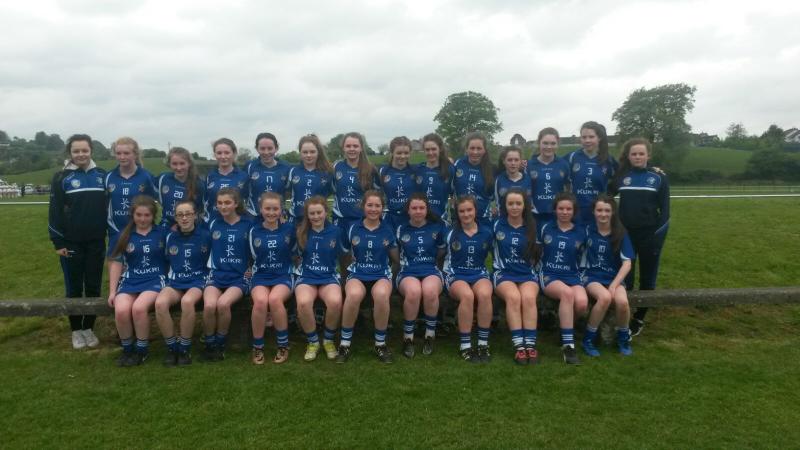 The Laois team which defeated Dublin in Thomastown.

A fantastic performance from Laois saw them claim the Leinster U-16 camogie title, as they saw off Dublin in Thomastown on Saturday.

Laois reached the final by overcoming Meath, Kildare, Kilkenny and neighbours Carlow in the semi Final to earn this well-deserved spot in the final.

Both teams were well matched on paper, and also on the pitch when the game started. Every score was hard earned, but Kirsten Keenan got Laois on the scoreboard early with a point from play. A free to Dublin a minute after was converted by Cliodhna Nicoletti.

It took another eight minutes for Laois to break down the Dublin defence with a point from Cathy Galbraith. Niamh Crowley for Laois was introduced as a blood sub for Molly O’Connor to receive attention. Molly thankfully returned to the field in time to see Eimear Fitzpatrick score the first of Laois’s goals of the day.

Another two points for Dublin from the stick of Nicoletti, one from a 45 and one from play, meant it was all still to play for. Just before half time a point from Kirsten Keenan left the half time score reading 1-3 to 0-3 in favour of Laois.

Laois introduced Jade Bergin for Cora Cuddy at the restart, but again it was Kirsten Keenan who opened up the scoring with a point from a 45. Another two points from Dublin’s Nicoletti kept the game tight.

Keenan added another two points from play, Eimear Fitzpatrick & Aine Cuddy popped points over before Cathy Galbraith got Laois’s second gaol. Eimear Fitzpatrick scored another point before Kirsten Keenan dropped a free into the back of the net for Laois’s third goal, leaving the score line Laois 3-9 Dublin 0-5.

The score line doesn’t reflect the tough battle this was between two good sides, but from Laois’s goalie Aedin Lowry up to the full forward line, this was a massive display of determination from all of the Laois players. This was a great entertaining final and a performance all the Laois players should be proud off.