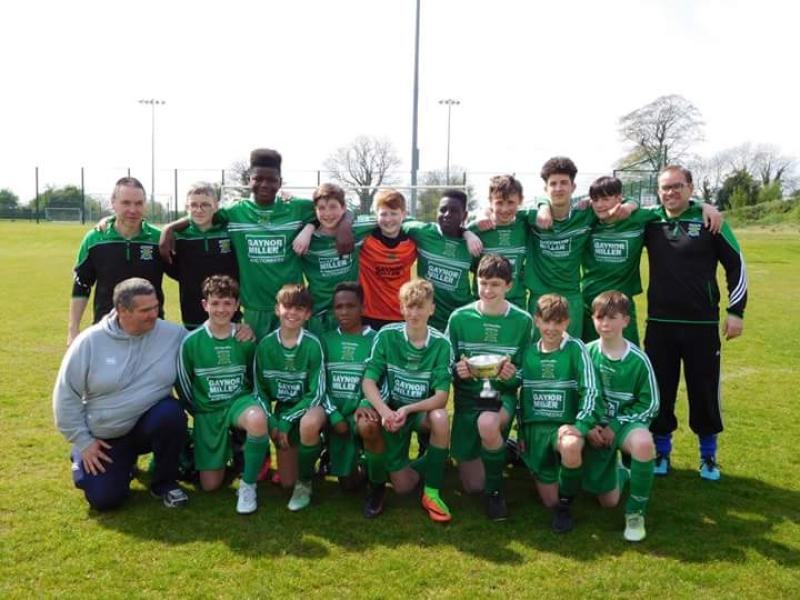 The Portlaoise AFC U-14 side, MSL champions.

Portlaoise travelled to Gainstown, Mullingar needing to beat the local Cougars in their final game of the season to secure the league title.

Within four minutes of the start their wonderful captain Aaron Brennan was felled in the box after a penetrating, mazy run. He dusted himself down in the glorious midday sun and calmly dispatched the penalty to the net, dispelling all the anxiety that had built up among his colleagues in the lead up to this vital game.

Mullingar, with nothing to lose, took the game to Portlaoise and were repelled on several occasions by the imperious central defensive pairing of Darragh Kelly and Kyle Enright, strongly assisted by tight marking full backs Jamie Preston and Michael Culleton along with their very reliable keeper Conall Rowney.

After twelve minutes of play Portlaoise finally succeeded in wrestling control of the midfield through the sustained efforts of Aaron Brennan and David Olubowale in the centre, flanked by the surging runs of Samuel Emmanuel and Ben Dempsey on the flanks.

Portlaoise doubled their lead when striker Brian Smith pounced on a poor goal kick, skipped past the centre half and coolly slotted the ball into the bottom right corner with his left foot.

Luke Dunne O’Connor thought he had made it three on twenty minutes only to have his effort ruled out for offside. Within two minutes Luke did smash the ball to the net after being set up by his partner Brian to leave the half time score 3-0.

Within seven minutes of the restart it was 4-0 through Ben Dempsey who finished from close range after wonderful combination play involving Aaron Brennan, Brian Smith and Luke Dunne O’Connor. Sub Daryl Ntumba was now causing mayhem for the Cougars defence.

He forced the keeper to make two smart saves and then he was unlucky to miss the target with a penalty that he had won himself with a powerful dribble. The ever-dependable Josh Hogan won a ball out on the left and threaded a beautiful pass to Tiernan Cahill, who struck a pile driver for the near top corner from all of 25 meters that was superbly saved by the Cougars keeper.

The experienced referee who had afforded the teams a water break in either half called a halt to proceedings leaving Portlaoise MSL U-14 league champions.

Exciting winger Jason Horan who had contributed greatly to the team’s achievement over the course of the season on the right flank was unable to participate in this game through injury.

The trophy was presented to captain Aaron Brennan by MSL chairman Chris Nestor to the delight of mentors Pat Horan, Shay Preston and Mick Dempsey. It has been a truly marvellous achievement for this group of boys to win the league.

They recovered from a 6-2 hammering from Mullingar Athletic early in the season to record narrow victories over arch rivals Tullamore, who had relieved them of their league and cup trophies of 2015 in 2016. Perhaps Portlaoise's finest result came when they managed to secure a 1-1 draw in the return game against Mullingar Athletic in early February.

All this was achieved having lost their two brightest stars Colin Conroy and Aaron Doran to St Kevin's Boys at the start of the season. We wish them both well in the SFAI All Ireland Final this coming weekend against Belvedere, who controversially defeated Portlaoise at the quarter final stage in 2016.