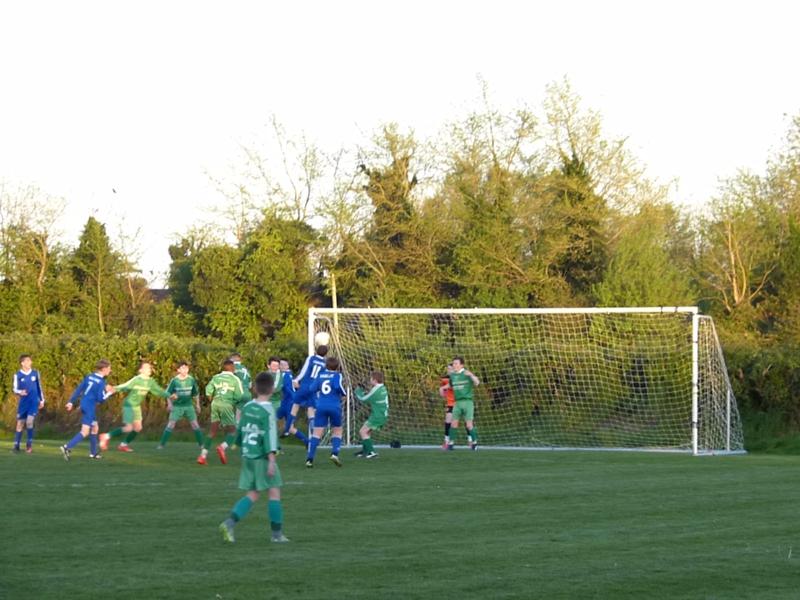 Action from the Portlaoise v Naas Blue game at the weekend.

After a few weeks awaiting to learn the outcome of discussion between both the Midlands and Kildare Leagues, after Naas did not arrive for a previously arranged first leg, Portlaoise Utd were again required to host Naas Blue and to play both legs in this U-13 Midlands Cup semi final tie.

It was a perfect evening at Rossleighan and both teams were well up for this, with Utd maybe trying to repay a defeat at the hands of Naas in the SFAI Cup early in the season.

To say the game was played at a frantic pace would be an understatement. Physically Naas Blue were a taller and stronger looking team than Utd in a lot of areas around the pitch, and they were able to ride out early Utd tackles and retain the ball.

A good competitive start by both sides saw Utd having to defend and put the ball out for a throw.

From the throw, the receiving Naas player took the ball and threaded it past Utd's defence reaching the Naas striker in the box. He managed to hold off the Utd defenders and create half a yard of space and with less than two minutes gone, it was 1-0 to the away side as he poked the ball past Conor Brown, clinching an important away goal in this two legged encounter.

Utd's heads could have dropped at such a poor start against a strong side, and they could have let Naas dominate, but they didn't. Instead Utd got more and more into the game.

Naas were very confident at this stage with ball players all around the pitch but Utd, through Barry Fitzpatrick and Evan Hewitt in defence and Cian Rafter in midfield, were making superbly timed tackles.

With ten minutes gone Ben McDonald sent a cross in to find Jamie Toman who did well to make a chance which yielded a corner. Again another corner resulted as the ball was cleared by the Naas defence.

A deserving milestone for towering Utd defender Barry Fitzpatrick then arrived, as he produced a good finish at the back post as Ben Doyle nudged the ball into his path, and Barry recorded his first goal of the season. It was now 1-1, and Utd seemed to shock Naas a bit with a quick comeback.

Only a minute later good hassling by Cian Rafter and Ben Doyle prevented a quicker build up from midfield by Naas, but the ball went to a Naas player who had an excellent go from 25 yards that just fizzed over the crossbar. Naas were very dangerous after getting over the equaliser quickly.

The next period really was end-to-end with Naas getting the ball on the floor and playing nice passing football. This was also how Utd like to play and so when one team was in possession, the other team was closing down as quickly as they could. It was a good, fast, competitive battle to watch. Utd really had upped their work rate though and every man was working tirelessly for the team.

Utd tried to work a few chances too and one instant saw TJ Delaney and Jamie Toman have a great piece of interplay before being crowded out by the Naas defence.

Just afterwards on 20 minutes, Cian Rafter fed Dan Ubesie out right and Dan worked himself well into space to get a shot away, but it went just wide.

Then Ben McDonald played a long ball along the right wing that seemed to be just out of play but Dan lunged to keep it in after super running on his part to keep it in. Quickly he crossed to TJ and both himself and Jamie went for the same ball and got in each other's way. The breaking ball spun out to Ben Doyle but his shot was put out for a throw off the reacting defender.

On two occasions Conor Brown pulled off the start of a selection of unbelievable saves from this match as he denied on each occasion a great goal scoring opportunity for Naas.

The 26th minute saw Cian Rafter awarded a free close to the edge of the box. A lovely strike by Evan Hewitt into the box followed, but it was saved by the Naas keeper. A counterattack chance straight away by Naas was put in the net but then ruled out rightly for offside.

With one minute left in the first half, Portlaoise scored a wonderful goal. Evan Hewitt kept running and supporting a very solid Ben McDonald with the ball. Naas won the ball, but Cian Bartley Bray made an excellent tackle and brilliantly found Dan on the right. He burst forward at pace and fired a perfect cross to find Ben Doyle flying in to beat the keeper, making it 2-1, and Utd had pulled in front. Normal time in the half was up, but there was still time for chances in injury time.

Evan Hewitt defended well and he passed to Ben Doyle, who in turn released the ball to Jamie Toman, who was dragging the Naas defence everywhere alongside TJ Delaney, who was beating much taller defenders in the air.

Jamie attacked at speed but was just pipped to the ball by the defender as he was ready to pull the trigger and out it went for a corner. At half time it was 2-1 to Utd after a first half that flew by.

Naas seemed to emerge for the second half with more intensity and intent to get back on level terms quickly. Utd would prove to be as resilient, as they have been all season, with Man Of The Match performances in several positions.

Conor Brown showed electric form again five minutes into the second half as he pulled off a super double save at the feet of the Naas attackers. The first one was a brave dive at the feet and the second a super reaction recovery to get back up immediately to block, when a goal was certainly easier to see coming.

Three minutes later a super ball by Ben Doyle found Jamie Toman, who had loads to do taking on a defender and the keeper. Jamie finished brilliantly past keeper and the covering defender, who tried to force him wide and the score was 3-1. Conor Brown's saves were proving the difference in who could take their chances.

On 41 minutes yet another good save by Conor was well supported by a strong defensive tackle by Barry Fitzpatrick, who was back to fine form again to put the ball out for a corner. A quickly taken short corner came from Naas but the offside trap worked as it came in to Utd's goalmouth and a free out resulted to Portlaoise Utd.

A minute later Naas Blue thought they were back in it for a split second as the ball connected superbly with their attackers head from a sweetly struck corner. What stopped it was a contender for save of the season when Conor Brown had a cat-like reaction to stretch an arm out to his right hand side, and pushed the ball out wide while diving. It drew applause from all who watched.

Just afterward Ben Doyle, who was having a great understanding with Jamie Toman supplying his raiding runs, released Jamie again who passed to Dan in the box, but the ball went just wide enough to go over endline. Dan was doing everything but sticking the ball in the net.

David Burke and Cian Bartley Bray had been playing well as full backs against a strong Naas attacking threat. Cian had already been crucial in setting up one goal and David Burke pulled off one of the most important and best timed interceptions as Naas broke at speed in numbers.

The Naas attacker was inside the box and David managed to get in between his much larger opponent and the ball and pluck the ball off his toe just as he was about to strike. It was as important as scoring a goal to prevent Naas getting a foothold back in the game.

David then passed to Cian Rafter who was fouled on the ball and he won a free inside the Naas half. Ben Doyle took it but the big Naas defender headed it away out of the box. Jamie fought well to get it back but the chance came to nothing.

Substitute Mattie Kocon defended well down in the right corner making another important tackle and cleared to safety via the clouds above. Cian Rafter was earning frees in the middle and was totally in control.

On 55 minutes it was 4-1. Luke Makem took the ball in midfield and took it slightly to the left side before feeding a lovely swift pass to Jamie. Jamie rode a tough tackle, staying on his feet and seemed to be going nowhere as he was under pressure, but he shot from the endline near the corner and it caught out the Naas keeper who deflected it into his own net.

In the last three minutes of the game, Conor pulled off two more good saves and Ben McDonald had another good shot on goal from distance, but unluckily it went wide after good support and build up play from Kanye Tshula, Ben Dwyer and John Ging.

It was 4-1 at the final whistle and fair to say that Utd's work rate and pride in the fight for each other, as well as several stellar performances, deserved the win.

The referee kindly spoke to the players after the game and commended the Portlaoise Utd team for their performance. David Burke and Ben McDonald were singled out for Man Of The Match mention by the ref but he indicated there were leaders everywhere.

Conor Brown got special mention from all in attendance for a Spider-Man Of The Match performance with his reflexes and agility in keeping the score line as it was. 4-1 to Utd at Half Time in this tie and the second leg will no doubt be as competitive in Naas.