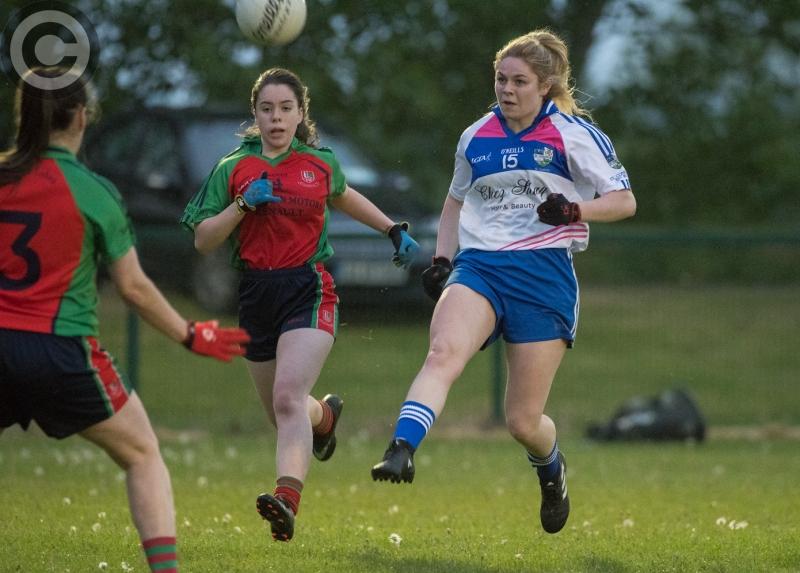 A young St Conleth’s side recorded the first surprise of this year's Laois Ladies SFC last Thursday night, as the Intermediate champions held out to win by the minimum against Timahoe.

The game was a tight and entertaining affair throughout, with the sides level at half time, and both sides taking and losing the lead several times, but St Conleth’s finished the stronger to get the opening round victory.

St Conleth’s got the game off to a roaring start with a goal from Allana Havill after Eva Galvin won possession back, and Havill finished well. Timahoe replied wih a Mo Nerney point, before Alanna Havill added to her tally with a point.

Mo Nerney responded again with a brace of points, but St Conleth’s pushed clear with a second goal. Eva Galvin was again at the heart of the goal, with a fine ball into Havill, who slid it into the path of midfielder Marie Byrne, and she fired it off the crossbar and in.

St Conleth’s were completely dominant in the first quarter of the game, as they pushed their lead out to seven, thanks to three unanswered points from the boots of Naomi Luttrell, Havill and Galvin.

However, all that hard work was undone when Mo Nerney was given space near the square, and she fired an unstoppable shot into the top left corner of the net. Nerney added another one, before St Conleth’s Sinead Cullen got on the scoreboard with a point.

Timahoe then reduced the gap to one thanks to a Nerney penalty, after Shona Barry was brought down in the box. The sides would go into the break level on a score of 2-7 to 2-7, with the game perfectly in the balance.

Whilst the second half didn’t have as many scores, the game was still as dramatic, as it was very close right to the end. St Conleth’s started the second half better with scores from Sinead Cullen and captain Claire Fox putting them two ahead.

However, Timahoe would again respond characteristically and in devastating fashion. Shona Barry made room for a shot, and her strike had too much power for Lydia Darley in goals.

The sides traded scores as we entered the final quarter, but St Conleth’s showed their character this time round with points from substitute Allana Keogh and a Cullen free. They would not relinquish the lead, as Timahoe failed to find room through a packed defence.