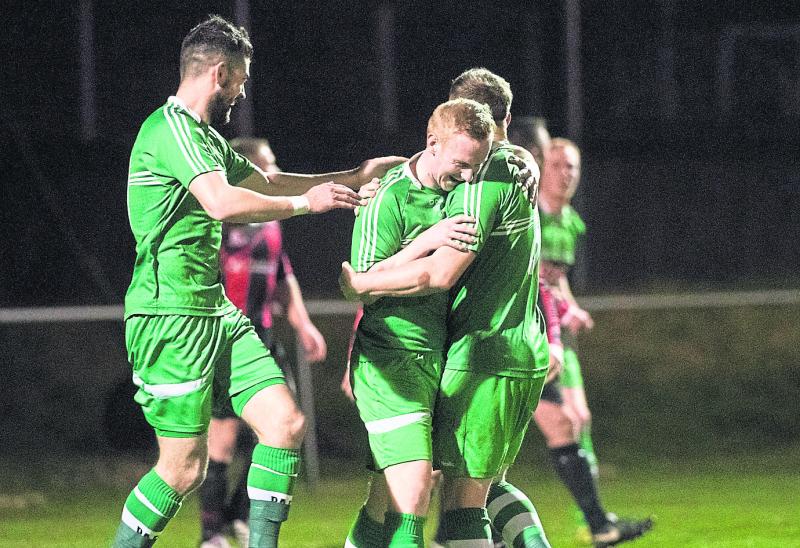 Portlaoise players celebrating during the Hartstown-Huntstown game this year.

They did so without kicking a ball in what was the defining game of the campaign, as their nearest rivals St James Gate drew 1-1 with Ballyfermot Utd. That result meant Portlaoise finished top of the table, which secured them their first ever piece of silverware at intermediate level.

Having already secured promotion to LSL Division 1A with a couple of rounds of the league left to play, the trophy is the cherry on top for Portlaoise, who are unbeaten since December 11 of last year.

It was a nervy night last Tuesday for Portlaoise though, and in particular manager Ger Dunne and assistant manager Gary Seery, who went to watch the St James Gate v Ballyfermot game. Both teams had to win, with Ballyfermot taking the lead and St James Gate drawing level in the 90th minute.

That set up a dramatic finale, as both teams went in search of a late winner; St James Gate in order to win the league, and Ballyfermot in order to avoid relegation. In the end, the result suited neither of them, but it was exactly what Portlaoise wanted.

Speaking last week, Portlaoise manager Ger Dunne was understandably delighted to bring home a historic bit of silverware for the club. The turning point, he admitted, was the loss to Knocklyon last December. "We lost our last game before Christmas last year.

The promotion means Portlaoise are now back to LSL Division 1A, the level they were last at when they dropped out of the Leinster Senior Leagues around fifteen years ago. The first team's performances this year have given the whole club a boost, and Dunne is delighted that the younger players in the club have role models within the team.

"When the first team is going well" remarked Dunne, "it raises the whole profile of the club. We wanted to give a bit of an identity back to the club, and for the young players to have senior players to look up to, that they they would want to be like Colm Poole, James Mullaney, Jason Murphy, Paul Cahillane or Eoghan White.

"We had four of the U-19 squad that won the double in with us this year, and they will be back in with us next season as well, and will do a bit of work over the summer."

Having built up such an exciting young team, the key now is to try and keep them all together, a task which Dunne admits won't be easy. "Back in January and February I was getting a good few calls (about players). Lads had chances to go, but wanted to see out the season with us.

"There is no way I would stand in any player's way if they have a chance to play at a higher level. They have to want to play for us, but they might want to play at a higher level too, and some of them might have a chance to play in the League of Ireland. If they want to go, I would encourage them to do it, but maybe go and train with the team for a week first, just to make sure it is what they want, because sometimes the grass isn't always greener."

While the team's season is now over, and players have a few weeks off, the workload doesn't slow down for the manager. Along with coaching the Portlaoise team, Ger works alongside Martin O'Neill and Roy Keane as a performance analyst with the Irish senior team. He's also doing a Masters in Performance Analysis, is in the middle of the UEFA Pro License coaching course and he's getting married this year too.

With all of that on his plate, he still has to come up with individual training plans for all of the Portlaoise squad to work on over the course of the summer.

He still has plenty of work ahead for the Pro License as well, some of which will include international travel, but he admits his place on the course has helped him and team this year. "I was very lucky, because I started the UEFA Pro License this year, and that really helped with the team.

"Martin O'Neill and Roy Keane encouraged me to do the course, so I could ring them up and ask them 'what would you have done here', or ask for their advice during different parts of the season. I am doing the course with coaches who are in the League of Ireland or international football, and I could ask them things as well, so that was a big benefit too."

If Portlaoise continue on this upward curve, then it won't be long before Dunne is the man the next generation of aspiring young coaches are ringing up looking for advice.

The next act for them is to now collect the trophy, which will happen in June, while tickets have also secured for a team trip to the Aviva for the Ireland v Austria game on June 11.

They will return to collective training in July, but for now, they can bask in the glory of a successful season, and dream of bigger and better days ahead in the 2017/18 season.