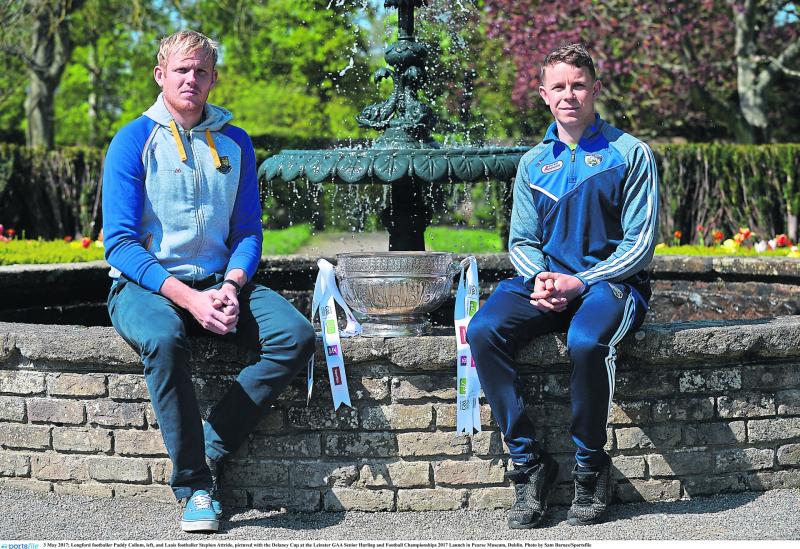 Laois senior footballers will look to kickstart their 2017 season this Sunday afternoon, as they welcome Longford to O'Moore Park for their Leinster SFC opener.

After what has passed already this year, it wouldn't be an understatement to say this Sunday's clash with Longford is a hugely important game.

Having appeared to sleepwalk through much of the league, Laois supporters will be looking for signs of life from the county's senior football team this weekend. A win would not rectify many of the problems which we saw earlier this year, but a defeat could do untold damage to an already struggling team.

There was much to work on for Laois after their NFL Division 3 campaign, but there three things in particular that Laois need to do if they are to write the months of February, March and April off as an anomaly - 1. Stop teams running through the middle, 2. Keep fifteen players on the field, and 3. Get the ball to Donie Kingston as much as possible.

There are other things to work on too of course, but to this observer at least, these are the most pressing. To write them out like that, it is almost disappointing to see how basic the improvements need to be.

To watch Laois defend at times in the league was to be given an unwanted lesson in how to be an accommodating host. Opposing teams were welcomed into the Laois half, made to feel comfortable once they were there, and then given the keys to come back and visit at their leisure.

Far too often opposing teams picked off scores with nothing more than a simple hand pass or kick pass to unlock the Laois back line. Marking was loose, tackling was too weak or too poorly timed, and runs weren't tracked.

Laois are short of man-markers, and some players have had to play out of position, which certainly hasn't helped. But they can't be excused for the simple act of not tracking a run, or standing a couple of yards off your man as he wins possession and kicks a score.

The team needs to be more compact at the back, funnel back quicker to cut off opportunities for the opposition to exploit space, and be a bit more physical too. Not dirty, but physical - making tackles count, and in some cases, if the situation calls for, making them memorable, so the next attack might not flow forward at the same speed.

If Laois have improved at all since their last outing against Offaly, it will become immediately evident the moment Longford launch an attack this Sunday.

Laois recorded one of their two wins in NFL Division 3 against Longford in O'Moore Park, but Longford caused them plenty of problems that night, and Laois needed a stunning display from Donie Kingston to get them over the line.

As seemed inevitable for most of the league, Laois had a player sent off in that game (Evan O'Carroll), and perhaps it's a sign of how bad Laois were in the league that the simple act of keeping all 15 players on the field this weekend would be seen as an improvement.

You feel something like that shouldn't need mentioning, but it happened with such a worrying degree of regularity in the league that it is something that needs urgent attention.

If you don't think it is a problem then consider this statistic - Laois had a man sent off in six of their seven league games. In three of those games, Laois lost by two points or less, so it is certainly something what has cost them this year.

Maintaining focus is vital for everyone, and there are a couple of players in the squad who owe their team mates some degree of restraint for the rest of the year.

Too many of the red cards were from either lazy tackles or silly, petulant acts. Both of these should be easily rectified, and it will be a very worrying sign indeed if Laois lose another player this year for either of those reasons.

The final point raised above, in relation to Donie Kingston, is basic enough. Put simply, the Arles-Killeen attacker is probably in the best form he has ever enjoyed at senior intercounty level with Laois, and he looks a threat every time he's in possession. In the final round loss to Offaly he scored 3-4, and the game before that, against Longford, he kicked 0-9.

His performance on that night will have had Denis Connerton and his management team trying to come up with a game plan to stop him this Sunday, but as Laois supporters know, when Kingston is in form, there are few in the country who can curtail him.

He protects the ball so well once he gets his hands on it that he makes it very difficult for his marker to dispossess him. He can hold off a defender and still comfortably shoot off either foot, and you would have to imagine that if Laois are going to enjoy any success this summer, it will be on the back of Kingston maintaining his early-season form.

He picked up an injury a few weeks back, but he is thought to be recovered from that, and so free to wreak his own brand of havoc on Longford this Sunday.

Laois really do need to win this game, because the fall out from failing to do so is worrying to even consider. Should Laois lose, clubs in the USA will come calling, an already small support base will lose a few more members, and a team low on confidence will be subjected to another crushing blow.

Longford will provide stiff opposition, and Laois will have to keep a close eye on Robbie Smyth, who kicked six points against them in the league.

With Laois, the equation is simple. Defend better, keep all your players on the field, and exploit Donie Kingston's talent. Knowing it, and having the confidence to go and do it after everything that has happened this year, are two different things entirely though.

Peter Creedon's Tipperary teams never really set the world alight in the league, but they were competitive in the championship, and that is the trick he must repeat now with Laois.

It is important that he does, because there is a lot riding on this game.