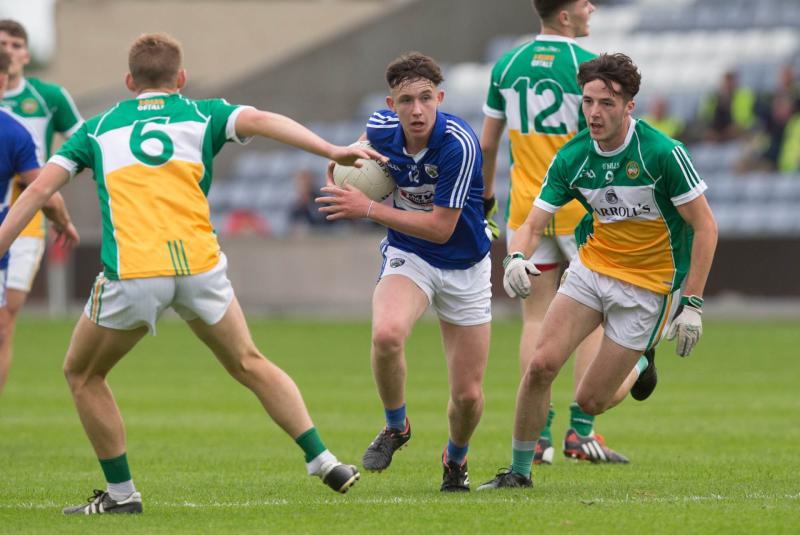 Ciaran Comerford scored a goal in the first half for Laois.

The Laois minor footballers hopes of Leinster MFC glory were dashed on Saturday afternoon in Newbridge, as they lose out to Kildare by four points.

A brilliant first half from Laois was matched by an even better second half from Kildare, who trailed by seven points at one stage after two quick-fire goals from Laois in the 16th and 17th minutes.

Laois could hardly have asked for a brighter start, as they showed no signs of nervousness in the opening exchanges. Jack Owens floated over the first point of the game inside of a minute, and Laois quickly built on it.

Ciaran Comerford spun out of a challenge on the right wing, and with a quick glance at the posts, he landed a superb score from an acute angle. Less than a minute later Laois were three ahead, as captain Alan Kinsella made space for himself 30 yards out, and his trusty left foot did the rest.

It was a dream start for Laois, as it allowed them to settle in the game quickly, and Kildare were clearly shocked by the early barrage. They didn't open their account until the eighth minute, when midfielder David Kelly curled over a free.

Another eight minutes would elapse before we saw another score, as the play ebbed from one end of the field to the other, with no clear scoring chances created. Referee John Hickey was economical with the whistle, which meant there weren't too many frees either.

James Carey eventually ended the scoring drought with a fine point from distance for the home side, but the Laois response was clinical.

From the resulting kickout, they worked the ball superbly. It eventually found its way to Ciaran Comerford 14 yards out, and he played a quick one-two with Alan Kinsella, before slotting home from close range.

With Kildare reeling from that score, Laois landed another blow within seconds. Comerford's shot for a point came up short, but it was fielded superbly by Niall Dunne, and his low shot found the bottom corner.

Laois now lead by seven, 2-3 to 0-2, with 17 minutes played, but would not score again in the half, as Kildare chipped away at the lead.

They added three points before half time, all from frees, as Darragh Kirwan kicked one and David Kelly hit the other two. That left four in it at the break, 2-3 to 0-5.

He pointed with a little over two minutes left, before a one-two with Shane O'Sullivan allowed him to palm the ball to the net in the 35th minute. A David Kelly free moments later put Kildare ahead for the first time.

Laois still hadn't scored since the 17th minute, and Kildare would go two ahead thanks to Shane O'Sullivan before Laois ended that barren spell. It was sub Mark Barry who finally go Laois back on track thanks to a lovely point from the right wing, but Kildare hit back immediately through Darragh Ryan.

Diarmuid Whelan tapped over a close range free to get Laois back into it, but Kidlare were building up a head of steam now, and they hit four of the next five scores to lead 1-13 to 2-6 going into injury time.