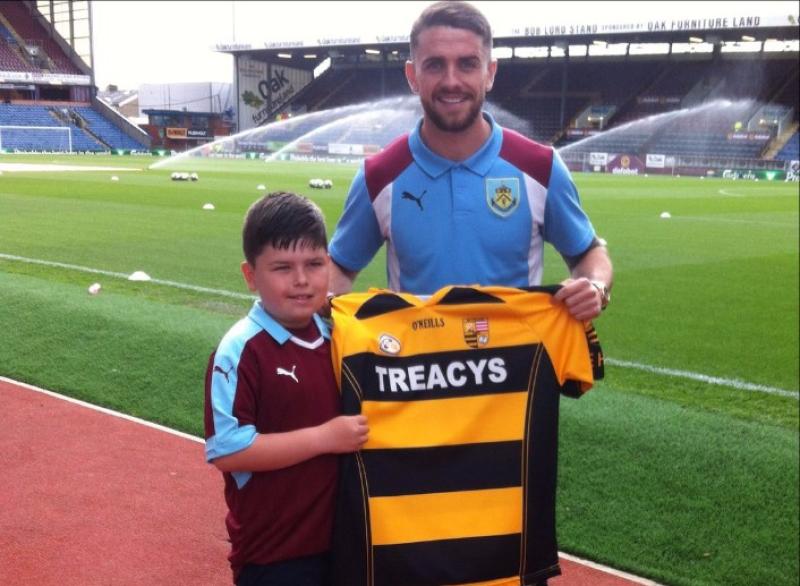 Andrew Whelan, from The Heath, presenting Robbie Brady with a Heath GAA jersey.

Laois boy Andrew Whelan certainly won't forget 2017 any time soon, after he got to meet his sporting hero Robbie Brady for the second time recently.

Earlier this year Andrew's story became national news when it emerged his present from Santa, tickets to see Robbie playing for Norwich, were left worthless after Brady transferred to Burnley on January 31.

When FAI Chief Executive John Delaney heard of the story, he got in touch with the family and arranged to have Andrew meet Robbie, where he was presented with a jersey and given the opportunity to be the team mascot for the international friendly with Iceland.

If that wasn't enough, Brady's new club, Burnley, also got in touch with the family, and invited them over for their final game of the season against West Ham.

His mother Samantha outlines what the experience was like for Andrew. “He had a trip of a life time, Burnley FC were so welcoming and very nice in every way from start to finish. He saw what happens in the background, was on the pitch side, met his hero Robbie Brady and the rest of the Burnley players and had great seats for the match.

“The four Irish players started on the day which made it more special, and met them all.”

Having been presented with an Irish jersey by Robbie Brady the last time they met, Andrew reciprocated by presenting the Irish international with a Heath GAA jersey in return.

“A huge thank you to Burnley FC especially Darren Bentley and Harriet Harbidge for organising this from start to finish” said Samantha. "Also the Holiday Inn Express in Burnley, Stephen Walmsley and Sam Jackson, where we had a lovely stay, an outstanding Hotel where everyone was so nice and welcoming."