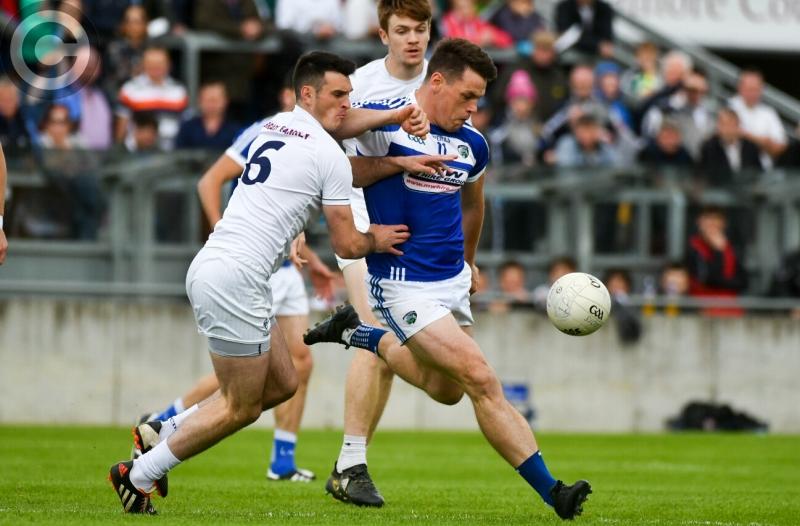 John O'Loughlin about to shoot for Laois. Pic: Denis Byrne.

Laois were outclassed by Kildare in a disappointing Leinster SFC quarter-final at O'Connor Park in Tullamore on Sunday.

Despite taking an early lead thanks to a brilliant Donie Kingston goal, Kildare comfortably secured the victory, with 14 points between them in the end. Once Kildare found their stride they scored with disappointing ease, going on a run of seven points in a row before half time.

Laois could hardly have hoped for a better start, as they had the ball in the Kildare net within a minute of the throw-in. Laois broke up a Kildare attempt to clear their lines in defence, and the ball was quickly worked to Donie Kingston.

A goal didn't seem on when he got the ball in his hands 35 yards out, but he powered past a couple of defenders and held his composure under pressure to shoot low past Mark Donnellan.

It was the perfect start to the game, but Laois didn't capitalise on it. Kildare seemed unfazed by the score, and Kevin Feely landed a free moments later to open their account. Cathal McNally soon narrowed the gap to one, and by the seventh minute the sides were level, Mark Donnellan kicking the equaliser from a 45.

To complete the turnaround, McNally kicked his second to push Kildare into the lead, but a Donie Kingston free in the 15th minute restored parity. Again Kildare edged back in front, this time when Daniel Flynn dispossessed Denis Booth and pointed from the left wing.

Laois were hanging in well at this stage though, despite playing into the stiff breeze, and Evan O'Carroll's sweetly struck free from just outside the 45 got them back on level terms. Unfortunately for Peter Creedon's men that score, in the 22nd minute, was their last of the half.

Kildare started to take control after that, while Laois were unable to help themselves. At one stage, five attacks in a row broke down without a shot at goal, and Kildare made the most of that profligacy.

Ollie Lyons got up from the back to put them ahead at 0-6 to 0-2, and that was the first of seven points in a row from Kildare. Daniel Flynn added two more in quick succession, and then Kevin Feely started to dominate at midfield.

Laois were being opened up every time Kildare ran at them with a bit of pace, and by the time David Coldrick blew his half-time whistle they were seven clear, 0-12 to 1-2.

Kildare made it eight in a row on the restart, David Slattery pointing from close range. Laois finally broke the Kildare scoring run after that, Donie Kingston pointing an excellent free from way out on the left wing, but it failed to spark anything in the line of a comeback.

Johnny Byrne and Niall Kelly pointed within seconds of each other to re-affirm their dominance, and they hammered it home after that. Niall Kelly added another point for Daniel Flynn jinked away from his marker to fire a shot into the top corner of the Laois net.

That score came with 22 minutes to go, and those were a long, long 22 minutes for Laois. Kildare picked off points at their ease, while Laois only scored their first point from play in the 49th minute, through Alan Farrell.

The final stages of the game were no more than a training game for all involved, as Kildare cruised to a 14 point win.