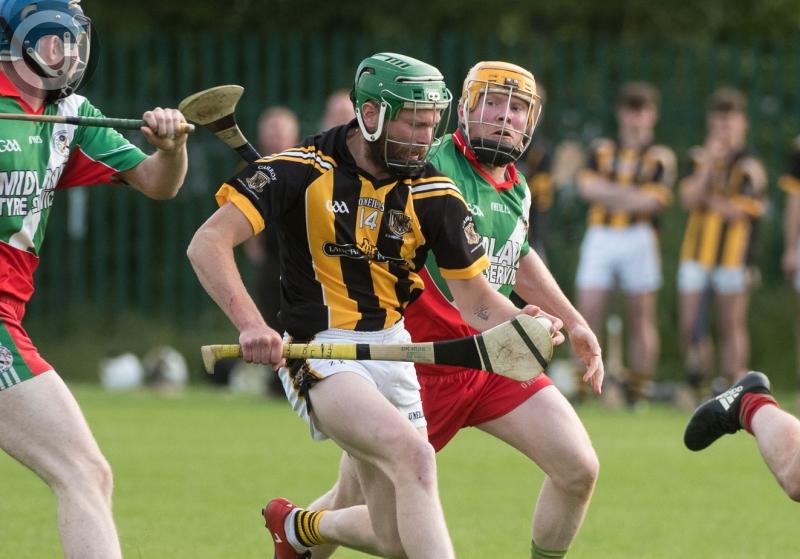 Zane Keenan on the attack for Camross. Pic: Denis Byrne

Camross will meet Clough-Ballacolla in the Division 1A league final after they overcame a stern test in Borris-Kilcotton on Sunday night.

The victors lead by seven at the break, but Borris-Kilcotton brought it back to level terms with five minutes remaining, only for Camross to display great character to fire over the last two points of the game.

Aaron Dunphy and Darragh Duggan exchanged points during the opening minutes of this one, before Camross opened up a two point lead thanks to scores from Lorcan Burke and Niall Holmes. Brian Stapleton and Zane Keenan swapped points, before three on the trot from Borris-Kilcotton meant they regained the lead. The scores came from Conor Kilbane, Emmet Jones and Aaron Dunphy.

However, Camross had their best passage of play and fired off 1-5 without reply to take a commanding lead. Andrew Collier (free) and Zane Keenan pointed to restore Camross’s lead, before their first and only goal of the game arrived. Danger looked imminent when full back Stephen Phelan mistimed his jump, and Zane Keenan ruthlessly capitalised with a sweet finish.

Two Tomás Burke points were sandwiched between one from Lorcan Burke as Camross went further in front. Aaron Dunphy and Zane Keenan swapped points at the end of the first half to leave the half-time score at 1-10 to 0-6 in favour of Camross.

Danny Fitzpatrick’s shot dropped well short, but Conor Kilbane was left unmarked and fired one into the back of the net to revitalise his side. The sides traded points through Zane Keenan (frees) and Stephen and Aaron Dunphy of Borris-Kilcotton.

Darrell Dooley came up from wing-back to put Camross three to the good, but two Aaron Dunphy frees reduced it to one.

The introduction of the returning PJ Scully proved a wise one, as he put over two frees to have Borris-Kilcotton up by one. Niall Holmes and Damien Keenan replied for Camross, before PJ Scully landed a monster point to put the game in the balance.

However, Camross scored the last two points, and can look forward to a league final date.