Finlays combine to steer O'Dempsey's to ACFL Division 1A title 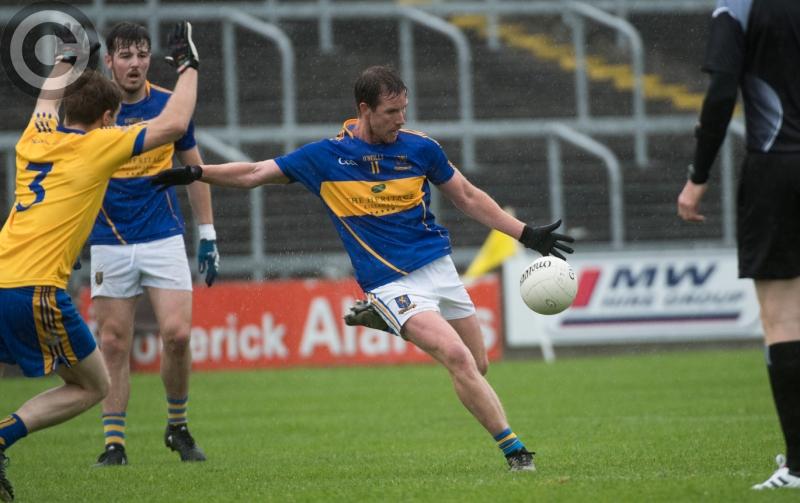 Having been level at the break, O’Dempseys’ second-half performance was enough to see them crowned League champions following a four-point victory over St Joseph’s in O’Moore Park on Sunday evening.

The in-form team of the League, minus some influential players, were defeated at the final hurdle by a dogged O’Dempsey’s side inspired by Micheal and Matthew Finlay.

With a minute on the clock Dan Dunne opened the St Joseph’s account with what would be his first of three measured placed balls from the deck. His first with a minute elapsed from thirty metres sailed between the posts, as did the two that followed as Joseph’s looked to punish O’Dempseys' early indiscipline.

O’Dempsey’s didn’t take long to open their account with Matthew Finlay measuring his effort perfectly to set them underway with nine minutes played.

Despite the game being a mere thirteen minutes old, a key moment in the game unravelled as linesman, John Flynn, informed referee, Seamus Mulhare, of an off-the-ball incident and St Joseph’s Colin Campion was brandished a straight red card.

Now with an uphill battle ahead of the Kellyville outfit, O’Dempsey’s made that hill all the steeper a minute later with Micheal Finlay’s first of the day to cut the gap to the minimum.

Looking to put his recent transfer saga behind him, Brian Daly notched his first point for his new club, in his first game, to leave two points between the teams with just over a quarter of an hour played.

Two minutes later, Dan Dunne stepped up to convert his fourth free of the half to give Joseph’s a three point cushion entering the final ten minutes of the half.

O’Dempsey’s finally began to take advantage of their numerical advantage in the final ten minutes as Robbie Kehoe’s booming effort from the outside of the boot inspired Eugene Nolan to fire his second of the day, before Barry Kelly drew the half to a close with a measured point to leave the sides level at five points apiece going in at the interval.

St Joseph’s looked to have laid a marker from the throw-in with Matty Campion pointing inside thirty seconds, but O’Dempsey’s didn’t take long to reply as Matthew Finlay kicked his second of the day to level the sides once more.

O’Dempsey’s looked lively in the opening stages of the second half, but lacked composure in the final third as they shamelessly kicked four wides in the first six minutes of the half. Micheal Finlay broke that trend and looked to set another as the centre-forward pointed twice in quick succession as O’Dempsey’s took the lead.

With forty-one minutes on the clock, St Joseph’s were awarded a penalty following Dylan Doyle’s haul-down in the square. Brian Daly stepped up to the mark, but could only watch on as his blistering strike came back off the crossbar, before he was again denied seconds later as the recycled ball was carried off the line by the experienced Peter O’Leary.

O’Dempsey’s went on the attack and opened up a four point lead following points from Brian Nugget and Stephen O’Leary with twelve minutes to go, before Brendan Hickey reduced the margin to three a minute later.

With fifty-four minutes on the clock, Matthew Finlay played the ball forward to Micheal. He rounded his marker before cutting across the end-line, and as Aaron Cooney bore down on the attacker he intuitively squared the ball back to Matthew, who walked the ball into an empty net for a sensational goal.

St Joseph’s continued to battle in the final stages and tacked on the final three points through Daly and a Hickey brace, but it was too little, too late .

Main Man
When O’Dempsey’s looked for scores they turned to either Micheal or Matthew Finlay, and while both finished with handsome tallies, the former was at the centre of every attack for the Killenard men. Finished with four points as well as teeing up the goal for Matthew - a dynamic partnership that O’Dempsey’s will look to nurture.

Talking Point
For the majority of the League campaign St Joseph’s looked like the team to beat come Championship. A series of departures that includes some of their stand-out performers from the league, namely Mick Keogh, Adam Campion and Danny Hickey to Philadelphia for the summer has dented their rhythm and they’ll be hoping to see them return in time to play some part in their Championship campaign.

Turning Point
Colin Campion’s dismissal in the thirteenth minute was undoubtedly the turning point in the game. Leading 0-3 to 0-1 with all the momentum flowing in the St Joseph’s direction, Campion was brandished a straight red card following an off-the-ball incident over on the sideline of the terrace side.