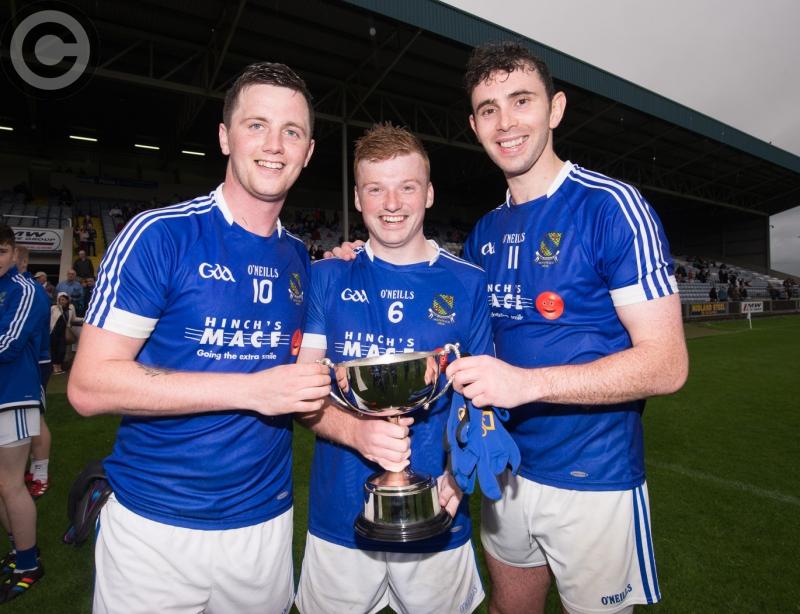 Mountmellick emerged four point victors over Courtwood to be crowned Division 2 Champions in the curtain-raiser in O’Moore Park on Sunday evening.

Spectators in O’Moore Park were still ironing out their programmes when Mark Dowling registered the first point of the day after less than forty seconds for the Mountmellick men. Courtwood didn't take long to reply, and County star Niall Donoher levelled the proceedings with a sweetly-struck point from range.

Having watched Jason Caffrey’s goal-chance trail wide two minutes earlier, Mountmellick edged themselves back into the lead thanks to Eoin George’s point from distance. Caffrey atoned for his earlier opportunity with a short-range free to put two between the sides, and Colm Coss’ first of the day extended their lead to three as Courtwood struggled to match the tempo.

With Courtwood failing to build any momentum going forward, Mountmellick eased into a five point lead following a David Kelly point, and a long-range gem from Coss as the game passed the quarter of an hour mark.

Full-forward, Niall Mullen, opened his account for the day as he cleverly made space for the shot before calmly extending their lead to six, but Colm Coss’ third of the half arrived two minutes later to put a seven point margin between the sides.

Having gone twenty-five minutes since their last score, Courtwood notched two in the space of a minute through Brian Hogan and Alan Kinsella to give them a much-needed boost before half-time. Hogan then brought the half to a close with a converted free in the first minute of injury-time as they went in four points down at the interval.

Courtwood’s chances of picking up where they left off received a huge blow just thirty seconds after the restart as Mark O’Halloran received the first black card of the game, yet, Courtwood claimed the first point of the half a minute later through a Matt Kelly free.

Five minutes later, Kelly slotted his second free in quick succession to close the gap to two points. Nineteen minutes since their last score, Mountmellick landed two inside a minute with Niall Mullen hitting a brace to restore a four point margin.

Courtwood’s chances received a blow when they were reduced to fourteen men shortly, with Michael O’Connell issued a second yellow for a high-tackle. Mountmellick capitalised with a superbly worked team-goal four minutes later, as Mullen and Karl Donoher combined to leave substitute, Michael Hyland, to palm into an open net for the first goal of the day.

Mountmellick too were reduced to fourteen men four minutes from time as Mark Dowling received a black card for a trip, and as he was already on a yellow was given his marching orders. Courtwood brought the game to a close with Alan Kinsella’s third, but Mountmellick deservedly held out for the win.