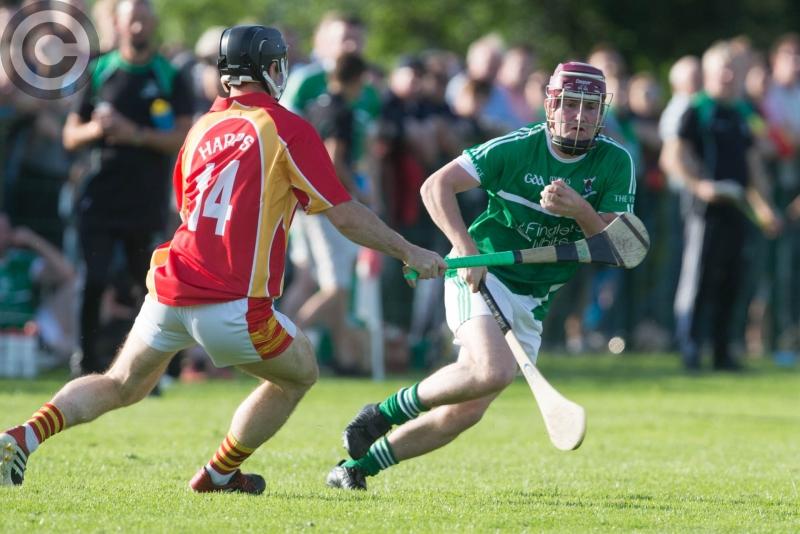 Cathal C Fennell, Rosenallis takes on John Brophy, The Harps in the SHC 'A' at Mountrath. Picture: Alf Harvey/HRPhoto.ie

Last year’s relegated side from the Senior ‘A’ Hurling Championship, The Harps, went into their first round clash with newly promoted side Rosenallis as overwhelming favourites, not only for the win, but for the championship in general.

However, Rosenallis put in a massive performance to put themselves straight into the next round. The Harps must now enter the losers side, and know that it will be straight knock out for them from here on out.

Rosenallis’s goalkeeper Stephen Kelly kicked off proceedings in Mountrath with a point from a placed ball. The Harps bounced back to take the lead with scores from corner forward Eoin Clancy and midfielder Michael Lanigan.

Making his first competitive start since returning from injury, John Lennon levelled the game with a fine catch, turn and point. Michael Lanigan and Walter Murphy swapped frees to keep the teams level eight minutes in.

Rosenallis then went close to goal after Ciaran White won his own puck out and drove it up field. Ronan Murray got on the end of it, went through on goal, but the post denied him from a tough angle. Patrick Keating pointed the rebound, but The Harps replied through Michael Lanigan.

The Harps were on the back foot for a decent period of the half, but were holding firm. Their goalkeeper Peter Walsh was also forced into making a terrific save from Fiachra C Fennell.

However, Rosenallis were pushing for a goal, and got it through Ronan Murray who was atoning for his earlier miss. The number eleven made a bit of room for himself, and fired one into the top corner, giving Peter Walsh no chance.

The Harps responded characteristically, firing off four unanswered points to regain the lead. The points came from the hurls of Lanigan (twice), a superb Richard Saunders point after a lovely catch and another nice Eoin Clancy point. John Lennon responded with a point, but The Harps were back in the ascendency, and rattled the net on the stroke of half-time.

Pat Walshe played a lovely ball into John Brophy, who hit one low and hard into the corner, and The Harps lead by three at the break.

The sides swapped scores in the opening stages of the second period through Joseph Keating and Richard Saunders, before Rosenallis levelled the game again with three points on the spin. The points came through Fiachra Fennell and two by Patrick Keating.

The teams traded points twice, before Rosenallis drove on and popped over the next four points. Two came from the magnificent Ronan Murray, with a Patrick Keating free and a Fiachra Fennell point following.

The Harps reduced the gap to one with three minutes of normal time remaining thanks to Padraig Delaney and Lanigan. However, John Lennon replied for Rosenallis, and the time was running against The Harps.

The Harps could only muster a Lanigan free in injury time, and Rosenallis picked up an unbelievable opening round victory.