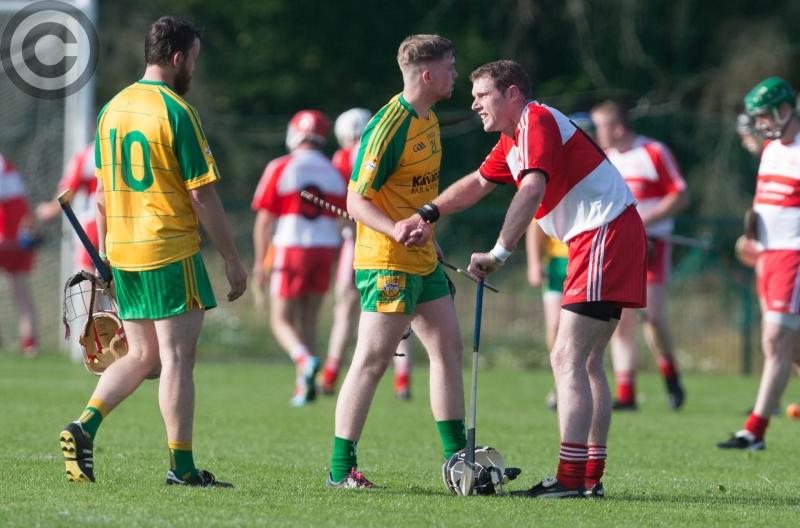 After finding their first year in Senior ‘B’ Hurling tough and getting relegated, despite an amalgamation with Kyle, Trumera returned to the Intermediate competition and began well with a two point victory over Park-Ratheniska.

Trumera’s Cathal Brophy opened the scoring, before Park-Ratheniska replied with a John Holohan free. Trumera responded a minute later with a Dylan Lalor free. Both sides struggled for scores throughout as they both set up with numerous sweepers at either end.

Points from Joey Coogan and Cathal Brophy had Trumera leading by two points eighteen minutes in. Park-Ratheniska’s Conor Brennan and Trumera’s Dylan Lalor swapped points before Park-Ratheniska finished the half the stronger to level proceedings at the interval.

John Holohan fired over a free, before Trumera nearly found the net. Dylan Lalor’s free dropped short of the goal, Shane Murphy collected the ball and went for goal, but fortunately Park-Ratheniska had a defender on the line to clear away to safety.

Park-Ratheniska’s corner forward Conor Brennan hit the leveller a minute before half-time, and it was a low-scoring four points apiece on the scoreboard.

Trumera went back ahead a minute into the second half through a Coogan point, and Dylan Lalor put them two ahead a minute later. John Holohan responded through a placed ball, but Trumera again hit two points on the trot through Dylan Lalor (one free) to push further ahead.

John Holohan put over another free for Park-Ratheniska, before they were reduced to fourteen men after Brendan Greene received his marching orders for an off the ball incident. Holohan was keeping Park-Ratheniska in it with another point, this time from play. Lalor responded with a free, but points from James Langton and Brennan reduced the gap back to two.

Trumera’s Joey Coogan and Park-Ratheniska’s James Kerwin traded points, before Lalor landed a free in injury-time to seal their place in the next round.