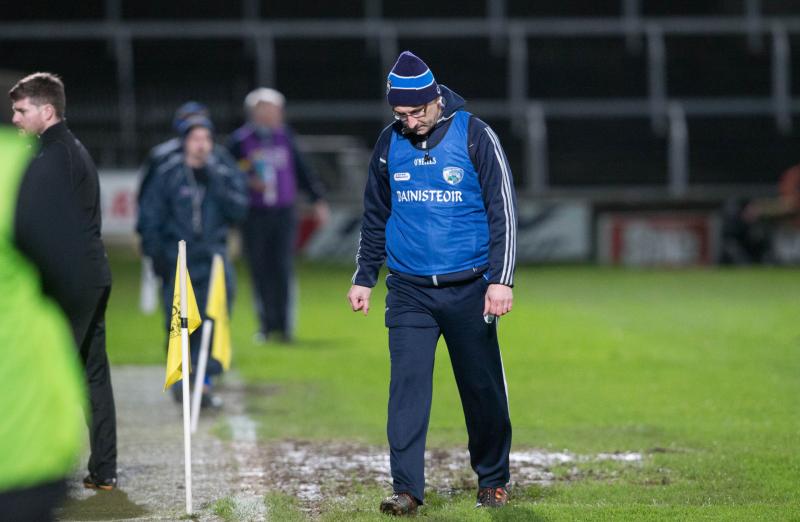 Delegates at Monday night's Laois County Board meeting took aim at Peter Creedon after a disastrous year for the county's senior football team.

The players did not escape censure either, with some delegates laying the blame for the year at their door, with on delegate also alleging four of the starting team were drinking prior to games.

A wide-ranging debate on the 2017 season took place at the Laois GAA offices in Parkside, and it was kicked off by Arles-Kilcruise delegate JJ Conway, who spoke of his disappointment that men from outside the county had been drafted in to act as selectors.

He also criticized the preparation of the team. "It was a disastrous year. Against Kildare, if we had never brought the team together for the seven months before the game, left them to their clubs and brought them together the week before, they would have done as well. There was no passion in our team this year."

St Joseph's delegate Michael Moore then initially proposed that Creedon be removed from the role, but when it was pointed out that he was only appointed on a one-year term, and was not technically currently in the role, he then proposed that his term not be renewed.

Portarlington's Niall Slevin informed the meeting that Creedon's performance had been discussed at committee level in his club, and they were not in favour of him returning either. "I'm speaking on behalf of Portarlington GAA Club, we had a meeting after the Kildare game and we are in no way in favour of him remaining on as manager.

"To think of bringing him back after this year should not be on the cards."

Emo delegate, and former Laois footballer and U-21 manager Mick Lawlor, also felt Creedon could not be allowed to continue. "Last year we played the All-Ireland champions down in Kilkenny, and after 15 minutes we were down to 14 men, John O'Loughlin was sent off, but we could still compete and put up a serious effort.

"To watch what happened this year, and to be even considering holding on to that man is suicidal*.

"From what I saw this year, to hold on to that man, you could be putting Laois football back five or six years."

The Heath's Philip Keane wanted answers from the players. "What is the situation with the players? Do they feel they didn't perform to the level they can? It's grand saying we blame the manager, he picks the team, but the players themselves, do they feel they played as well as they could have, or that they were below par in some of the matches, and they should shoulder some of the blame?"

He added. "I don't think we should be rushing to get rid of a manager until the players own up to how they felt the year went. If five players put their hands up and say I didn't go as well as I should, then you can't hold the manager responsible for that."

His sentiments were echoed by Timahoe's Willie Ramsbottom. "I think a few of the players need to look into their hearts" noted Ramsbottom.

"You can hang it on the manager, everybody makes mistakes and everyone in this room has made mistakes, but when you put on a jersey you're supposed to go out and give every drop of sweat you can for an honest effort, and our lads this year did not give an honest effort. The players have to stand up and be counted, and be honest with themselves."

Crettyard's John Burke also criticised the players, alleging some of them had been drinking in the run up to games. "Here is the place for an honest discussion, we're all adults here.

"I'd just like to make the point, and I'll ask the question here; is it the manager's fault that at least four of our senior football players congregate for drinking sessions? Everyone in the street is talking about that, is that the senior manager's fault? Or is it the players fault? Four of our starting team were involved in that."

Chairman Gerry Kavanagh responded that there is a "collective responsibility" on all interested parties.

Willie Ramsbottom agreed. "I agree with you 100% John, I said it before myself a year and half ago and I was told I was washing dirty linen."

To a query on whether this was the night before a game, Burke said it was "days before".

Stradbally's Eamon Delaney said anyone who is aware of county players allegedly acting in such a manner should make sure the information is passed on to Peter Creedon, or confront the players themselves. "If I was aware of it, I'd be letting them know. If anyone knew and did nothing about it, they are partly responsible as well.

"It's grand and fine to blame players, and they absolutely should apply themselves and give themselves every chance. But if a person here is out socially and you see them (county players), if it meant a thing at all to you, to be paying your €30 going into O'Moore Park or wherever to go and see them, the very least you could say, in a polite and manly way, is that 'you should be doing better than that.' And they should be doing better than that."

While the mood in the room would suggest that Creedon lacks support, Chairman Gerry Kavanagh informed the meeting that they would first have to meet the players representatives before reporting back to delegates.

That meeting with the players could potentially take place this week.

* Emo delegate Mick Lawlor has subsequently contacted the Leinster Express to apologise for his use of the word 'suicidal', and he regrets using that particular term.