LAOIS SHC PREVIEW - Roll up, roll up for the greatest show in Laois GAA 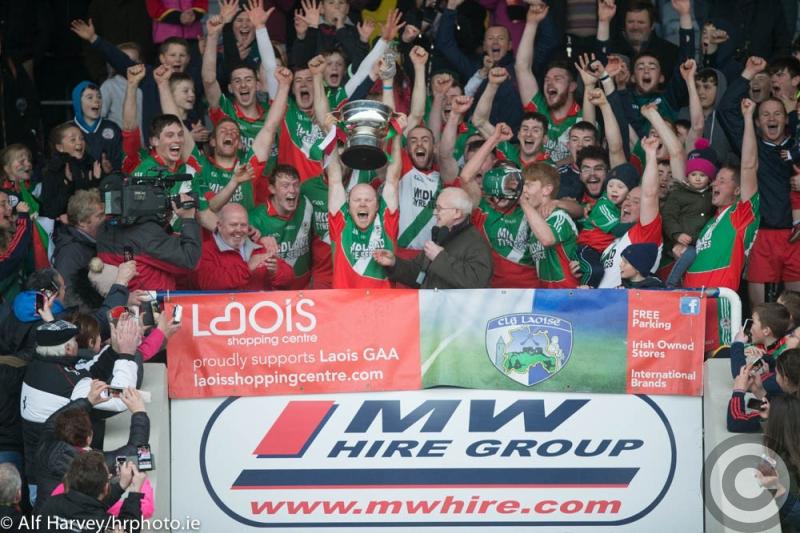 The greatest show in Laois hurling kicks off again this weekend, as the senior championship takes centre stage for the coming months.

After a thoroughly enthralling SHC last year, it's safe to say that the latest incarnation has a lot to live up to. We'll hardly be lucky enough to see another final that ends at 2-26 apiece, but we can live in hope.

For the first time since their amalgamation, Borris-Kilcotton now enter the competition as reigning champions. It has a lovely ring to it, but it brings with it more pressure and challenges.

The hardest part of being successful is to continue being successful. What worked for them last year won't necessarily work this year, and already they are suffering through a handful of injury concerns.

Paddy Whelan is out for the year after a serious hamstring tear playing for Laois, while Joe Campion has been under the knife to have a hernia removed. Danny Fitzpatrick (shoulder) and Stephen Phelan (ankle) are also on the treatment table, and that's before you get to PJ Scully.

He played through the pain barrier last year with a serious tear in his quad muscle, and the result of that is he hasn't played a full game of hurling yet in 2017. He featured as a sub in the league semi-final, but is by no means match fit.

Neil Foyle, who had a fine year for Laois, and Aaron Dunphy will need to step up that bit more if Scully's injury woes continue. With Colm Stapleton also in the America at present, manager Ronan Kelly has a lot on his hands in his first year in charge.

The side they beat in last year's final, Rathdowney-Errill, look to be building up nicely ahead of the championship. They were not particularly impressive in the league, but that won't bother them too much.

They have Mark Kavanagh back from injury, after he missed the 2016 SHC with a cruciate ligament tear. He will add a lot of potency to their attack, which wasn't exactly blunt already. Ross King, Tadgh Dowling and John Purcell are not what you'd call shy in front of goal.

Enda Meagher is still knocking around as well, a great player to have at their disposal, while Paddy McCane has shown flashes of promise too.

What Rathdowney-Errill have going in their favour is that their key players are all in good form. Ross King and Paddy Purcell were outstanding for Laois this year, Mark Kavanagh was arguably Laois' best forward against Dublin, and Eric Killeen and Jack Kelly will have greatly benefitted from a year with the Laois seniors.

Liam O'Connell was their sixth player in with the county, and they will be hoping he can stay fit after struggling with injury and fitness at times this year.

All of those names are without mentioning the likes of Brian Campion, Joe Fitzpatrick and Shane Dollard, battled hardened veterans who know how to win championships. With no injury concerns to trouble them, they look very well placed as things stand.

Hot on their heels are a Camross team fresh from a dominant display in the ACHL Division 1 final. Like Rathdowney-Errill, Camross have no real injury concerns, with only Malvin Moloney missing from last year's team. Martin Burke will likely fill in for him at full-back, and after that Arien Delaney likes to keep us all guessing.

Camross always have two things going in their favour - Zane Keenan, and their unpredictability. Keenan is probably the most influential hurler in the county, and could easily line out anywhere from midfield forward. Dwane Palmer was corner-back in the league final, but has been played at full-forward in the past, and is good enough to line out anywhere.

The only real staples in the team are Tadhg Doran in goal, Gearoid Burke at centre-back and Tomás Burke at centre-forward, and the there is degree of flexability after that. They have no glaring weaknesses in their arsenal, given they have size, strength, speed, youth and experience blended throughout the panel.

After a run of three final appearance in a row, they lost in last year's semi-final, after a replay. This is Arien Delaney's fifth year at the helm, opting to stay on for a year and turn down the chance to manage the Laois minors. There is a definite sense of unfinished business surrounding Camross, and with that bearing down on them, they will have to be wary of it bringing too much pressure.

For large parts of the start of this year, Clough-Ballacolla looked like a team ready to reclaim the title they last won in 2015. They were the form team in the league, but then lost their final league game to Camross, before being annihilated by the same opposition in the final.

The loss of Picky Maher is a massive blow to their hopes, and it was he who lead their revival in the 2015 final against Camross. Their forward line, while still good, does not look as threatening in his absence, especially as Willie Dunphy will be coming back after over a month out with a hand injury.

The experiment of Willie Hyland at centre-back seemed to work for much of the league, but it didn't in the league final. As they look set to be short of firepower in Picky Maher's absence, there is definitely a case to be made for pushing him back into the forward line.

With Darren Maher at wing-forward, Mick McEvoy at full-back and Willie Hyland at centre-back, there would certainly seem to be moves that could be made to accommodate all three men in more comfortable surrounds. Whether they deem those moves necessary remains to be seen.

With those four clubs listed above probably constituting the realistic contenders for the SHC title this year, the focus now switches to the chasing pack.

Abbeyleix have been doing great work at underage level for a long time now, but they have been left to rue a number of close calls against teams in the top tier of senior hurling. They have given Rathdowney-Errill a run for their money on a few occasions, and probably should have beaten Borris-Kilcotton in the first round last year.

With the rate their production lines are working at, a senior title will certainly be in the offing in the years ahead, but it seems unlikely this year. Rather, what they need to achieve in the short term is at least one win over any of the four teams mentioned ahead of them in this article. Close calls and moral victories offer nothing to an ambitious club, and they are most certainly that.

For the neutrals in the county, the emergence of another serious contender for senior honours would add another layer of intrigue to proceedings, but they have to prove they have the ability to grind out one of those wins first.

Behind them, Ballinakill Gaels were the only side to beat Borris-Kilcotton in the championship last year, but they have been having a disappointing season to date.

Relegated from ACHL Division 1 and parting ways with their manager a few weeks out from the championship don't exactly inspire confidence. When you add in Cha Dwyer's decision to go travelling, you start to have concerns over their prospects, although Cha was injured anyway.

Getting Cha back fit and available is crucial, but getting some positivity into the camp is just as important after the year so far. That will be easier said than done.

Castletown, perhaps like Abbeyleix in many respects, are a club who have done a lot of things right at juvenile level in recent years, and they are an exciting young team, packed with potential. They earned their place in the SHC the hard way, with a last-minute winner against Ballyfin Gaels last year in the SHC 'A' final, and their first job is to avoid an immediate return.

At present, the major candidates for relegation appear to be Portlaoise, who will be without Tommy Fitzgerald for the foreseeable future. Tony Byrne is also injured and they have a handful of other players missing through travel or exams, so a tough campaign awaits for Cheddar Plunkett. Guiding an inexperienced Portlaoise team to safety would be a fine achievement for the former Laois boss, but it won't be easy.

So, when it all comes down to it, who is going to win it? Who are we going to put our neck on the line for and back to raise the Bob O'Keeffe Cup? On the face of it, Camross look really well placed, particularly after their league win. With Arien Delaney giving it another year, and the players determined to justify that decision, it makes them a formidable outfit.

Our worry in that regard is they are putting a huge amount of pressure on themselves, and that could prove too much in the long run. Borris-Kilcotton and Clough-Ballacolla have injury worries, which leaves us at Rathdowney-Errill's door.

With key players in superb form, younger players that bit more battle hardened, and a well-balanced starting team, with their county players back they should improve as the competition progresses. They might well lose to Camross in the opening round, but expect them to be in the mix at the end.

PLAYER OF THE YEAR - Zane Keenan