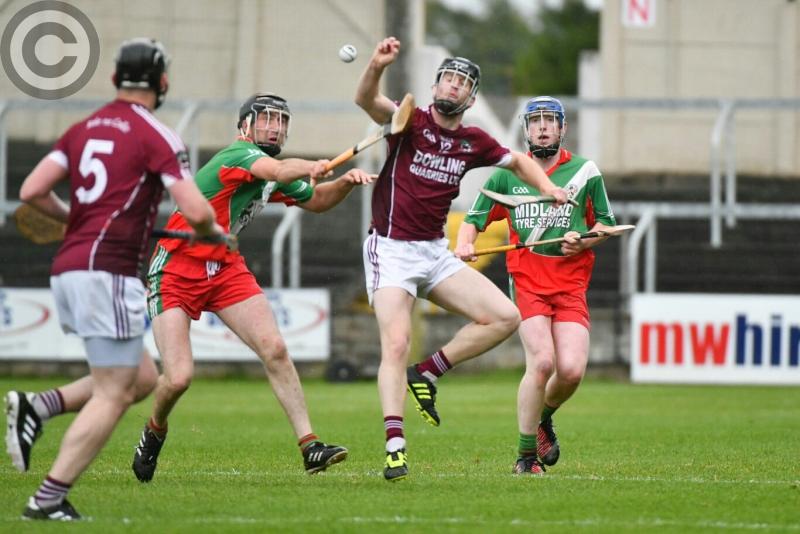 Borris-Kilcotton get the defence of their Laois SHC title off to a winning start, as they edged out Ballinakill Gaels by three points in O'Moore Park.

Cha Dwyer's return from Croatia couldn't inspire Ballinakill Gaels to victory, as despite a strong effort on their part, they came up just short.

Borris-Kilcotton could hardly have asked for a better start, as they had a goal inside a minute. Exactly who scored it is a matter of some debate however, as the chance came about when Paul Simms saw the ball slip from his grasp on the goal line, and a handful of players raced in to try and force it over the line, with a green flag eventually being raised.

Ballinakill Gaels responded well to the setback, and Eamon Jackman opened their account in the fourth minute. The same player then stroked over a free soon after, before he landed another placed ball from way out on the sideline to level the scores at 1-0 to 0-3 with nine minutes played.

Jackman was the form player for Ballinakill Gaels at this stage and he almost had a goal after that. He raced through the Borris-Kilcotton defence, lost his man 14 yards out and shot off the hurl, but Eoin Fleming batted it away, and Cha Dwyer missed the rebound.

TJ Lalor then pushed Ballinakill Gaels ahead for the first time with a fine score from play, and Jackman followed that up with a brace of frees, making it six in a row for the men in maroon.

PJ Scully finally ended the Borris-Kilcotton scoring drought when he landed a free in the 18th minute, and that really seemed to give the reigning champions a lift. Aaron Dunphy pointed from play and then Scully added another free before landing a peach of a score from distance to see his team back in the lead.

As ever, it was Eamon Jackman who responded for Ballinakill Gaels, this time from play, taking his tally for the half to 0-6. A Scully free quickly canceled that out, and both teams managed just one more point before half time.

Cha Dwyer hit the target for Ballinakill Gaels, but another Scully free had Borris-Kilcotton ahead by the minimum, 1-6 to 0-8, as the teams headed for the dressing room.

Whatever Ronan Kelly said to the Borris-Kilcotton team at half time it took immediate effect, as PJ Scully added a point for them within seconds of the throw in. Aaron Dunphy fired over another moments later, and Borris-Kilcotton now found themselves three clear once again.

Borris-Kilcotton shaded the next ten minutes or so, and looked to be cruising when two PJ Scully points had them five clear, 1-13 to 0-11.

Just when it looked like they were in the clear though, Cha Dwyer found the bottom corner with a 21 yard free, and it was game-on again. That set up a tense closing ten minutes, as Ballinakill looked to chip away at the lead, Brian O'Mara getting them within one with three minutes to go.

However, that was as close as they got, as late points from Neil Foyle and Jim Fitzpatrick saw Borris-Kilcotton to a three point win.