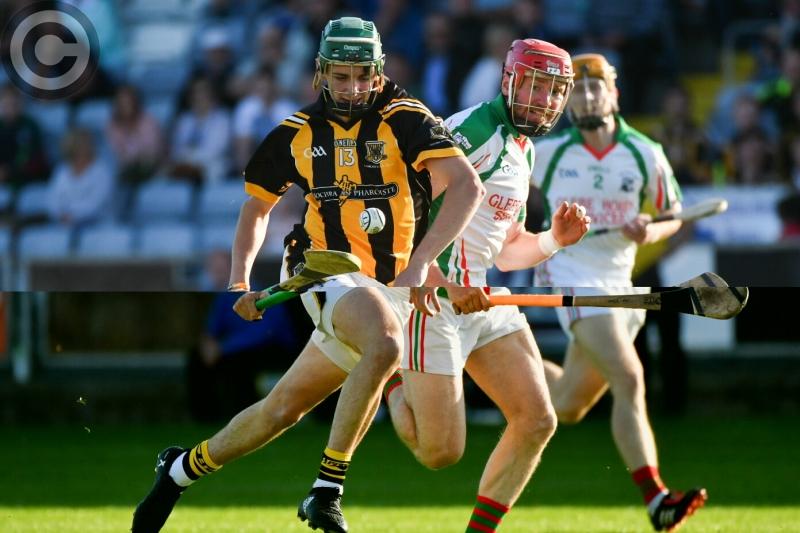 Mark Dowling on the attack for Camross. Pic: Denis Byrne.

Camross edged out Rathdowney-Errill by just three points in this SHC Round 1 clash on Sunday night.

Zane Keenan hit 0-11 as the recently crowned ACHL Division 1 champions just about had enough to see off Rathdowney-Errill. A purple-patch midway through the second half was the key, as they opened up a six point lead which eventually proved to much for their opponents.

Paddy McCane opened the scoring with less than a minute on the clock, making space and firing over from around 30 yards out. Camross, undoubtedly the form team coming into the game, quickly responded through Zane Keenan, as he threaded a shot between the posts from a tight angle.

In a madcap moment of action after that, Camross had the opening goal of the game. Excellent work from Mark Dowling saw him offload to Keenan in the penalty area, but Keenan's shot crashed off the post and rebounded across goal. In the ensuing melee for possession, Dowling reclaimed the ball and shot past Noel Brennan in the Rathdowney-Errill goal.

Ciaran Collier chipped in with a point soon after and Camross suddenly found themselves four clear, with the outlook not too good for Rathdowney-Errill. This is where experience counts, and Rathdowney-Errill never panicked, instead putting a run of scores together to get themselves back in the hunt.

James Ryan got the first of them, and then Paddy Purcell and Ross King (free) followed up to leave one point in it. Tomas Burke replied for Camross after Zane Keenan picked him out with a wonderful pass, but another three-point run from Rathdowney-Errill put them in front. King launced over a free, Mark Kavanagh pointed a brilliant sideline cut and Paddy Purcell got his second to complete their recovery.

Ciaran Collier, Zane Keenan (free) and Tomas Burke quickly wrestled back control for Camross though, as they were probably shading things at this stage. They looked the more dangerous side every time they attacked, and they went three clear with two minutes of the half to go, 1-9 to 0-9.

Rathdowney-Errill enjoyed their best spell of the half after that though, as two brilliant points from James Ryan, an even better effort from Paddy McCane and one from David Poynton saw them lead by the minimum at half time - 0-13 to 1-9 the score.

Within moments of the restart, Gearoid Burke landed a huge free from well inside the Camross half to draw them level, but Mark Kavanagh was quick to restore the Rathdowney-Errill advantage. Ross King them saw his scoring touch desert him, as he missed two scoreable frees to hand the initiative back to Camross.

Zane Keenan (free) and Andrew Collier hit the target to see them pop their noses in front, but a wonderful point from Mark Kavanagh briefly restored parity.

After that, Camross took control of the game, as Rathdowney-Errill's challenged seemed to wilt. Zane Keenan put his side back front with a point from play, before rattling off four unanswered points from frees as Camross appeared to have all but wrapped up the win.

Rathdowney-Errill couldn't get anything going in attack, with Paddy Purcell's scoring touch deserting him. They had gone 20 minutes without a score when they finally sprung to life, as the aforementioned Purcell picked up the rebound from a Ross King shot and found the bottom corner.

Mark Kavanagh added a free soon after to get the gap down to two points, but that was as good as it got for Rathdowney-Errill. Zane Keenan used all his experience to twice win possession and point for Camross, but still there was late drama.

Kavanagh pointed another free to get the deficit to three, and then Paddy McCane saw his powerful shot come thundering back off the crossbar with almost the last puck of the game, as Camross held on for the opening round win.