Relegation looms for Laois Ladies after heavy loss to Cavan 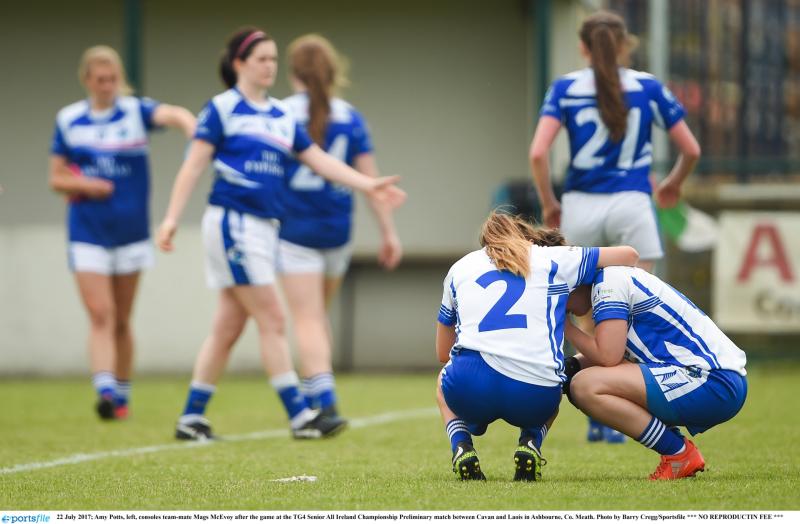 The scoring power of Aisling Doonan and Claragh O’Reilly down the spine of the Cavan attack proved too much for Laois to handle last Saturday afternoon in Ashbourne.

Kevin Doogue's side crashed out of the TG4 All-Ireland Ladies football championship, leaving them almost certainly facing the prospect of relegation to the intermediate ranks in 2018.

“We have no excuses today” said Doogue afterwards. “The heat was the same for both teams and they were just a little bit better on the day. When we went down to fourteen we performed very well as well, we pushed on, but they’re a good side, players like Donna English and Aisling Doonan are just very good players”.

Doogue rejected the suggestion that the announcement during the week regarding the relegation structure was a distraction for his panel, and the solid start made by his team certainly backed up that assertion, with Clare Conlon finding the mark after just fifteen seconds.

Cavan responded with the next three scores, the third of which was a goal from Aishling Sheridan, however Laois continued to work hard into the breeze and points from Rachel Williams and Conlon kept them in contention.

The Ulster county dominated possession but with their wide count mounting, Laois were still right in the game by the twenty-minute mark, trailing by just five points with the wind set to favour them shortly. However, the rest of the first half proved incredibly costly as Cavan fired over six points before the break to rack up a 1-13 to 0-6 interval lead.

Within three minutes of the restart, the contest was effectively ended. Cavan broke out of their own back line and drove at the Laois defence, creating an overlap. Once the ball found its way to Aisling Doonan, the outcome was inevitable and so it proved as her low shot crashed into the net off the post to extend the lead further.

By the 40th minute four of the starting Laois forward line had been replaced as Doogue attempted to find the formula to unlock the Cavan defence, but while his defensive unit held firm for the remainder of the contest – even after full back Jenny McEvoy was given ten minutes in the sin bin for a foul close to goal – they couldn’t make any impression until the closing minutes, when only the winning margin was in doubt.

Caoimhe Simms reduced the gap to ten points when she found the Cavan net close to the hour mark, while Emma Lawlor came within inches of adding another when her late effort slammed off the post and broke wide.

By then, however, Cavan’s thoughts had turned to their clash with Waterford this weekend, while Laois are now in limbo as they wait to see if they’ll get a chance to avoid relegation to the second tier of Ladies football competition.