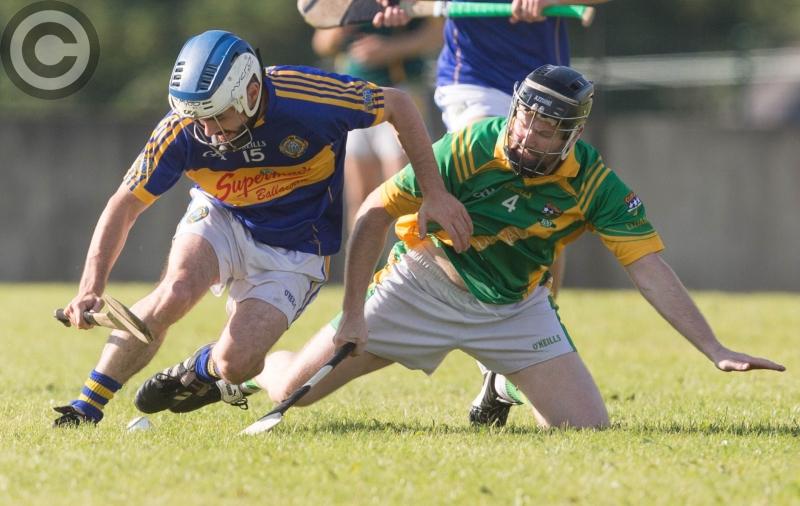 Slieve Bloom returned to the Laois IHC on Saturday evening for the first time since 1985, as they took on Rathdowney-Errill in Borris-in-Ossory.

Conditions were perfect for hurling and even though Slieve-Bloom lost by seven points, they were dominant for long periods of the game. Last year Slieve-Bloom lost to the same opposition in the first round of the Junior ‘A’ Championship but turned this around in the final to win comfortably.

Rathdowney-Errill dominated the first ten minutes of this game as they went 1-6 to 0-2 up after only 15 minutes of play. Centre forward Eoin Bourke hit 1-3 during their period dominance while Enda Meaghar chipped in for two well taken points.

However, it was Slieve-Bloom who then took over as Robbie Burke, Darragh Delaney and John Paul Campion all added points. Rathdowney-Errill failed to score for 15 minutes in the first half and frees from Gavin Conroy for Slieve-Bloom meant the sides went in level at the break, 1-6 to 0-9.

Rathdowney-Errill got the better start to the second half as Shane Madden and Eoin Bourke found the target with further points. Slieve-Bloom kept in touch through frees from Gavin Conroy to leave the score 1-9 to 0-11 after 35 minutes.

However Rathdowney Errill then struck for goal as substitute Brian Bowe’s shot from 30 yards dropped past Niall Higgins in the goal. Rathdowney-Errill continued to keep the scoreboard ticking over as Enda Meaghar and Brian Bowe added points along with further Eoin Bourke frees.

Despite the best efforts from Gavin Conroy who added a point and further frees to his tally it was too late as the goals proved to be the difference at the end of the game.

Brian Bowe finished the game with 1-3 after being introduced as Slieve-Bloom must now win their next outing to secure a quarter-final place.

The opening round of the Laois IHC came to a conclusion this weekend with three games being played over the course of the weekend.

The first game was the meeting of Portlaoise and Camross on Friday evening. Camross were victorious in this game as they came out eight point winners on a scoreline of 2-11 to 0-9.

Weather conditions for the game were terrible as heavy rainfall throughout the day made it difficult for both teams. Oisin Bennett goaled for Camross in the early stages and the dominated after this.

Portlaoise goalie Derek Delaney pulled off some excellent saves to keep Portlaoise in the game. Tadgh Drennan was best for Camross, while for Portlaoise Colm Gleeson lead the way with 0-6 to his name.

On Sunday evening, the other game of the weekend took place in Durrow as Clonad took on a strong Clough Ballacolla team.
Clonad went in leading at the break 1-7 to 0-6 thanks to a Bob Delaney goal. However, it was Clough Ballacolla who took control in the second half as they hit an impressive 1-11 compared to Clonad’s three points.

With Rathdowney-Errill claiming an eight point win over Slieve Bloom, that capped off Round 1, which started the week before when Trumera edged out Park-Ratheniska.

For a full list of all Round 2 games, see HERE