LAOIS SHC ROUND 1 - Clough-Ballacolla too strong for Portlaoise 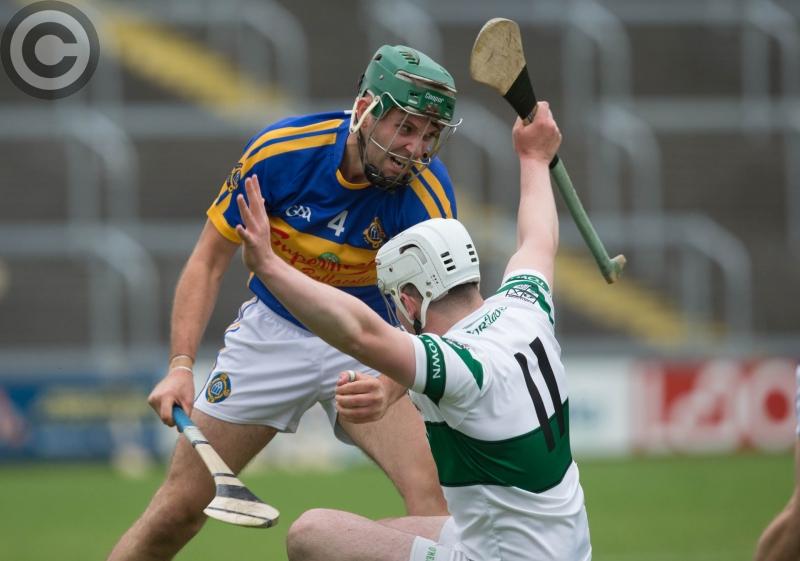 Clough-Ballacolla progress through to the next round of the Laois SHC following a nine point dismissal of Portlaoise in second of Saturday’s games in O’Moore Park.

While the curtain-raiser on Saturday evening between Abbeyleix and Castletown proved to be a classic shoot-out, this game never really came to life. Clough-Ballacolla didn’t show their usual blend of stylish hurling with fluent pace, and Portlaoise’s forwards failed to click as a unit.

Missing Tommy Fitzgerald and Seanie Culleton from that forward line due to injury, as well as losing their talisman in Cahir Healy to a serious looking knee injury after just ten minutes, it was a huge blow to Portlaoise’s chances from the outset.

Clough-Ballacolla opened the scoring with two minutes on the clock when Willie Dunphy and Shane Hanlon combined to allow the latter to register the first point of the day.

Both sides struggled to gain a foothold in the early stages, with almost ten minutes passing before the next score would arrive through a Cian Taylor free to level the sides.

A brace of frees from Willie Hyland followed to edge Ballacolla into the lead once again, but that was quickly pulled back to the minimum through Ciaran McEvoy’s huge point from his own sixty-five with just over a quarter of an hour played.

Lee Cleere restored Ballacolla’s two point advantage with a super score on the run, before Willie Dunphy opened his account to put three between the sides with twenty-three minutes on the clock.

Taylor responded with a free to keep the Town in touch, but the game’s first goal arrived a minute later. Willie Hyland picked up the ball and made a beeline for the Portlaoise goals before blasting into the roof of the net for a green flag.

The ever-present Canice Coonan and Taylor exchanged braces in the final minutes of the half to see Clough-Ballacolla enter the dressing rooms 1-7 to 0-5 ahead.

Cian Taylor picked up where he left off with another brace of points this side of the half-time whistle, one from play and one free, followed by a single from Joe Phelan as Portlaoise were back to within five.

Willie Hyland rattled off another two points as he exchanged fire with Aaron Bergin and the industrious Dean Lynch, before Bergin landed his second in as many minutes to bring Portlaoise to within four with fifteen minutes left on the clock.

Robbie Phelan added his first shortly after, but Taylor was on hand to keep the deficit at four points - but not for too long.
Willie Dunphy, on his return from injury, put the result beyond Portlaoise in the forty-seventh minute as he fired 1-1 in a minute to push Ballacolla eight clear heading into the final ten minutes.

Willie Hyland and Joe Phelan exchanged points before Hyland shot another three, and Brian Corby a single as the game entered injury time. With the result beyond doubt for the previous ten minutes, if not more, Cian Taylor continued to burst forward at any opportunity like he had all day.

In the second minute of injury-time, Taylor picked up the ball on the sixty-five before heading straight for goal. Already with seven points to his name, Taylor stopped twenty-five metres out and unleashed a rocket past Danny Hanlon for what was the final action of the game as Ballacolla ran out nine point victors.