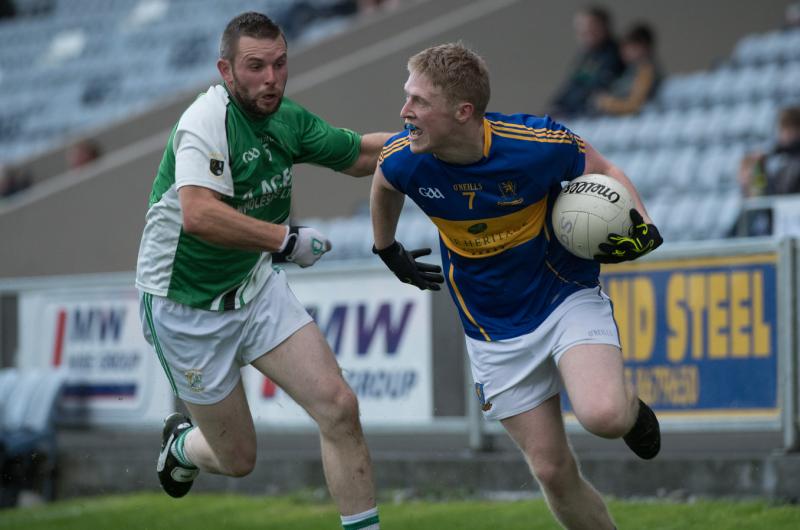 Barry Kelly on the attack for O'Dempsey's. Pic: Denis Byrne.

O’Dempsey’s returned to the senior championship ranks with a Division 1A league title under their belt, and duly opened their campaign with a fairly routine victory over a spirited Ballyfin Gaels team.

O’Dempsey’s got off to the dream start, as they found the Ballyfin Gaels net inside three minutes. Stephen O’Leary found space to run into the box, and hand passed to older brother Peter, who tapped home.

Matthew Finlay pointed the first two, the second one ably assisted by Robbie Kehoe with a wonderful cross field pass. Midfielder Eoin Finlay added another, before Matthew Finlay brought his tally to three with a fine outside-of-the-boot score.

Sean Moore replied with a free for Ballyfin Gaels, but O’Dempsey’s looked the far superior team, and points from Michael Finlay and Barry Kelly increased the margin to seven. Their dominance was mainly down to their ability to get under most of the breaking balls around the centre. Sean Moore’s frees kept Ballyfin Gaels in the contest, as he put over two frees as we approached the break.

O’Dempsey’s wing back Barry Kelly was provided with an excellent opportunity at goal, but Robbie Foran pulled off a spectacular save to deny him. Eugene Nolan ended the half with a point for O’Dempsey’s, as they went in with a six point cushion.

Ballyfin Gaels made one change at half-time, with the introduction of Laois minor midfielder Robert Tyrell from Camross coming in for corner back Barry Roche.

Stephen O’Leary notched the first point of the second half, after a sloppy hand pass out of defence by Darragh Connolly. Ballyfin Gaels had their first goal chance when Ricky Quillinan found space near the O’Dempsey’s goals, but he was twice denied on the line by full back Shane Nerney.

James Finn direct running was causing O’Dempsey’s problems, and he got his reward with a point. Quick thinking from the O’Leary brothers allowed Stephen to put over a simple point from a free. O’Dempsey’s were starting to find gaps in the Ballyfin Gaels defence as the game began to open up, and they put the game beyond doubt with a Matthew Finlay goal.

Two Stephen O’Leary points and one from midfielder Rory Bracken increased the gap out to thirteen. Ballyfin Gaels, to their credit, refused to throw in the towel, and they fired over the next five points.

James Moore put over the first, and they could have very easily followed that up with a goal, but Padraig Bannon saved Louis Duff’s effort. Darragh Connolly, Robert Tyrell, James Moore (free) and Sean Moore (free) put some respectability back into the score line.

Stephen O’Leary and Brian Nugent pointed for O’Dempsey’s, but Ballyfin Gaels grabbed the last two scores thanks to a Robert Tyrell point and a James Finn goal.