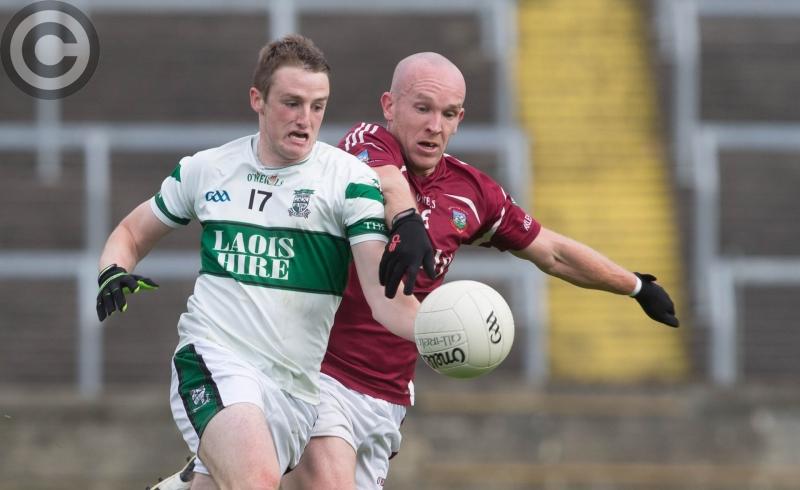 A clinical first half display was enough for Portlaoise to withstand a spirited second half one from Arles-Kilcruise, as last year's beaten finalists opened their campaign with a win.

Missing a handful of players from last year's team, Portlaoise were very impressive in the first half, but struggled at times in the second against a resurgent Arles-Kilcruise.

Any questions over whether Portlaoise would suffer as a result of the players they were missing were quickly dispelled, as they took control of proceedings early on.

Scott Lawless lofted over a free with a little over a minute gone, and Paul Cahillane added a 45 soon after. Arles-Kilcruise were struggling to get the ball forward, and they were hit with a major blow in the fifth minute.

Scott Lawless raced through on goal from the right wing, and despite being faced a very tight angle, managed to squeeze a shot past Ken Kealy in the Kilcruise goal. Gareth Dillon added a point after that, and Arles finally opened their account in the 14th minute, when Chris Conway curled over a free from 35 yards out.

David Conway followed that up with another point soon after as a glimmer of hope emerged for Kilcruise, but Portlaoise quickly swatted it away. Paul Cahillane jinked away from a couple of defenders to point from 20 yards out, and Benny Carroll then sprinted clear of the Arles defence before tucking a shot into the bottom corner.

Cahillane and Adrian Kelly soon followed that up with a point apiece, before goal number three was registered.  Brian McCormack's shot for a point was half-blocked down, falling into the arms of David Holland 20 yards out. He fed Scott Lawless in the penalty area, and he in turn passed the ball into the path of Paul Cahillane, who was left with a simple finish.

Now thirteen points clear with a little over 20 minutes played, this game was already more or less wrapped up. Kilcruise, being the team and club they are, weren't about to roll over, and Ross Munnelly and Chris Conway (free) pointed either side of an Adrian Kelly score.

Another run of Portlaoise scores pushed them into a fourteen point lead with the half almost complete, but there was some late joy for Kilcruise. A brilliant pass from Fran Egan found Dermot Nolan unmarked 10 yards out, and he slotted low past Graham Brody to leave it 3-10 to 1-5 in Portlaoise's favour at the interval.

Arles-Kilcruise needed to produce something special in the second half to have any hope of rescuing a result from this game, and to their credit they tried to produce. Ross Munnelly, who by his own standards had a quiet first half, was superb in the second.

He kicked the first three points after the restart to breathe some life into his team, with Portlaoise responding thanks to a Kieran Lillis effort from 14 yards out. Munnelly soon cancelled that out, and two Dermot Nolan points got Kilcruise to within six.

Kilcruise needed to move into another gear after that to seriously trouble Portlaoise, but they just couldn't chip away at the lead any more than that. Both teams traded a couple of points each as time ticked away, with Munnelly's last point, from a free injury time, the last action of the game.