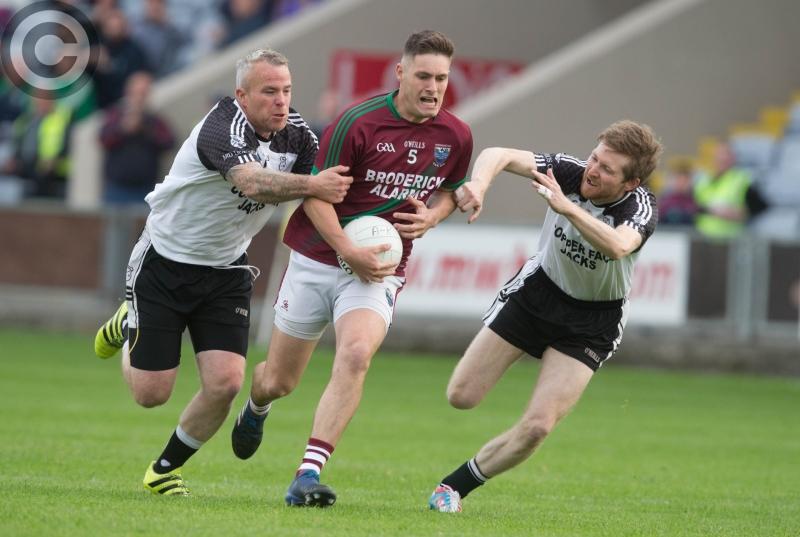 Portarlington and Arles-Killeen will head to a replay this Wednesday after a thrilling SFC Round 1 clash in O'Moore Park on Saturday night.

Jason Enright's 62nd minute free proved to be enough to rescue a draw for Arles-Killeen, who ended the game with 14 men after Shane Julian was sent off on two yellow cards. Port had a late chance to win it, but Brian McAuley's 45 dropped short.

Port came into the game as underdogs, but made an ideal start, with Colm Murphy's free giving them an early lead. Jonny Fullam then went racing through and pointed from 12 yards out, even though he had a sniff of a goal chance, and David Murphy put them three up soon after.

Arles-Killeen had been fairly anonymous up to this point, but they sprung to life in the eighth minute when Donie Kingston won the ball on the edge of the square, offloaded to the in-rushing Jason Enright, and he rattled the back of the net.

If that was to spark the expected onslaught from Arles-Killeen, it never materialised, as Portarlington steeled themselves after that setback and came back even stronger. Colm Murphy slotted over from 25 yards out, and then his older brother David took centre stage.

Playing at full-forward, he kicked three points in as many minutes to send his team four ahead, before a madcap 60 seconds of football. At one end, Jason Moore raced through on goal for Port, only to see his shot for goal superbly saved by Mick Leigh. Killeen broke forward from that and fashioned their own goal chance through Paul Kingston, only for him to be denied by Brian McAuley. Brother Donie won the rebound, and his powerful shot hit the post and bounced clear to cap a frantic period of play.

A well-worked attack from Port after that ended with Colm Murphy kicking his third of the half as they now lead 0-8 to 1-0, but Arles-Killeen started to flex their muscles after that.

Donie Kingston moved in to full-forward, and he soon set up Donie Brennan for their second goal. He quickly added two points, and the sides were now level at 2-2 to 0-8. Both teams managed another couple of points each before the break, leaving them deadlocked at the interval, 2-4 to 0-10.

After playing so well in the first half and finding themselves level at the break, Port could have been disheartened, but they showed little sign of it. Robert Pigott and David Murphy pointed within minutes of the restart, as they looked to regain control of the game.

A powerful run from Donie Kingston ended with a well-taken point from Killeen, but Port were handed a major boost soon after. Shane Julian's high tackle on Colm Murphy earned him a second yellow card, and Arles were reduced to fourteen men. To compound matters Murphy slotted over the resulting free, before Steven Lyons was played through on goal, and he placed a shot to the bottom corner.

Killeen now found themselves five points down, but they responded superbly. A high ball into the square was fielded by Paul Kingston, and he made space for himself ten yards out before slotting to the net.

Steven Lyons hit back with a point for Port, but a double from Donie Kingston in response left just a point between them, 3-8 to 1-15, with ten minutes to go.

A Jason Enright free in the 55th minute then tied the scores, and then set up a tense finish to the game. In a truly frantic finale, both sides coughed up possession on a number of occasions, before Jake Foster put Port ahead with a lovely point from the right wing.

Jason Enright then levelled the scores with a free in the 62nd minute, but Port had a late chance to win it when they won a 45, but Brian McAuley's effort came up short, as the sides ended level.