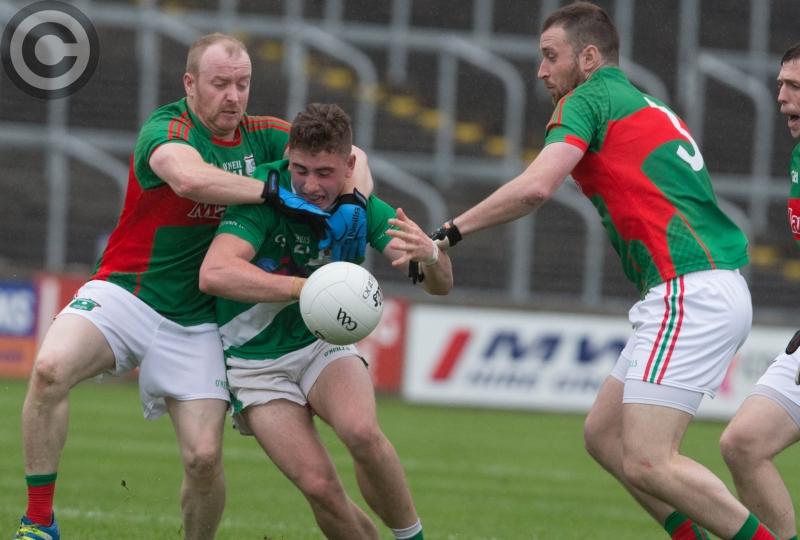 Graiguecullen edged out neighbours Killeshin in this Laois SFC Round 1 clash in O'Moore Park on Sunday night, as they held off a second half comeback to claim the win.

Two first half goals from Chris Hurley and Ambrose Doran had Graiguecullen in the driver's seat at half time, 2-7 to 0-7 in front, but they had to withstand a strong second half display from Killeshin to escape with the victory.

Killeshin jumped into an early lead thanks to a sweetly struck David Aston free from the right wing, made all the more impressive because it was into the breeze.

Ian Fleming pointed for Graigue in response, but Killeshin settled into the game much quicker, and soon went back in front. Cathal Brennan fired over a brace of points in the sixth and seventh minutes to push them two ahead, and even though Ambrose Doran hit back for Graigue, Killeshin kept pressing forward.

Aston pointed another tricky free and Eoin Lowry jinked away from his marker 25 yards out to put them 0-5 to 0-2 ahead.

Graiguecullen had no rhythm to their play early on, and when Brian Byrne missed a fairly straightforward free in the 12th minute, they looked to be in need of some inspiration.

That eventually came from an under-hit Shane Coakley kickout out, which fell in the grateful arms of the aforementioned Byrne. He laid the ball off to Chris Hurley, and his shot crept into the bottom corner to level the scores.

A minute later, a high ball into the Graiguecullen full-forward line saw Aaron Forbes break it down to Ambrose Doran, and he raced through to slot home their second goal.

Ambrose Doran (free) and Ross Hennessy added points to see Graiguecullen take a stranglehold on the game, as Killeshin were left stunned. Mark McDermott and Aston (free) hit back for them, either side of Brian Byrne point, but Graiguecullen were in full flow now.

They turned over possession in midfield on numerous occasions, and two more points before half time, from Hennessy and Danny Bolger (free) left them 2-7 to 0-7 ahead at the break.

After losing their way as the first half progressed, Killeshin needed to get themselves back into the game as early as possible in the second half, and that's exactly what they did. Mark McDermott pointed early on, and even though Ambrose Doran cancelled that out, Killeshin were starting to rediscover their form.

A wonderful left-footed point from David Aston got them back on track, and Aston would go on to kick the next three points, two from frees and one from play, to cut the Graiguecullen lead to just two points.

Mark Timmons then surged forward for Graiguecullen to round off a well-worked move, but Damien Lowry, on as a half-time substitute for Killeshin hit back with two points in a minute to leave just a point in it, 2-9 to 0-14, with nine minutes to go.

The pressure was building on Graigue, but a Brian Byrne point eased it a little, although Killeshin were still hot on their heels. Chris Hurley had a great goal chance soon after for Graigue, but Shane Coakley made the save and Barry Ryan then dived in to clear it from danger.

With a minute to go David Aston curled over another free to get the gap back down to one, but Killeshin could get no nearer than that, as a late Luke Alsybury point ensured Graiguecullen emerged with a narrow win.