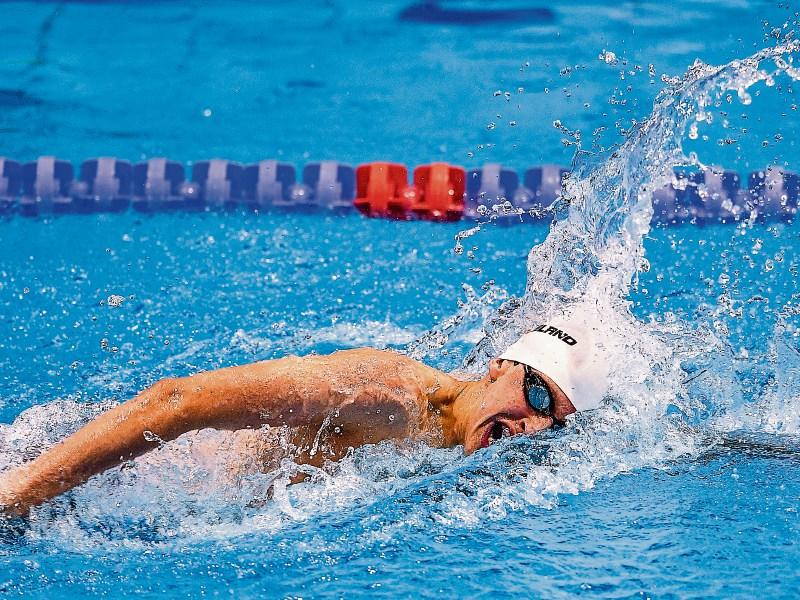 Portlaoise swimmer Sean Scannell landed back in Ireland over the weekend after a very successful trip to the European Youth Olympics in Hungary.

Scannell, 15, was the only Irish swimmer to qualify for a final at the event, where he placed sixth in the 200m backstroke. A backstroke specialist, Scannell also competed in the 100m backstroke and the 200m individual medley at the Games, recording PB times in all three events. He missed out on the final of the 100m backstroke by just 0.01 of a second.

To cap off the week, Scannell and his team mates Eoin Corby, Ethan Murtagh and Sean McNicholl broke the Irish Junior record in the 400m Medley Relay, etching their names into the history books in the process.

Sean is a member of the Kilkenny Swimming Club, where he is coached by John Duffy, but he lives in Portlaoise and attends Portlaoise CBS, where he completed his Junior Cert earlier this summer.

It takes a massive commitment from him to compete at this level, as he trains in Kilkenny five mornings a week, having to get up at 4.30am to be in the pool for 5.30am, so he can train for two hours and get back in time for school.

He trains in Kilkenny on Monday, Tuesday, Thursday, Friday and Saturday mornings, as well as Friday evenings, and also trains with the Irish team on Saturday evenings in the National Aquatic Centre.

The European Youth Olympics have been running since 1990, and were introduced to promote the Olympic ideals to young sportsmen and women across the continent. Sean's father, John, revealed to the Leinster Express on Monday that the whole experience made a big impression on Sean. "He came home and said it was the best experience of his life, they are mimicking the Olympics games, there is an Olympic village for the athletes.

"It was a fantastic experience, he has been on a few trips with Ireland before, but nothing like this."

The swimming season has more or less finished up for now, but it will begin again in earnest in September. With a new High Performance unit set to be rolled out by Swim Ireland in the near future, there is no reason to believe Sean won't continue to improve in the months and years ahead.

Those 4.30am starts can't be easy for Scannell, but they are certainly bearing fruit for the Portlaoise man, with a bright future and some big ambitions laid out ahead of him.